In all there are at least five locations in different countries that are claimed to be the Tomb of Noah. [1]

Shuaib, Shoaib or Shuʿayb, was an ancient Midianite Nabi (Prophet), sometimes identified with the Biblical Jethro. He is mentioned in the Quran a total of 11 times. He is believed to have lived after Ibrahim (Abraham), and Muslims believe that he was sent as a prophet to a community: the Midianites, who are also known as the Aṣ-ḥāb al-Aykah, since they used to worship a large tree. To the people, Shuʿayb proclaimed the faith of Islam and warned the people to end their fraudulent ways. When they did not repent, Allāh (God) destroyed the community. Shuʿayb is understood by Muslims to have been one of the few Arabian prophets mentioned by name in the Qur'an, the others being Saleh, Hud, and Muhammad. It is said that he was known by Muslims as "the eloquent preacher amongst the prophets", because he was, according to tradition, granted talent and eloquence in his language. 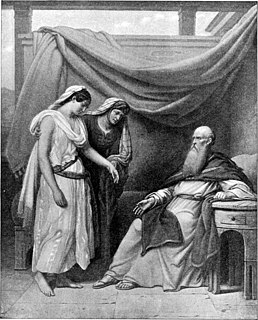 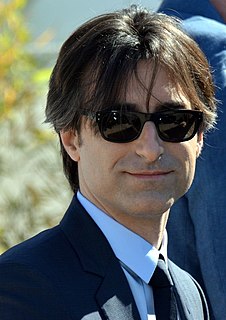 Noah Baumbach is an American filmmaker. He was nominated twice for the Academy Award for Best Original Screenplay for The Squid and the Whale (2005) and Marriage Story (2019), both of which he wrote and directed. He has written and directed a number of other films including Margot at the Wedding (2007), Frances Ha (2012), While We're Young (2014), Mistress America (2015), and The Meyerowitz Stories (2017).

Mitsuharu Misawa was a Japanese professional wrestler and promoter who worked for All Japan Pro Wrestling (AJPW) before forming Pro Wrestling Noah (NOAH). Alongside Toshiaki Kawada, Kenta Kobashi, and Akira Taue, Misawa was considered one of AJPW's Four Pillars of Heaven, whose matches developed the ōdō style of puroresu and received significant critical acclaim. Despite never working in the United States during the 1990s, Misawa had significant stylistic influence upon American independent wrestling through the popularity of his work among tape-traders in the country. However, while Misawa is widely regarded by industry journalists as one of the greatest professional wrestlers of all time, the physical demands and consequences of the style in which he worked and the circumstances of his death have made his legacy, or at least that of ōdō, somewhat problematic.

Ronald Eldon Wyatt was an adventurer noted for advocating the Durupınar site as the site of Noah's Ark, along with almost 100 other Bible-related alleged discoveries. He has been criticized by scientists, historians, biblical scholars, as well as some creationists. 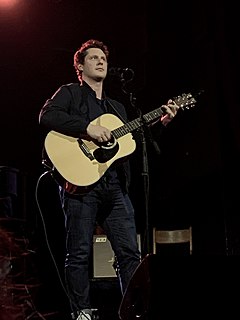 Noah Nicholas Reid is an American-Canadian actor, musician and former voice actor. He is known for his performances in several films and television series, including the critically acclaimed CBC comedy Schitt's Creek. In 2016, he received a Canadian Screen Award nomination for Best Original Song for his work in the feature film People Hold On. In 2019, he won a Canadian Screen Award for Best Supporting Actor in a Comedy for his work on Schitt's Creek.

Joakim Simon Noah is a professional basketball player for the Los Angeles Clippers of the National Basketball Association (NBA). Born in New York City to a Swedish mother and a French father, he holds American, Swedish and French citizenship. He played college basketball for the Florida Gators, winning back-to-back NCAA championships in 2006 and 2007. The Chicago Bulls selected Noah with the ninth overall pick in the 2007 NBA draft. Noah is a two-time NBA All-Star and was named to the All-NBA First Team in 2014 when he also was named the NBA Defensive Player of the Year. He represented France in international competitions.

Noahidism or Noachidism is a monotheistic belief system. A branch of Judaism, it is based upon the Seven Laws of Noah and their traditional interpretations within Rabbinic Judaism. According to the Jewish law, non-Jews (Gentiles) are not obligated to convert to Judaism, but they are required to observe the Seven Laws of Noah to be assured of a place in the World to Come, the final reward of the righteous. The divinely ordained penalty for violating any of these Noahide Laws is discussed in the Talmud, but in practical terms it is subject to the working legal system which is established by the society at large. Those who subscribe to the observance of the Noahic Covenant are referred to as B'nei Noach or Noahides. The modern Noahide movement has been founded by Orthodox rabbis from Israel, mainly tied to Chabad-Lubavitch and Religious Zionist organizations. 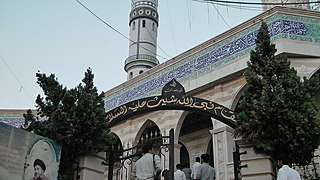 Al-Nabi Sheeth is a village in the Beqaa Valley of Lebanon. "Al-Nabi Sheeth" is Arabic for "Seth the prophet". The village was called by that name because it is considered to contain the burial site of Seth son of Adam. A mosque was built on the burial site and it contains the grave of Seth inside the mosque.. The village is also the home town of Abbas al-Musawi former Hezbollah leader and influential shia cleric. The village of Al-Nabi Sheeth is predominantly inhabited by people with the surnames Helbawi, Al-Moussawi, Hazimeh, & Chokr families being well known.

Karak is a village in Zahlé District, Beqaa Governorate, Lebanon. It is located on the Baalbek road close to Zahle. Karak contains a sarcophagus claimed by the locals to be the tomb of Noah.

Noah Lindsey Cyrus is an American singer, songwriter, and actress. In 2016, she released her debut single "Make Me (Cry)", featuring vocals from Labrinth.

Trevor Noah is a South African comedian, political commentator, and television host. He is the current host of The Daily Show, an American satirical news program on Comedy Central.

Yuval Noah Harari is an Israeli historian and a professor in the Department of History at the Hebrew University of Jerusalem. He is the author of the popular science bestsellers Sapiens: A Brief History of Humankind (2014), Homo Deus: A Brief History of Tomorrow (2016), and 21 Lessons for the 21st Century (2018). His writings examine free will, consciousness, intelligence and happiness.

Noah Gregory Centineo is an American actor and model. He is known for his roles in the final three seasons of the television series The Fosters, the Disney Channel film How to Build a Better Boy (2014), and the 2018 Netflix romantic comedy films To All the Boys I've Loved Before and Sierra Burgess Is a Loser. 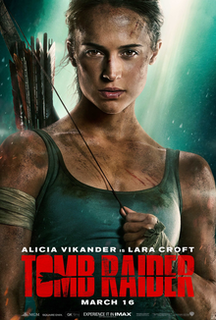 Tomb Raider is a 2018 action adventure film directed by Roar Uthaug, with a screenplay by Geneva Robertson-Dworet and Alastair Siddons, from a story by Evan Daugherty and Robertson-Dworet. An American and British co-production, it is based on the 2013 video game of the same name, with some elements of its sequel by Crystal Dynamics, and is a reboot of the Tomb Raider film series. The film stars Alicia Vikander as Lara Croft, who embarks on a perilous journey to her father's last-known destination, hoping to solve the mystery of his disappearance. Dominic West, Walton Goggins, Daniel Wu, and Kristin Scott Thomas appear in supporting roles.

Noah Lyles is an American professional track and field athlete specializing in the sprints. He holds personal bests of 9.86 seconds for the 100 meters and 19.50 seconds for the 200 meters. Lyles is the 300-meters indoor world record holder with a time of 31.87 seconds from the 2017 USA Indoor Championships.

Noah Igbinoghene is an American football cornerback for the Miami Dolphins of the National Football League (NFL). He played college football at Auburn, and was drafted by the Dolphins in the first round of the 2020 NFL Draft.