"Tomcat Prowl", written by Doug Bennett and John Burton, is a song performed by Doug and the Slugs for the soundtrack to the 1988 action film Iron Eagle II . It was the group's second-highest charting single in their native Canada, reaching #23 on the RPM Top 100 Singles chart. It also appears on the group's 1988 album Tomcat Prowl and was also released on their 1993 best-of Slugcology 101. 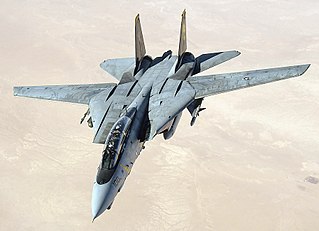 The Grumman F-14 Tomcat is an American supersonic, twin-engine, two-seat, twin-tail, variable-sweep wing fighter aircraft. The Tomcat was developed for the United States Navy's Naval Fighter Experimental (VFX) program after the collapse of the F-111B project. The F-14 was the first of the American Teen Series fighters, which were designed incorporating air combat experience against MiG fighters during the Vietnam War. 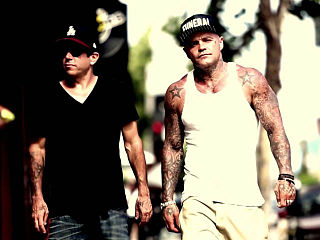 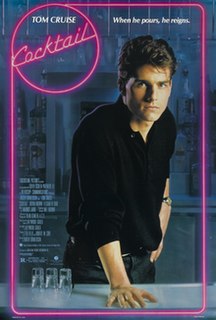 Cocktail is a 1988 American romantic comedy-drama film directed by Roger Donaldson and written by Heywood Gould, whose screenplay was based on his book of the same name. The film tells the story of a young New York City business student, Brian Flanagan, who takes up bartending in order to make ends meet. The film stars Tom Cruise, Bryan Brown, and Elisabeth Shue.

A slug is a gastropod mollusk without a shell or with a very small internal shell.

Douglas Craig Bennett was the lead singer of Canadian rock band Doug and the Slugs. He also produced and directed music videos for artists such as Headpins, Trooper, Zappacosta, and Images in Vogue as well as for the Slugs themselves.

Strike Fighter Squadron 103 (VFA-103), nicknamed the Jolly Rogers is an aviation unit of the United States Navy established in 1952. VFA-103 flies the F/A-18F Super Hornet and is based at Naval Air Station Oceana, Virginia (US). The squadron's radio callsign is Victory and it is assigned to Carrier Air Wing Seven. 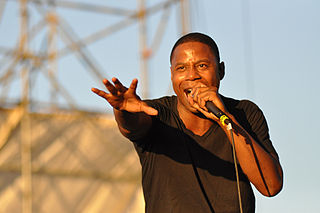 Ol' 55 were an Australian band specialising in retro, 1950s-era Rock 'n' Roll. They formed as Fanis in 1972 in Sutherland, Sydney. Drummer Geoff Plummer was working with Glenn A. Baker at the NSW Department of Media and invited Baker to hear his part-time band, including Patrick "Meatballs" Drummond, Rockpile Jones and Jimmy Manzie. In 1975, Baker took on their management, renamed them as Ol' 55 for the Tom Waits song, and recruited front man Frankie J. Holden and, later in the year, saxophonist Wilbur Wilde.

James William Manzie, known as Jimmy Manzie or Jim Manzie, is an Australian musician and songwriter for a variety of bands including rock revival band Ol' 55 (1975–1979), pop groups The Breakers (1979–1982) and The Fives (1982) before turning to solo work, production and composing for film/television scores and soundtracks. As a member of Ol' 55, Manzie wrote "On the Prowl" their top 20 hit single on the Australian Kent Music Report in late 1975, which was followed by their debut album, Take It Greasy which reached No. 3 on the Kent Music Report Albums Chart in 1976.

July is a psychedelic rock band from Ealing, London that was professionally active between 1968 and 1969, and reformed in 2009. The band's music was a blend of psychedelic rock and psychedelic pop, marked by lush harmonies, acoustic guitars, keyboards, and intricate lead guitar work. Although none of the band's records managed to chart in the UK or the U.S., July are today best remembered for their songs "My Clown", "Dandelion Seeds", and "The Way", which have all been included on a number of compilation albums over the years.

Music for the Hard of Thinking is the third studio album for Canadian pop music group Doug and the Slugs. It was released domestically in 1982 on Bennett's own record label Ritdong and internationally in 1983 by RCA Records. This recording helped get the band nominated for a 1983 Juno Award.

Fosterchild was a notable Canadian band that existed from 1976 to 1981, releasing three albums.

"On the Prowl" is a song written by Jimmy Manzie and recorded by Australian band Ol' 55. The song was released in May 1976 as the lead single from the band's debut studio album, Take It Greasy (1976). The song peaked at number 14 on the Australian Kent Music Report, becoming the band's first top 50 single.