Deon de Lange is the creator of the comic, Gofu, and launched the Tomica webcomic in April 2014 with collaborator, David Covas Lourenco. A limited edition of 50 copies of a Tomica mini comic were for sale at Reader's Den Free Comic Book Day 2014. [3]

The Tomica webcomic is also collected and printed in a unique mini-comic format, starting with Tomica #1. [1]

At San Diego Comic-Con International 2014, Tomica mini-comic #1 was available as a free giveaway at a panel about comics from South Africa and Australia: “The Pursuit of the Southern Hemisphere Comics Industry”. [4]

Webcomics are comics published on a website or mobile app. While many are published exclusively on the web, others are also published in magazines, newspapers or in comic books.

The Will Eisner Comic Industry Awards, commonly shortened to the Eisner Awards, are prizes given for creative achievement in American comic books, sometimes referred to as the comics industry's equivalent of the Academy Awards. They are named in honor of the pioneering writer and artist Will Eisner, who was a regular participant in the award ceremony until his death in 2005. The Eisner Awards include the Comic Industry's Hall of Fame.

Bongo Comics Group was a comic book publishing company founded in 1993 by Matt Groening along with Steve & Cindy Vance and Bill Morrison. It published comics related to the animated television series The Simpsons and Futurama, as well as the SpongeBob SquarePants comic, along with original material. It was named after Bongo, a rabbit character in Groening's comic strip Life in Hell.

Svetlana Chmakova is a Russian and Canadian comic artist. She is best known for Dramacon, an original English-language (OEL) manga spanning three volumes and published in North America by Tokyopop. Her other original work includes Nightschool and Awkward for Yen Press. She has been nominated for an Eisner Award twice. Previously, she created The Adventures of CG for CosmoGIRL! magazine and the webcomic Chasing Rainbows for Girlamatic. 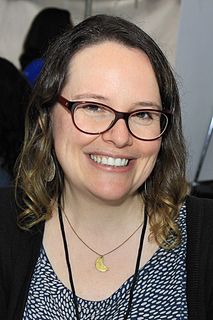 Raina Telgemeier is an American cartoonist whose works include the autobiographic webcomic Smile , which was published by Scholastic Press's Graphix imprint as a full-color graphic novel in February 2010. Smile, as well as the follow-up Sisters and the fiction graphic novel Drama have all been on The New York Times Best Seller lists. She has also written and illustrated Ghosts and four graphic novels adapted from The Baby-Sitters Club by Ann M. Martin. A sequel to Telgemeier's Smile and Sisters titled Guts was released in fall 2019.

Platinum Studios, Inc. is a media company based in the United States. It controls a library of thousands of comic-book characters, which it seeks to adapt, produce, and license for all forms of media. The company has released films and/or television programming with Universal Studios, Paramount Pictures, DreamWorks, MGM, Showtime, and Lions Gate. Platinum has developed film or television with others, including The Walt Disney Company, Time-Warner's New Line Cinema, 20th Century Fox and Sony Pictures Entertainment.

D. J. Coffman is an American cartoonist. He is best known as the creator of the Hero by Night comic book series and the webcomic Yirmumah. Coffman also has done work on the Monkey Man comic series with writer Brian Lynch that included a webcomic on Kevin Smith's MoviePoopShoot.com.

Dave Kellett is the creator and cartoonist of two webcomic titles, Sheldon and Drive, and the co-author of How To Make Webcomics.

The Ongoing Adventures of Rocket Llama is a webcomic starring "a high-flying llama, a sword-swinging cat, and a rocket as loyal as a cowboy hero's horse." Created by Alex Langley while he was a student at Henderson State University, the comic first appeared in a comic book titled The Workday Comic. 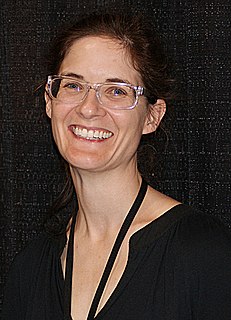 Kathryn Immonen is a Canadian comic book and webcomic writer. She has written a number of comic books for Marvel Comics since 2007, in collaboration with her husband Stuart.

Pop! Goes the Icon or PGTI, is an independent American comic book publisher based in Las Vegas, Nevada.

A South African comic is a book or periodical published in South Africa that contains sequential comic art stories.

Gofu is a South African comic book, written, drawn and self published in 2013 by Deon de Lange. It is Deon de Lange's first comic book and was launched at the Open Book Comics Fest 2013 in Cape Town. Gofu was also launched at Four Shots, a Durban comic launch, where the author announced that the title would become a limited mini-series publication. It is a short black and white fantasy comic book, rendered in fine detail and beautifully printed in a large, European comics format.

She Makes Comics is a 2014 documentary film about the history of women in the comic book industry since the medium's beginnings in the early 1900s. It features interviews with key industry professionals, including artists, writers, editors, and retailers, as well as with prominent members of the surrounding fan culture.

Webcomics in France, literally "bande dessinée en ligne", are usually referred to as either blog BD or BD numérique. Early webcomics in the late 1990s and early 2000s primarily took on the form of personal blogs, where amateur artists told stories through their drawings. The medium rose in popularity in economic viability in the country in the late 2000s and early 2010s. The Turbomedia format, where a webcomic is presented more alike a slideshow, was popularized in France in the early 2010s.