Reato was born in Rovigo, and plays for Rugby Rovigo in the Top12. Reato's position of choice is at Lock. 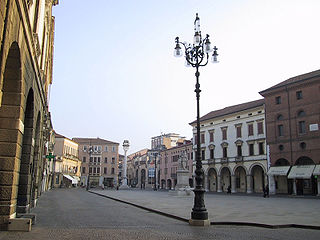 Rovigo is a town and comune in the Veneto region of Northeast Italy, the capital of the eponymous province.

The Top12 is the highest tier of the national rugby union competition in Italy. The first Italian championship took place in 1929, contested by six of the sixteen teams that existed in Italy at that time.

He was called up to the Italy squad for the 2008 Six Nations Championship. [1]

Rugby Rovigo Delta, formerly known until 2010 as Rugby Rovigo, is an Italian rugby union club currently competing in the Top12. They are based in Rovigo, in Veneto. The club were founded in 1935 by medical student Dino Lanzoni, who discovered rugby at university. They quickly became one of the strongest Italian sides and won 12 titles between 1951 and 2016. They have never been relegated from the top flight of Italian rugby union.

Andrea Lo Cicero Vaina is an Italian rugby union footballer, who retired from playing in 2013.

Alessandro Moscardi is a former Italian rugby union player. He played as an hooker.

Pablo Canavosio is an Italian Argentine rugby union footballer. Canavosio played for Rovigo, Calvisano, Castres Olympique and Aironi. His usual position is at scrum half or wing.

Carlo Checchinato is an Italian rugby union former player and is the current team manager for the Italian national team. 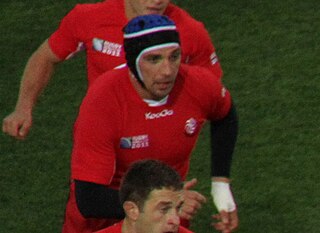 Ilia Zedginidze is a Georgian former rugby union player. He played as a lock, number 8, and flanker and was a lineout specialist. A member of their inaugural World Cup side in 2003, he captained the Georgia national rugby union team in the 2007 tournament, but was forced out of the squad because of an injury. This injury ultimately led to him announcing his retirement from international rugby, after gaining 48 caps. He returned to the squad in late 2008, playing against Scotland A and taking part in the 2009 European Nations Cup, where he scored a game-saving try against Portugal on 14 February 2009.

Joseph Michael McDonnell, is a rugby union coach who played eight tests for New Zealand. As of 2008 he plays for Newcastle Falcons in the Guinness Premiership and in 2009 he has joined the CR El Salvador. As of 2017, he is the head coach of Rugby Rovigo Delta.

Matteo Mazzantini is an Italian rugby union footballer. His position in the field is as a scrum-half.

Antonio Pavanello is an Italian rugby union player. His preferred position is in the Second Row although he can also play equally well in the back-row. He currently plays for Benetton Treviso in the Pro14 competition and the European Heineken Cup.

Jean-François Montauriol in Toulouse, France is a Franco-Italian rugby union player. His preferred position is in the Back Row although he can also play equally well in the Second Row. He currently plays for Rugby Rovigo in the Top12. He began his career at his hometown club Stade Toulousain but was never a regular first-XV player. He moved to Venezia before the start of the 2008-09 season, where his performances were rewarded with a call-up to the Italy squad for the match against England in the 2009 Six Nations Championship. He came on as a replacement for the final 4 minutes of the game at Twickenham, winning his first cap. He was also selected on Italy's 2009 summer tour to Australia and New Zealand. He won his second cap against Australia in Melbourne on this tour.

Riccardo Bocchino is an Italian rugby union player. Bocchino, who is a fly-half, plays his club rugby for Aironi. He made his debut for Italy against Ireland on 6 February 2010.

Julian Michael Gardner is an Australian-Italian former international rugby union player and a current coach. He played as a flanker.

Christiaan Jacobus 'Jacques' Momberg is a South African rugby union player, currently playing as a hooker for Italian Top12 side Rovigo. He previously played for the Pumas in the Vodacom Cup and Currie Cup competitions, and for Blue Bulls and UP Tuks.

Daniël Jacobus Mienie is a South African rugby union player for Rovigo in the Top12 in Italy. His regular position is prop.

Cristian Daniel Săuan is a former Romanian rugby union player. He played as a wing.

Tito Lupini is a former South African-born Italian rugby union player who played as a prop.