The Tommy Bartlett Show, previously known as the Tommy Bartlett's Water Ski & Jumping Boat Thrill Show, was a popular tourist attraction in Wisconsin Dells, Wisconsin. The show was created in 1952 by Wisconsin showman Tommy Bartlett as a traveling group of entertainers, based in Chicago, Illinois. After changing its base of operations to Wisconsin Dells, the performers continued to tour, performing at World's Fairs and U.S.O. shows. According to the show's official website, over 20 million spectators have seen the show since its creation.[ citation needed ]

The Wisconsin Dells show was performed between late May and early September on Lake Delton. In keeping with the tourist-centered economy of Wisconsin Dells, the show operates regardless of rain, and was generally canceled only when weather is dangerous, rather than simply inclement. Despite the fact that the show took place entirely on the lake, Bartlett himself apparently only waterskiied once, on his 70th birthday, 32 years after the show's creation.

On September 16, 2020 the show announced it would permanently close due to financial losses from the COVID-19 pandemic.

On June 7, 2008, the Bartlett show closed when Lake Delton, the body of water where the show takes place, flooded after torrential rains, and two days later, breached the embankment surrounding it, draining the lake almost completely, in particular the area of the show's grandstand. [1]

The show reopened on Thursday, June 12, but without its famous water skiers. They, like Lake Delton, were gone for the rest of the 2008 season. [2] [3]

Even with the land show that was put in place, 2008 show numbers were down almost 90%. The show was improvised with a beached island and by pulling legends like "Sound Effects Guy" Wes Harrison out of retirement. [4]

Another setback occurred the first week of July, 2008. Many of Tommy Bartlett's employees live in trailers on company premises, as most are college students there for summer employment. On Wednesday, July 8, a fire broke out in one of the trailers, damaging four mobile homes on the premises, and causing $100,000 worth of damage. Tom Diehl was quoted as saying, "another emotional setback for everyone". [5]

The PS Lady Elgin was a wooden-hulled sidewheel steamship that sank in Lake Michigan off the fledgling town of Port Clinton, Illinois, whose geography is now divided between Highland Park and Highwood, Illinois, after she was rammed in a gale by the schooner Augusta in the early hours of September 8, 1860. The passenger manifest was lost with the collision, but the sinking of Lady Elgin resulted in the loss of about 300 lives in what was called "one of the greatest marine horrors on record". Four years after the disaster, a new rule required sailing vessels to carry running lights. The Lady Elgin disaster remains the greatest loss of life on open water in the history of the Great Lakes.

Wisconsin Dells is a city in south-central Wisconsin, with a population of 2,678 people as of the 2010 census. It straddles four counties: Adams, Columbia, Juneau, and Sauk. The city takes its name from the Dells of the Wisconsin River, a scenic, glacially formed gorge that features striking sandstone formations along the banks of the Wisconsin River. Together with the nearby village of Lake Delton, the city forms an area known as "The Dells", a popular Midwestern tourist destination. 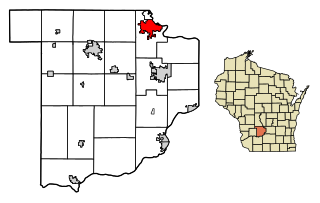 Lake Delton is a village located on the Wisconsin River in Sauk County, Wisconsin, United States. The population was 2,914 at the 2010 census. It also makes it the largest community in the Dells area passing the Wisconsin Dells. Lake Delton, along with the nearby Wisconsin Dells, is a resort area and a major center for tourism. 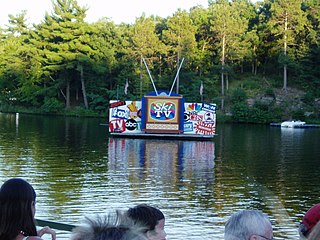 Lake Delton is a man-made freshwater lake in Sauk County in central Wisconsin. For much of 2008, it was a mostly empty lake basin after a portion of a county highway that forms part of the dike wall eroded on June 9, 2008, under the pressure of floods in the area. The resulting washout caused the lake to empty, leaving behind only rainwater pools and the flow from Dell Creek. By March 2009, major repairs to correct the problem were completed, and the lake was allowed to refill. Minor repairs were expected to continue after that time, but the lake is now completely refilled and has been usable since Memorial Day weekend of 2009.

Noah's Ark is the largest water park in the United States. It features 51 water slides and dozens of various attractions. The park is located in the village of Lake Delton, Wisconsin.

Mt. Olympus Water and Theme Park is a theme park and water park resort complex in Wisconsin Dells, Wisconsin. The resort is themed after Ancient Greece, particularly its mythology and gods, and is named after the mountain in Greece where those gods were said to live. Mt. Olympus features an indoor and outdoor water park and amusement park rides, and the complex includes dozens of motel buildings that were acquired by the resort in addition to its purpose-built hotel.

Thomson "Tommy" Bartlett was an American showman and entertainment mogul from Wisconsin. He is most often associated with the water skiing thrill show based in Wisconsin Dells, Wisconsin, known as Tommy Bartlett's Thrill Show. The success of this and other traveling water ski shows led to Bartlett's induction into the Water Ski Hall of Fame in 1993. His shows have toured the United States, the Far East, and four World Fairs, and have been seen by 50 million spectators. 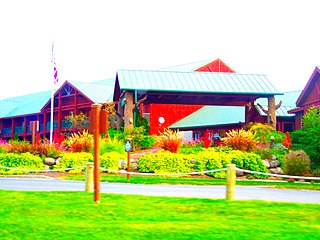 Wilderness Hotel & Golf Resort is a large water resort in Wisconsin Dells, Wisconsin. It is one of the largest indoor waterpark complexes in the world with a combined size of 240,000 square feet (22,000 m2). It is part of a chain of two resorts, the newer and smaller one being Wilderness at the Smokies in Tennessee. The chain also includes four small outdoor waterparks.

WNNO-FM is a Hot AC music formatted radio station. WNNO is a sister station to WDLS AM 900. Its station is located in the vacation mecca of Wisconsin Dells and Lake Delton, and its signal can be reached out to Portage, Poynette, Baraboo, Lyndon Station, and Adams-Friendship, as well as the northern tier of the Madison Metro area.

The Seth Peterson Cottage is a two-room lakeside cottage located in Mirror Lake State Park outside Lake Delton, Wisconsin, United States. It was designed by Frank Lloyd Wright in 1958.

The tornado outbreak sequence of June 3–11, 2008 was a series of tornado outbreaks affecting most of central and eastern North America from June 3–11, 2008. 192 tornadoes were confirmed, along with widespread straight–line wind wind damage. Seven people were killed from a direct result of tornadoes; four in Iowa, two in Kansas, and one in Indiana. Eleven additional people were killed across five states by other weather events including lightning, flash flooding, and straight-line winds. Severe flooding was also reported in much of Indiana, Wisconsin, Minnesota and Iowa as a result of the same thunderstorms, while high heat and humidity affected much of eastern North America; particularly along the eastern seaboard of the United States from New York City to the Carolinas. 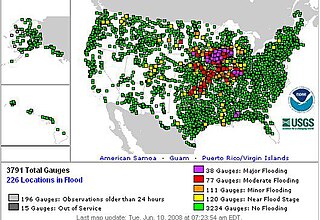 The June 2008 Midwestern United States floods were flooding events which affected portions of the Midwestern United States. After months of heavy precipitation, a number of rivers overflowed their banks for several weeks at a time and broke through levees at numerous locations. Flooding continued into July. States affected by the flooding included Illinois, Indiana, Iowa, Michigan, Minnesota, Missouri and Wisconsin. The American Red Cross assisted the victims of flooding and tornadoes across seven states and the National Guard was mobilized to assist in disaster relief and evacuation.

Dell Creek is a warm freshwater stream that lies in northeastern Sauk County and southern Juneau County in central Wisconsin. Dell Creek was named from the dells which occur along its course. Dell Creek is a warm water sport fishery for the lower 1.5 miles and a Class II trout stream for the upper 10.5 miles of its length. The creek is classified as an exceptional resource water. Much of Dell Creek's length in Sauk County is publicly owned.

Baraboo–Wisconsin Dells Airport is a public use airport located three nautical miles (6 km) northwest of the central business district of Baraboo, in Sauk County, Wisconsin, United States. The airport is located between Baraboo and Lake Delton, Wisconsin on US 12 and it is adjacent to the Ho-Chunk Casino.

The Wonder Spot was a tourist attraction located off US Route 12 in Lake Delton, Wisconsin from 1949 to 2006. A popular side trip for visitors to nearby Wisconsin Dells, the Wonder Spot was advertised as a place "where the laws of natural gravity seem to be repealed." Visitors walked down a ravine into a cabin, where seemingly no one could stand up straight, water flowed backwards, and chairs could be balanced on two legs. Guides attributed the effects to igneous rock formations, but in truth, the cabin was built perpendicular to a hillside, and the purported gravitational anomalies were merely optical illusions. 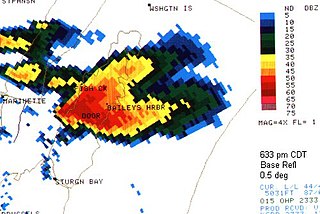 The Upper Great Lakes severe weather outbreak of August 23, 1998 was a severe weather outbreak that affected parts of Wisconsin, and the Upper Peninsula of Michigan. The outbreak occurred on August 23, 1998 and caused millions of dollars in damage to the region. One fatality is attributed to this severe weather event, when a severe thunderstorm knocked a tree onto a camper killing its sole occupant. A supercell spawned a F3 tornado that ripped across Door County causing $6.5 million in damages. It was the 8th most costly tornado in Wisconsin history injuring two people, destroying multiple structures and disrupting the regional economy and tourism. Two storms moved through the Fox Valley producing a minimal F0 tornado, but devastating amounts of hail. Damages from the hail were estimated to be around $5 million and damaged many structures and vehicles. Wisconsin Governor Tommy Thompson requested a Presidential Disaster Declaration from President Bill Clinton for the disaster, but was denied.