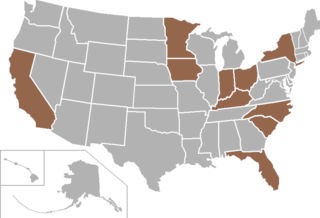 The Pioneer Football League (PFL) is a collegiate athletic conference which operates in the United States. The conference participates in the NCAA's Division I Football Championship Subdivision (FCS) as a football-only conference. It has member schools that range from New York, North Carolina, and Florida in the east to California in the west. It is headquartered in St. Louis, in the same complex that also contains the offices of the Missouri Valley Conference and Missouri Valley Football Conference. Unlike most other Division I FCS conferences, the Pioneer League consists of institutions that choose not to award athletic scholarships ("grants-in-aid") to football players.

Thomas Henry Nobis Jr. was an American football linebacker who played in the National Football League (NFL) for eleven seasons with the Atlanta Falcons. He played college football at the University of Texas and was the first overall selection in the 1966 NFL draft.

Vivian Patrick Campbell is a Northern Irish born Irish rock guitarist. He came to prominence in the early 1980s as a member of Dio, and has been a member of Def Leppard since 1992 Campbell has also worked with Thin Lizzy, Whitesnake, Sweet Savage, Trinity, Riverdogs, and Shadow King.

Lord Beaverbrook High School (LBHS) is a public high school in Calgary, Alberta, Canada operated by the Calgary Board of Education. It was founded in 1967 and the first year of attendance was in 1968. It has approximately 1,100 students and 100 staff members. It is named after Max Aitken, Lord Beaverbrook. The school's mascot is a "Lord"—a black, silver, and white lion wearing a crown.

Thomas Black may refer to:

The 2004 Auburn Tigers football team represented Auburn University in the 2004 NCAA Division I-A football season. Auburn compiled a record of 13–0, winning the Southeastern Conference championship and finishing the season ranked #2 in both the AP Poll and the Coaches' Poll. Beginning the season ranked #17 in the AP poll and #18 in the Coaches' Poll, the Tigers were denied a berth in the BCS National Championship Game because they finished the regular season ranked #3 in the BCS rankings. Head coach Tommy Tuberville, who was nearly fired after the 2003 season, was named national Coach of the Year by the Associated Press. This was Auburn's third undefeated season in which they played over ten games.

The 1920–21 Scottish Cup was the 43rd staging of Scotland's most prestigious football knockout competition. The Cup was won for the first time in their history by Partick Thistle who defeated Rangers in the final. Thistle played 11 matches in their cup run. The defending champions Kilmarnock were defeated in the second round by Aberdeen.

The 1943–44 season was the 71st season of competitive football in Scotland and the fifth season of special wartime football during World War II.

The 1959 Philadelphia Eagles season was the franchise's 27th season in the National Football League. They improved on their previous output of 2–9–1, winning seven games. The team failed to qualify for the playoffs for the tenth consecutive season.

In Liverpool F.C. seventh season in Division Two and Bill Shankly's second season as manager and first full season at the club. The rebuilding of the club continued with them ending third in the table and being knocked out early in the FA Cup and the newly formed Football League Cup.

Tommy Coyle is a British former professional boxer who competed from 2009 to 2019. He held the Commonwealth lightweight title in 2018, and has challenged once for the British light-welterweight title in 2016. He is the older brother of Leeds United footballer Lewie Coyle.