McColl played his youth football for Dennistoun Juniors in Scotland. [1]

He later moved to Australia where he played for Adelaide Juventus and Melbourne Juventus. [1] [3]

In late 1970 terms were agreed to the transfer of McColl from Melbourne Juventus to Auburn in Sydney for $6,000. In January 1971 when he had not arrived in Sydney, Auburn officials were told he was on his way to Sydney. It was later found that he was in Rhodesia where he had requested a transfer to Chibuku FC. [4] [5]

After playing several seasons in Rhodesia, McColl in 1975 appealed to FIFA to secure a release from Chibuku. [6]

In 1977 McColl signed for Frankston City in Melbourne. [7]

McColl made his debut for Australia in November 1967 against New Zealand in Saigon. He played his final match in December 1969 against Israel in Tel Aviv having played 19 times for Australia and scoring eight goals. [3] [8]

Scott Alexander Jamieson is an Australian soccer player who plays for Melbourne City in the A-League.

Mark Bresciano is an Australian former professional football (soccer) player who played as a midfielder. 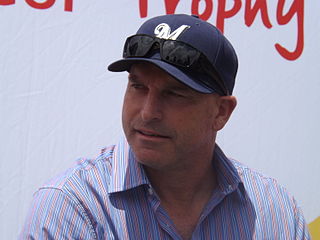 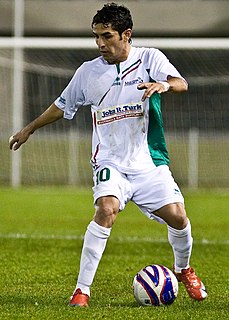 Ali Abbas is an Iraqi-Australian footballer who plays for the Newcastle Jets in the A-League and the Iraq national team.

Mehmet Duraković is an Australian football (soccer) coach and former player who currently work as coach for Malaysian Super League club Perak FC. Born in Titograd, Yugoslavia, now Podgorica, Montenegro, he spent his playing career as a defender for a number of clubs in the Australian National Soccer League, with a brief stint in Malaysia with Selangor FA. Duraković made 64 appearances and scored six goals for the Australian national team.

Ernie Tapai is a former Australian soccer player who spent the majority of his career in the Australian National Soccer League (NSL). He also had stints in England, Portugal and Singapore. Tapai played 52 times for Australia, including 37 times in full international matches.

Lisa Marie De Vanna is an Australian professional soccer player who plays as a forward for W-League team Melbourne Victory, and has played for the Australian national team. She is noted for her pace and dribbling skills. She is regularly considered one of the greatest female footballers in the world; football analyst and former Socceroo Craig Foster stated that she "ran on jet-fuel; burning up twice as fast, but with incredible impact."

James Troisi is an Australian professional football (soccer) player who plays for Western Sydney Wanderers in the A-League.

Laura Brock is an Australian soccer player who plays for EA Guingamp in the Division 1 Féminine. She made her debut for the national team in 2010. 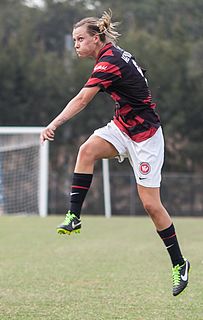 Emily Louise van Egmond is an Australian footballer who plays as a midfielder for West Ham United in the English FA Women's Super League, as well as the Australia national team. She previously played for German side 1. FFC Frankfurt and VfL Wolfsburg in the Bundesliga, Danish side Fortuna Hjørring in the Elitedivisionen, Chicago Red Stars and Orlando Pride in the NWSL as well as Canberra United, Western Sydney Wanderers, Newcastle Jets and Melbourne City in Australia's W-League.

Robert Barry Lionel "Bobby" Chalmers is a former association football forward who played professionally for the Rhodesia national team and various clubs in South Africa, where he scored 303 goals in all competitions, making him the all-time top goalscorer in the now-defunct South African National Football League. Chalmers captained the Rhodesian team during its unsuccessful attempt to qualify for the 1970 FIFA World Cup, and was its leading goalscorer. In a profile published in 1980, Chalmers was described by journalist Glen Byrom as a "perfect gentleman and sportsman ... Southern Africa's crown prince of soccer".

Ken Worden is an English-born football coach and a former player.

Keith Webster is an English former footballer who played as a winger in the Football League for Darlington.

Joshua Hope is an Australian former professional footballer who last played as an attacking midfielder for Melbourne Victory in A-League.

Stan Bourke was a former Australian professional soccer player who played as a forward. He had three caps for the Australia national soccer team.