Thomas Paterson (born 30 March 1954 in Ashington) is an English former professional footballer who played in the Football League, as a forward.

Paterson is a Scottish and Irish surname meaning "Fathers' son" or "son of Patrick". In Connacht, and Ulster, the name is considered to be an Anglicised form of the Irish language surname Ó Casáin. Paterson is rarely used as a given name. There are other spellings, including Patterson. Notable people with the surname include: 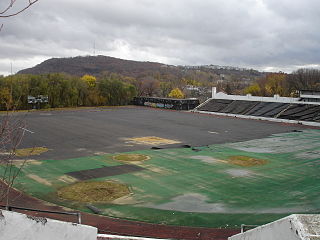 Hinchliffe Stadium is a 10,000-seat stadium located in Paterson, New Jersey, USA. The venue was completed in 1932 and sits on a dramatic escarpment above Paterson's National Historic Landmark Great Falls, and surrounded by the city's National Landmark Historic District, the first planned industrial settlement in the nation. It is one of only a handful of stadiums surviving nationally that once played host to significant Negro league baseball during America's Jim Crow era. The stadium was designated a National Historic Landmark in March 2013 and a Paterson Historic Landmark in May 2013. In December 2014 legislation passed in the United States Congress to include the stadium in the Great Falls National Landmark District.

Eastside High School is a four–year public high school located in Paterson section of Passaic County, New Jersey, United States, that serves the eastern section of Paterson. The nickname "Ghosts" for the school's athletic teams derives from a cemetery used in the 1800s that stood at the site of the current high school building. EHS, which serves grades students in ninth through twelfth grades, operates as part of the Paterson Public Schools. The school has been accredited by the Middle States Association of Colleges and Schools Commission on Secondary Schools since 1928. Eastside High School opened on February 1, 1926. The school mascot is the Ghost.

John F. Kennedy Educational Complex is a four-year public high school in Paterson, New Jersey, United States, that serves the western section of Paterson. Kennedy High School, which serves students in ninth through twelfth grade, is a part of the Paterson Public Schools. 93% of the students are of minority races, and a majority of them speak either a non-English language at home or are very limited in English. The school uses the Infinite Campus school management system for tasks such as student attendance and grading, and full online grade access is available online.

Thomas Smith Cummings was an English football player and manager.

Craig Paterson is a Scottish former football player, who currently works as a pundit for BBC Radio Scotland and Sportscene.

James Paterson may refer to:

Tewfik Abdullah was an Egyptian football player, He was the second Egyptian to play in the English Football League and the first in the First Division. He was one of four Egyptians who played professional football in Britain before World War Il.

During the 2007–08 English football season, Scunthorpe United F.C. competed in the Football League Championship and in the second tier of English football for the first time since 1964, following promotion from League One the previous season.

Tommy Duggan was an American soccer outside right who played in both the National Association Football League and American Soccer League. He is a member of the National Soccer Hall of Fame.

Thomas Paterson (1882–1952) was an Australian farmer and politician.

Jamie Charles Stuart Paterson, is an English footballer who plays for Bristol City. He can operate as both a winger and forward.

During the 1947–48 English football season, Brentford competed in the Football League Second Division. In the Bees' first second-tier season since 1934–35, the club slumped to a 15th-place finish.