Tommy Pranata (born in Padang, West Sumatra, December 12, 1982) is an Indonesian footballer who plays as a midfielder.

Bacharuddin Jusuf Habibie was an Indonesian engineer and politician who was the third president of Indonesia from 1998 to 1999. Less than three months after his inauguration as the seventh vice president in March 1998, he succeeded Suharto who resigned after 31 years in office. His presidency is seen as a landmark and transition to the Reformation era. Upon becoming president, he liberalized Indonesia's press and political party laws, and held an early democratic election three years sooner than scheduled, which resulted in the end of his presidency. His 517-day presidency and 71-day vice presidency are the shortest in the country's history.

Indonesian names and naming customs reflect the multicultural and polyglot nature of the over 17,000 islands in the Indonesian archipelago. The world's fourth most populous nation, Indonesia is home to approximately 365 ethnic groups, each with their own culture, customs, and language. The state officially recognises more than 300 of these ethnic groups. The Javanese are the largest single group, comprising around 40 percent of Indonesia's population. 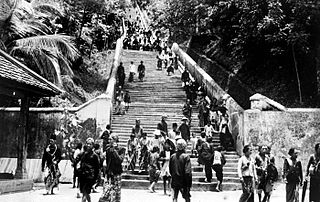 Imogiri is a royal graveyard complex in Yogyakarta, in south-central Java, Indonesia, as well as a subdistrict under the administration of Bantul Regency. Imogiri is a traditional resting place for the royalty of central Java, including many rulers of the Sultanate of Mataram and of the current houses of Surakarta and Yogyakarta Sultanate. The name Imagiri is derived from Sanskrit Himagiri, which means 'mountain of snow'. The latter is another name for Himalaya. 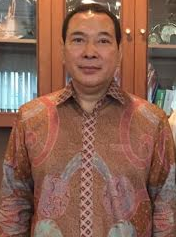 Hutomo Mandala Putra, commonly known as Tommy Suharto, is a convicted murderer, an Indonesian businessman, politician and the youngest son of Suharto, the second President of Indonesia. He has long had a reputation for being a playboy and gained notoriety for commissioning the murder of a judge who convicted him of corruption. He is currently the chairman of Berkarya Party.

Puncak or Puncak Pass is a mountain pass in West Java, Indonesia. The area is a common weekend destination for residents of Jakarta, including for those who are longing for clean air and natural scenery.

Opak River is a river in central south area of Java island, Indonesia.

Tommy Sugiarto is an Indonesian badminton player who is a singles specialist. He was the bronze medalist at the 2014 World Championships. Sugiarto competed at the 2014 Asian Games and 2016 Summer Olympics.

Paulo Oktavianus Sitanggang is an Indonesian professional footballer who plays as a central midfielder for Liga 2 club PSMS Medan.

Hansamu Yama Pranata is an Indonesian professional footballer who plays as a centre-back for Persebaya Surabaya and the Indonesia national team.

Dede Rosyada is a Muslim academic and intellectual from Indonesia. He has been rector of UIN Syarif Hidayatullah Jakarta since 2015. 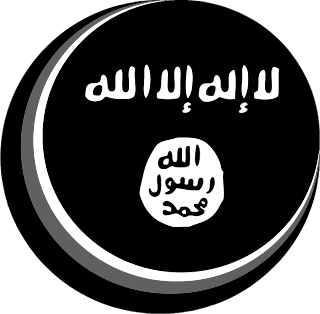 The East Indonesia Mujahideen is a terrorist group operating out of Poso, Sulawesi in Indonesia. The group was led by Abu Wardah until he was killed by Indonesian police on 18 July 2016. The group has pledged allegiance to the Islamic State of Iraq and the Levant. 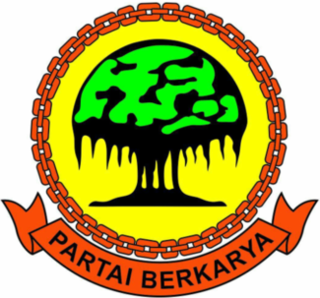 The Berkarya Party is an Indonesian political party formed in 2016. The party was formed to channel the political aspirations of former president Suharto's youngest son, Hutomo Mandala Putra, better known as Tommy Suharto. Tommy, a convicted murderer by proxy, lost the general chairmanship of the party in July 2020 after the government recognized the leadership of a breakaway faction headed by former general Muchdi Purwopranjono. Berkarya came 11th out of 16 political parties that contested Indonesia's 2019 general election, receiving 2.09% of votes cast. The party supported Tommy's former brother-in-law Prabowo Subianto's unsuccessful bid for the presidency in 2019. After failing to win a 4% threshold necessary to gain seats in the national parliament, the party in 2020 split into rival factions: one led by Tommy and the government-recognized faction led by Muchdi.

Subur Budhisantoso is an Indonesian politician and professor. He was one the first leaders of the Democratic Party of Indonesia from 2001 to 2005.

Romi Herton was an Indonesian politician and businessman who served as the mayor of Palembang. He served actively between 2013 and 2014, and remained formally a mayor until 2015 when he was removed from his post. Before becoming mayor, he had been the deputy mayor for five years.

PT Timor Putra Nasional (TPN), commonly known as Timor was an Indonesian automobile manufacturer operating between 1996 and 2000 originally formed by businessman Tommy Suharto. The company was created as a response to a presidential instruction regarding the development of the national car industry. The Indonesian government then appointed TPN as a sole 'national car pioneer'.