Tomoe Gozen is a novel by Jessica Amanda Salmonson, published in 1981. Set in an alternate universe resembling feudal Japan, the book combines the tale of historical female samurai Tomoe Gozen with the legends and creatures of Japanese mythology to create an action-adventure fantasy. It is the first part of the Tomoe Gozen Trilogy which met with some success in the 1980s fantasy novel market. The series is notable for its unusual, highly researched samurai background and feminist story slant.

A revised version of the novel re-titled The Disfavored Hero was published in 1999.

Tomoe Gozen, a warrior of incredible skill, is the vassal of warlord Shojiro Shigeno. In the process of defeating Shigeno's enemy, the Chinese monk Huan, Tomoe is nearly killed. Huan resurrects her on the condition that she turn against her former master, and after committing a series of evil deeds under Huan's power, Tomoe manages to free herself and becomes ronin, or masterless samurai. The story mostly traces Tomoe's attempts to regain her honour, leading her into conflict with enemies, friends and the samurai culture that created her.

Sword and sorcery (S&S) is a subgenre of fantasy characterized by sword-wielding heroes engaged in exciting and violent adventures. An element of romance is often present, as is an element of magic and the supernatural. Unlike works of high fantasy, the tales, though dramatic, focus mainly on personal battles rather than world-endangering matters. Sword and sorcery commonly overlaps with heroic fantasy. 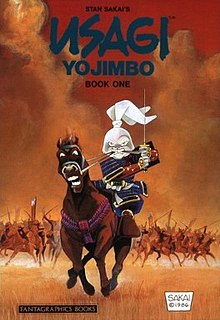 Usagi Yojimbo is a comic book series created by Stan Sakai. It is set primarily at the beginning of the Edo period of Japanese history and features anthropomorphic animals replacing humans. The main character is a rabbit rōnin, Miyamoto Usagi, whom Sakai based partially on the famous swordsman Miyamoto Musashi. Usagi wanders the land on a musha shugyō, occasionally selling his services as a bodyguard.

Tomoe Gozen was a late twelfth-century samurai warrior (onna-bugeisha), known for her bravery. She served Minamoto no Yoshinaka in the Genpei War shogunate in Japan. Her family had strong affiliations with Yoshinaka. Her father, Nakahara Kanetō was a strong supporter of Yoshinaka and also his foster father, who raised him since he was two. Her mother was Yoshinaka's wet nurse. Two of her elder brothers also served Yoshinaka as generals. She is best known for her loyalty and courage at the Battle of Awazu in 1184.

Lady Hangaku was a female warrior samurai, one of the relatively few Japanese warrior women commonly known in history or classical literature.

Charles R. Saunders also credited as Charles Saunders is an African-American author and journalist currently living in Canada. During his long career, he has written everything from novels both fiction and non-fiction, to screenplays and radio plays.

Onna-bugeisha was a type of female warrior belonging to the Japanese nobility. These women engaged in battle alongside samurai men mostly in times of need. They were members of the bushi (samurai) class in feudal Japan and were trained in the use of weapons to protect their household, family, and honour in times of war. Significant icons such as Tomoe Gozen, Nakano Takeko, Empress Jingū and Hōjō Masako are famous examples of onna-bugeisha.

The Ealdwood Stories, also known as the Arafel Stories, are a collection of fantasy works by American writer C. J. Cherryh. The books are works of high fantasy based in part on Celtic mythology. Arafel, a main character, is a Daoine Sidhe, the highest of the Sidhe faery-folk. She dwells in the magical small forest of Ealdwood, from which the tales take their name. 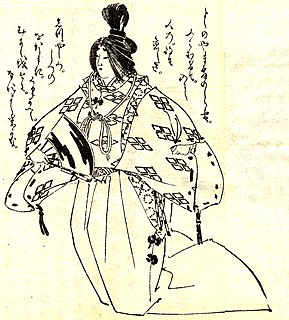 Shizuka Gozen (静御前) (1165–1211), or Lady Shizuka, one of the most famous women in Japanese history and literature, was a shirabyōshi of the 12th century, and a mistress of Minamoto no Yoshitsune. Since she, like many others, are featured largely in the Heike Monogatari, Gikeiki, and a number of plays of various traditions, her story is quite well known, but it is difficult to separate fact from fiction within it.

Jessica Amanda Salmonson is an American author and editor of fantasy and horror fiction and poetry. 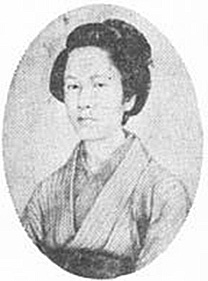 Nakano Takeko was a Japanese female warrior of the Aizu Domain, who fought and died during the Boshin War. During the Battle of Aizu, she fought with a naginata and was the leader of an ad hoc corps of female combatants who fought in the battle independently.

Young Samurai is a series of martial arts/action-adventure stories written by Chris Bradford, set in 17th century Japan, following the exploits of an English boy, Jack Fletcher, as he strives to be the first gaijin samurai.

Amazons! is an anthology of fantasy stories, edited by Jessica Amanda Salmonson, with a cover and frontispiece by Michael Whelan. It was first published in paperback by DAW Books in December 1979, and was the first significant fantasy anthology of works featuring female protagonists by (mostly) female authors. It received the 1980 World Fantasy Award for Best Anthology.

Amazons II is an anthology of fantasy stories, edited by Jessica Amanda Salmonson, with a cover by Michael Whelan. Following up her earlier anthology Amazons!, it consists, like its predecessor volume, of works featuring female protagonists by (mostly) female authors. It was first published in paperback by DAW Books in June 1982.

Young Samurai: The Way of the Sword is a children's historical novel by Chris Bradford, published in 2009. It is the second in a series of action-adventure stories set in 17th century Japan following the exploits of an English boy, Jack Fletcher, as he strives to be the first gaijin samurai.

Heroic Visions is an anthology of fantasy stories, edited by Jessica Amanda Salmonson. It was first published in paperback by Ace Books in March 1983.

Heroic Visions is an anthology of fantasy stories, edited by Jessica Amanda Salmonson. It was first published in paperback by Ace Books in July 1986.

Uchida Ieyoshi was a samurai warrior of the Kiso Minamoto clan who was most famous for dying at the hands of Tomoe Gozen, the famous female samurai, whom he failed to capture in battle at the Battle of Awazu.

The Krom Klone were the all-female bodyguard of the King of Siam. They were established in 1688 and were a well-disciplined force, responsible for the security of the royal family and the maintenance of order within the palace grounds.