Tonga Development Bank (TDB) is a development finance institution that promotes Tonga's economic and social advancement through a variety of banking services.

Tonga Development Bank’s Micro Lending Product and facilities are aimed at advancing the development of key economic sectors in the country, especially small-scale farming and handicraft-making that involves women and youth groups. This product aims to promote small business initiatives and savings at villages especially people who have skills but have less or no collateral at all to pledge as loan security. [1]

This ADFIAP Award 2010 given to Tonga Development Bank recognizes its efforts in successfully advancing economic and social development through innovative financing schemes that benefit poor and disadvantaged groups in the country. [1]

Microcredit is the extension of very small loans (microloans) to impoverished borrowers who typically lack collateral, steady employment, or a verifiable credit history. It is designed to support entrepreneurship and alleviate poverty. Many recipients are illiterate, and therefore unable to complete paperwork required to get conventional loans. As of 2009 an estimated 74 million people held microloans that totaled US$38 billion. Grameen Bank reports that repayment success rates are between 95 and 98 percent. 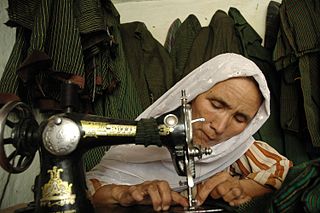 Grameen Bank is a microfinance organisation and community development bank founded in Bangladesh. It makes small loans to the impoverished without requiring collateral.

A financial intermediary is an institution or individual that serves as a middleman among diverse parties in order to facilitate financial transactions. Common types include commercial banks, investment banks, stockbrokers, pooled investment funds, and stock exchanges. Financial intermediaries reallocate otherwise uninvested capital to productive enterprises through a variety of debt, equity, or hybrid stakeholding structures.

Aga Khan Agency for Microfinance (AKAM) is a microfinancing agency of the Aga Khan Development Network.

The non-governmental organisation based in Bangladesh which provides microcredit financing.

Micro financing in Tanzania started in 1995 with SACCOS and NGOs. It has since then contributed to the increasing success of international micro financing. Microfinance stills remains a relatively new in Tanzania since it has not penetrated yet. Since 1995, microfinance has been linked to poverty alleviation programs and women. The government made efforts to ensure commercial banks have continued to provide financial support to the small entrepreneurial business. However a microfinance National Policy was implemented in 2002 to encourage and support microfinances in the country. Since the implementation, micro financing was officially launched and recognized as a poverty alleviation tool. Due to its increase exposure and use in the nation, commercial banks have developed interests in to offer microfinance. There are various microfinance banks that functions as supporting institutions in the country that usually provide microfinance services. These may include the CRDB, National Microfinance Bank, and AKIBA. However there are also other few banks that are concerned with micro financing in Tanzania such as the PRIDE and SEDA, Tanzania Postal Bank and FINCA. Community and small banks have also expressed interest in the same including the NGOs and other non-profit organizations.

Village banking is a microcredit methodology whereby financial services are administered locally rather than centralized in a formal bank. Village banking has its roots in ancient cultures and was most recently adopted for use by micro-finance institutions (MFIs) as a way to control costs. Early MFI village banking methods were innovated by Grameen Bank and then later developed by groups such as FINCA International founder John Hatch. Among US-based non-profit agencies there are at least 31 microfinance institutions (MFIs) that have collectively created over 800 village banking programs in at least 90 countries. And in many of these countries there are host-country MFIs—sometimes dozens—that are village banking practitioners as well.

A SELF-HELP GROUP (SHG) is a financial intermediary committee usually composed of 10 to 25 local women between 18 to 40 years. Most self-help groups are in India, though SHGs can be found in other countries, especially in South Asia and Southeast Asia. SHGs is nothing but a group of people who are on daily wages, they form a group and from that group one person collects the money and gives the money to the person who is in need.

Grameen America is a 501(c)(3) nonprofit microfinance organization based in New York City. It was founded by Nobel Peace Prize recipient Muhammad Yunus in 2008. Grameen America is run by former Avon Chairman and CEO Andrea Jung. The organization provides loans, savings programs, financial education, and credit establishment to women who live in poverty in the United States. All loans must be used to build small businesses.

Women's World Banking is a nonprofit organization that provides strategic support, technical assistance and information to a global network of 55 independent microfinance institutions (MFIs) and banks that offer credit and other financial services to low-income entrepreneurs in the developing world, with a particular focus on women. The Women's World Banking network serves 24 million micro-entrepreneurs in 32 countries worldwide, of which 80 percent are women. It is the largest global network of microfinance institutions and banks in terms of number of clients, and the only one that explicitly designates poor women as the focus of its mission.

Angkor Mikroheranhvatho (Kampuchea) Co., also known as AMK, is a registered microfinance institution (MFI) headquartered in Phnom Penh, Cambodia with over 280,000 active borrowers. AMK is the largest provider of credit in Cambodia in terms of borrower numbers and has branches in 23 provinces and Phnom Penh city. It has over 10,000 active savers and over 1,000 employees. AMK provides several microfinance services, including microcredit, microsavings, and mobile money transfers.

Community banking is a non-traditional form of money-lending. Unlike banks or other classic lending institutions, the funds that community banks lend to borrowers are gathered by the local community itself. This tends to mean that the individuals in a neighborhood or group have more control over who is receiving the capital and how that capital is being spent. This practice has existed in some form for centuries; in ancient Egypt, for example, when grain was often used as currency, local granaries would store and distribute the community’s food supply. Since that time, a variety of community banking models have evolved.

Small finance banks are a type of niche banks in India. Banks with a small finance bank license can provide basic banking service of acceptance of deposits and lending. The aim behind these to provide financial inclusion to sections of the economy not being served by other banks, such as small business units, small and marginal farmers, micro and small industries and unorganised sector entities.

Microfinance in Kenya consists of microfinance facilities and regulations in Kenya which has been developing since the mid 1990s. Legislation was passed in 2006 with the Micro Finance Act which became active in 2008. By 2010 there were 24 large micro finance institutions in Kenya, which provided US $1.5 billion to approximately 1.5 million active borrowers. With over 100,000 clients, Equity Bank Kenya had the largest share of business loans representing market share of 73.50% followed by Kenya Women Microfinance Bank with 12.06%. Most microfinance firms as in other countries have eligibility criteria which may include gender, age, a valid Kenyan ID, a business, an ability to repay the loan and be a customer of the institution.

Kashf Foundation is a non-profit organization, founded by Roshaneh Zafar in 1996. Kashf is regarded as the first microfinance institution (MFI) of Pakistan that uses village banking methodology in microcredit to alleviate poverty by providing affordable financial and non-financial services to low income households - particularly for women, to build their capacity and enhance their economic role. With headquarters in Lahore, Punjab, Kashf has regional offices in five major cities and over 200 branches across the Pakistan.

The Uganda Microfinance Regulatory Authority (UMRA), is a government agency responsible for the licensing, supervision and regulation of Tier-4 micro finance institutions, money lenders, savings cooperatives and any money-lending institution with capital of less that USh500 million (US$140,000). Tier-4 institutions are those that do not accept financial deposits and are not under the supervision of the Bank of Uganda, the central bank and national banking regulator.