Tongue River Cave is a cave in the Bighorn National Forest just west of Dayton, Wyoming. [1] Historically notable for a wide variety of rare cave formations and animal species, the cave has suffered in recent decades from unrestricted traffic, vandalism, and the theft of many of the cave's speleothems. Deemed beyond preservation, the cave is now managed by the U.S. Forest Service as a "sacrifice cave". [2]

The Big Horn National Forest closed the cave to the public in July, 2010 to prevent the spread of White nose syndrome, however the cave has since been reopened. Registration and decontamination of clothing and gear is now required to visit the cave per Forest Order. [3]

Tongue River Cave is in the Bighorn dolomite. Mapped in 1969 by the National Speleological Society, Tongue River Cave contains 1.23 miles of passages. [4] The cave is 106 feet deep. [5] The cave is composed primarily of two separate river channels, one abandoned and the other active. The active stream passage is an underground portion of the Little Tongue River which resurges farther east down the Tongue River Canyon. [6] The active and abandoned river channels intersect approximately 1/2 mile into the cave in a large chamber known as the Boulder Room. The upper channel is mostly dry and sandy, ending in a sand-filled chamber. The lower, active stream passage begins in a sump and ends in a narrow fissure. Attempts have been made to explore the cave's underwater portion, but low water temperatures and the difficulty of hauling adequate scuba equipment through tight passages have hampered the success of such efforts.

In October 1974, fluorescent dye injected into surface waters of the Little Tongue River 2.6 miles to the south of the cave appeared inside the cave's river, verifying speculation that The Little Tongue River is the source of the cave's stream passage. [7] Waterfalls exist in places of rapid erosion and softer stone within Tongue River Cave, including a 24 foot drop at the cave's Big Falls. Surface rain and snowmelt contribute to the river's level inside the cave, with rapid increases in water level possible even days after the surface event which triggered the increase occurred. Flash floods in the cave are a rare occurrence.

The cave's temperature remains a constant 50 degrees Fahrenheit with near 100% humidity. Approximately 750 feet into the cave, the main passage constricts into a narrow crawl where barometric equalization of the cave's atmosphere with that of the outside generates significant winds. [8] Near the cave's entrance, condensation resulting from the meeting of the subterranean and surface air masses results in the cave's Rain Room where water droplets fall in constant succession from the chamber's ceiling.

Two species of bat inhabit Tongue River Cave, though their sighting has diminished in recent years. Townsend's Big-eared Bat (Plecotus Townsendii) and the Fringed Myotis (Myotis thysanodes) occupy the canyon, and have most likely relocated to less travelled habitats [9] A band of reclusive cave rats occupies the lower crawlways below the cave's entrance chamber.

Karst is a topography formed from the dissolution of soluble rocks such as limestone, dolomite, and gypsum. It is characterized by underground drainage systems with sinkholes and caves. It has also been documented for more weathering-resistant rocks, such as quartzite, given the right conditions. Subterranean drainage may limit surface water, with few to no rivers or lakes. However, in regions where the dissolved bedrock is covered or confined by one or more superimposed non-soluble rock strata, distinctive karst features may occur only at subsurface levels and can be totally missing above ground.

Wookey Hole Caves are a series of limestone caverns, a show cave and tourist attraction in the village of Wookey Hole on the southern edge of the Mendip Hills near Wells in Somerset, England. The River Axe flows through the cave. It is a Site of Special Scientific Interest (SSSI) for both biological and geological reasons. Wookey Hole cave is a "solutional cave", one that is formed by a process of weathering in which the natural acid in groundwater dissolves the rocks. Some water originates as rain that flows into streams on impervious rocks on the plateau before sinking at the limestone boundary into cave systems such as Swildon's Hole, Eastwater Cavern and St Cuthbert's Swallet; the rest is rain that percolates directly through the limestone. The temperature in the caves is a constant 11 °C (52 °F). 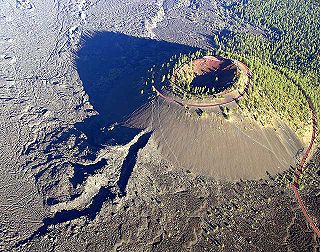 Newberry National Volcanic Monument was designated on November 5, 1990, to protect the area around the Newberry Volcano in the U.S. state of Oregon. The monument was created within the boundaries of the Deschutes National Forest, which is managed by the U.S. Forest Service, and includes 54,822 acres of lakes, lava flows, and geologic features in central Oregon. 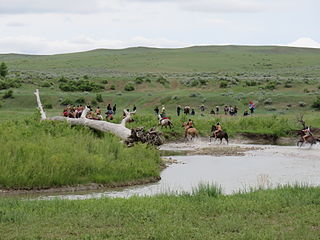 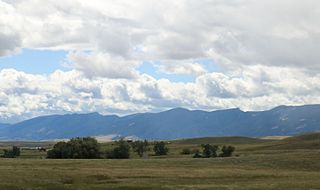 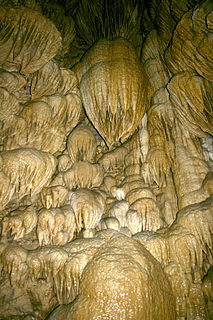 Oregon Caves National Monument and Preserve is a protected area in the northern Siskiyou Mountains of southwestern Oregon in the United States. The 4,554-acre (1,843 ha) park, including the marble cave, is 20 miles (32 km) east of Cave Junction, on Oregon Route 46. The protected area, managed by the National Park Service (NPS), is in southwestern Josephine County, near the Oregon–California border.

The gray bat is a species of microbat endemic to North America. The creature once flourished in caves all over the southeastern United States, but due to human disturbance, gray bat populations declined severely during the early and mid portion of the 20th century. 95% of gray bats now only roost in 11 caves. M. grisescens has been listed as federally endangered by the U.S. Fish and Wildlife Service since 1976, and is protected under the Endangered Species Act. Gray bat populations were estimated at approximately 2 million bats around the time they were placed on the Endangered Species list. By the early 1980s populations of gray bats dropped to 1.6 million. With conservation efforts in place, in 2004, gray bat populations were estimated to have reached 3.4 million.

The Bighorn National Forest is a U.S. National Forest located in northern Wyoming, United States and consists of over 1.1 million acres (4,500 km²). Created as a US Forest Reserve in 1897, it is one of the oldest government-protected forest lands in the U.S. The forest is well east of the continental divide and extends from the Montana border for a distance of 80 miles (130 km) along the spine of the Bighorn Mountains, an outlying mountain range separated from the rest of the Rocky Mountains by Bighorn Basin. Elevations range from 5,000 feet along the sagebrush and grass-covered lowlands at the foot of the mountains, to 13,189 feet on top of Cloud Peak, the highest point in the Bighorn Mountains. Around 99% of the land is above 1,500 metres (4,900 ft). The forest is named after the Bighorn River, which is partially fed by streams found in the forest. Streams in the range are fed primarily by snowmelt and snowmelt mixed with driving rainfall. 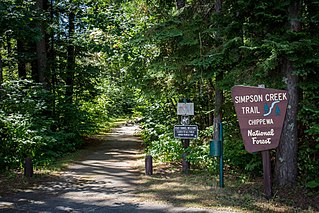 Chippewa National Forest is a National Forest located in north central Minnesota, United States, in the counties of Itasca, Cass and Beltrami. Forest headquarters are located in Cass Lake, Minnesota. There are local ranger district offices in Blackduck, Deer River and Walker. 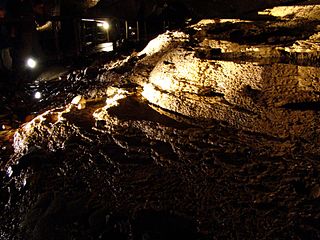 The Marble Arch Caves are a series of natural limestone caves located near the village of Florencecourt in County Fermanagh, Northern Ireland. The caves are named after the nearby Marble Arch, a natural limestone arch at the upstream end of Cladagh Glen under which the Cladagh River flows. The caves are formed from three rivers draining off the northern slopes of Cuilcagh mountain, which combine underground to form the Cladagh. On the surface, the river emerges from the largest karst resurgence in Ireland, and one of the largest in the United Kingdom. At 11.5 kilometres (7.1 mi) the Marble Arch Caves form the longest known cave system in Northern Ireland, and the karst is considered to be among the finest in the British Isles.

Gila Wilderness was designated the world's first wilderness area on June 3, 1924. Along with Aldo Leopold Wilderness and Blue Range Wilderness, the 558,014 acres (225,820 ha) wilderness is part of New Mexico's Gila National Forest. The wilderness is approximately 27 miles (43 km) from north to south and 39 miles (63 km) east to west. U.S. Wilderness Areas do not allow motorized or mechanized vehicles, including bicycles. Camping, hunting, and fishing are allowed with proper permit, but no roads, buildings, logging, or mining are permitted. Wilderness areas within National Forests and Bureau of Land Management areas allow hunting in season.

The Caves of the Tullybrack and Belmore hills can be found in south-west County Fermanagh, Northern Ireland. The region is also described as the West Fermanagh Scarplands by environmental agencies and shares many similar karst features with the nearby Marble Arch Caves Global Geopark.

There are at least 50 small mammal species known to occur in Yellowstone National Park.

The Alcathoe bat is a European bat in the genus Myotis.. Known only from Greece and Hungary when it was first described in 2001, its known distribution has since expanded to Spain, England, Sweden, and Azerbaijan, among other countries. It is similar to the whiskered bat and other species and is difficult to distinguish from them. However, its brown fur is distinctive and it is clearly different in characters of its karyotype and DNA sequences. Although some genetic data suggest that it is related to Geoffroy's bat, other analyses do not support a close relationship between M. alcathoe and any other species.

The Nidderdale Caves are a series of caves in Upper Nidderdale in North Yorkshire, England. There are two cave systems and most of the caves are in some way linked with one or the other. The smaller system is the Eglin cave system in the valley of How Stean Beck, a tributary of the River Nidd, associated with How Stean Gorge. The larger system is the Goyden cave system under the valley of the River Nidd, which flows east from Scar House Reservoir, then south, and shortly after disappears underground down several sink holes to reappear at the rising just beyond the village of Lofthouse. Cavers are able to access several sections of this system via the different entrances.

The southern myotis, also known as large-footed myotis, is a species of vesper bat (Vespertilionidae) in genus Myotis. The southern myotis is one of only two Australian "fishing" bats and feeds by trawling its specially adapted feet along the water's surface for aquatic invertebrates and fish.

There are a number of terms that are used in connection with caves, caving and speleology. The following is an incomplete list.