Carr is a member of the Naptown Roller Girls, [2] a roller derby team based in Indianapolis, Indiana. In August 2008, Carr wrote a book titled Knockdown Knits, [3] that combined roller derby and knitting. In February 2012, Carr published Knits for Nerds, a knitting book for fans of science fiction, fantasy, and other geeky things. In 2014 her third book, Geek Knits was released through St. Martins Press. [4] She was formerly a bass player in the indie rock group Chuck Marten.[ citation needed ]

She is married to Dan Carr, an announcer for the Naptown Roller Girls as well as Demolition City Roller Derby in Evansville, IN. [5] [ citation needed ] 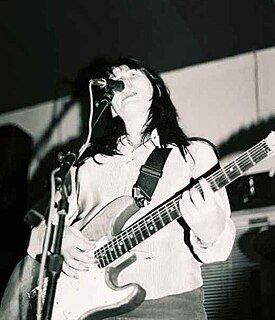 Kelley Deal is an American musician and singer. She has been lead guitarist and co-vocalist of the alternative rock band The Breeders since 1992, and has formed her own side-projects with bands such as R. Ring and The Kelley Deal 6000. She is the identical twin sister of The Breeders' lead singer Kim Deal.

Lezlie Deane is an American singer, musician, roller derby athlete, and actress who has starred in film, made television appearances and has toured the world as a rock musician. She was once best known for her roles in horror films including 976-EVIL, Girlfriend from Hell (1989), and the horror movie Freddy's Dead: The Final Nightmare (1991) in the role of Tracy, and also her association with the Dance-Pop band, Fem2Fem; however, her current band Scary Cherry and the Bang Bangs has created quite a buzz in the Glam Punk, #Glitterpunk, Glitter Rock Revival and Rock world where they have achieved cult status as well as winning an Independent Music Award for best rock song "Don't Wanna".

Roller Games was the name of a sports entertainment spectacle created in the early 1960s in Los Angeles, California as a rival to the Jerry Seltzer-owned Roller Derby league, which had enjoyed a monopoly on the sport of roller derby — and its name — since its inception in 1935. Roller Games provided a mostly televised, increasingly theatrical version of the sport. Roller Games and its flagship team, the Los Angeles Thunderbirds (T-Birds) has endured several boom and bust cycles, including a roller derby attendance record in 1972, a major reorganization in 1975, appearances on ESPN in 1986, a TV series called RollerGames in 1989–1990, and a small number of untelevised exhibition matches in 1987, 1988, 1990, 1993, and the early and mid-2000s.

Knitty.com is an online knitting magazine based in Toronto and published quarterly since fall 2002.

A sweater vest is an item of knitwear that is similar to a sweater, but without sleeves, usually with a low-cut neckline. They were popular in the 20th century, particularly in the 1970s in the UK, and are again growing in popularity in this century.

I Knit London is a knitting organisation based in London, England, UK, comprising a knitting group, knitting shop and knitting events. I Knit London was formed in December 2005, and is run, by Gerard Allt and Craig Carruthers.

Ohio Roller Derby (OHRD) is a women's flat track roller derby league based in Columbus, Ohio. Founded in 2005, the league currently consists of two mixed teams which compete against teams from other leagues. Ohio Roller Derby is a founding member of the Women's Flat Track Derby Association (WFTDA).

Madison Roller Derby (MRD), founded as "Mad Rollin' Dolls", is a women's flat-track roller derby league based in Madison, Wisconsin. Founded in 2004, Madison is a founding member of the Women's Flat Track Derby Association (WFTDA), and was the fourth league to join the fledgling organization. Since 2006, Madison has qualified for the WFTDA post-season every year, including three appearances at WFTDA Championships. 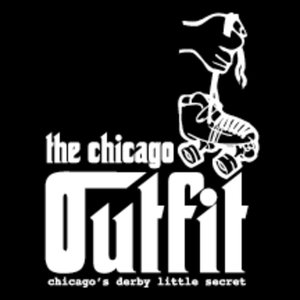 Chicago Outfit Roller Derby is a women's flat-track roller derby league based in Chicago, Illinois. Founded in 2007, the Chicago Outfit is a member of the Women's Flat Track Derby Association (WFTDA).

The Old School Derby Association (OSDA) was an association of roller derby leagues in the United States. 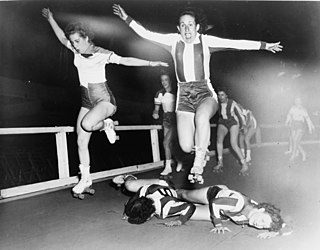 The growing popularity of roller skating in the United States led to the formation of organized multi-day endurance races for cash prizes as early as the mid-1880s. Speed and endurance races continued to be held on both flat and banked tracks in the century's first three decades and spectators enjoyed the spills and falls of the skaters. The term "roller derby" was used to refer to such races by 1922.

The Derby City Roller Girls (DCRG) is a women's flat track roller derby league based in Louisville, Kentucky. Founded in 2007, the league currently consists of two teams, which compete against teams from other leagues. Derby City is a member of the Women's Flat Track Derby Association (WFTDA).

SoCal Derby is a women's flat track roller derby league in San Diego, California. The league has two teams which play teams from other leagues, and is a member of the Women's Flat Track Derby Association (WFTDA).

Chloé Seyrès is an all-rounder in the field of rollerskating, a multiple world champion in inline freestyle slalom and a member of the French Team of roller derby, where she is known as Kozmic Bruise #B612.