Peter Schreier was a German tenor in opera, concert and lied, and a conductor. He was regarded as one of the leading lyric tenors of the 20th century. 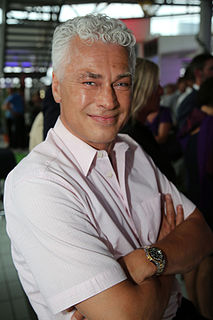 Franck Henry Pierre Ribéry is a French professional footballer who plays for Serie A club Fiorentina. He primarily plays as a winger, preferably on the left side although being right-footed, and is known for pace, energy, skill and precise passing. Ribéry is described as a player who is fast, tricky and an excellent dribbler, who has great control with the ball at his feet. Since joining Bayern, he has been recognised on the world stage as one of the best French players of his generation. The previous talisman of the French national team, Zinedine Zidane, once referred to Ribéry as the "jewel of French football". 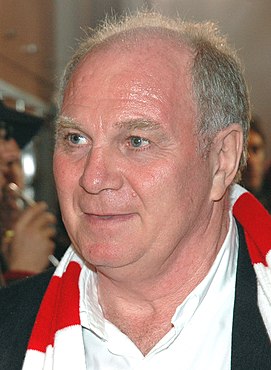 Ulrich "Uli" Hoeneß, is the former president of German football club Bayern Munich and a retired footballer for West Germany who played as a forward for club and country. Hoeneß represented Germany at one World Cup and two European Championships, winning one tournament in each competition.

Antônio da Silva is a Brazilian former footballer who played as a midfielder. 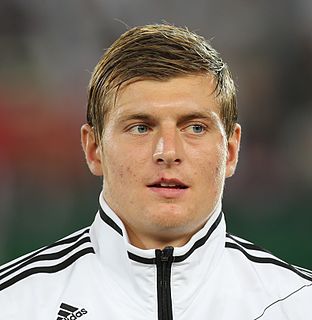 Toni Kroos is a German professional footballer who plays for Spanish club Real Madrid and the German national team. Kroos plays mainly as a central midfielder, but is also used as a defensive midfielder or deep-lying playmaker. He is known for his vision, creativity, passing, and set-piece ability, and is widely considered to be one of the best midfielders in the world.

Christian Schreier is a former German footballer who is currently general manager of SC Paderborn. He played as an attacking midfielder, most notably with VfL Bochum and Bayer 04 Leverkusen, and won one cap for West Germany, in 1984. His biggest successes came in 1988, when he won the UEFA Cup and an Olympic bronze Medal. 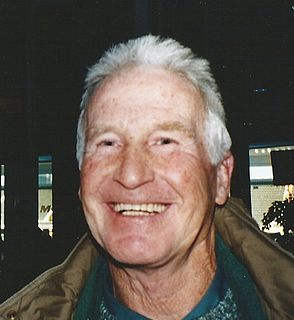 Anton "Toni" Allemann was a Swiss footballer. He began his career at BSC Young Boys in Berne in 1957 at age 21, where he spent four seasons. Allemann came to London in 1959 as part of his training as a watchmaker. FA regulations meant that he could not play for a professional club so he joined Hayes FC making a total of 15 appearances and scoring 4 goals. In 1961, he joined Italian side A.C. Mantova, and later played for PSV Eindhoven in the Netherlands, and 1. FC Nürnberg in Germany, before returning home to Switzerland in 1966 to play for Grasshopper-Club Zürich. 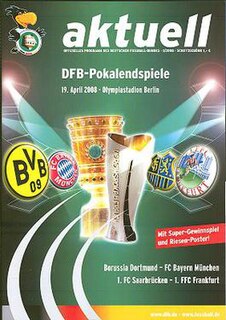 The 2008 DFB-Pokal Final decided the winner of the 2007–08 DFB-Pokal, the 65th season of Germany's premier knockout football cup competition. The match took place on 19 April 19, 2008 between thirteen-time winners Bayern München and two-time winners Borussia Dortmund. The final was played in front of 70,000 at Berlin's Olympiastadion. Bayern ran out 2–1 winners in extra time, thanks to two strikes from Italian forward Luca Toni, gaining their 14th DFB-Pokal title and gaining the first trophy of a league and cup double.

Toni Micevski is afootball midfielder from North Macedonia. Despite his age he is still active by playing for FK Poeševo in the Macedonian fourth league group Bitola together with another well known veteran in Goran Stavrevski.

On 29 April 1978, the final match day of the 1977–78 Fußball-Bundesliga season, Borussia Mönchengladbach played Borussia Dortmund with the possibility of winning the Bundesliga championship. Knowing that if 1. FC Köln won their game away to FC St. Pauli, Borussia Mönchengladbach would have to win by a margin well in excess of ten goals. The match finished 12–0, which remains the largest margin of victory and tied with four other matches for the biggest win in Bundesliga history. However, 1. FC Köln beat FC St. Pauli 5–0 to become champions.

Anton Burghardt is a former German football player and manager.

Toni Andreas Leistner is a German footballer who plays as a defender for Bundesliga side 1. FC Köln, on loan from Championship club Queens Park Rangers.

The 1995–96 Bayern Munich season was their 95th season of existence and 31st Bundesliga season.

Toni Lindenhahn is a German footballer who plays as an attacking midfielder for Hallescher FC. He came through the club's youth system. He was promoted to the first team in 2009 and was a key part of the team that earned promotion to the 3. Liga in 2012. He played in the club's first game at this level, a 1–0 win over Kickers Offenbach.

Toni Vastić is an Austrian football forward who plays currently for VfR Aalen.