Tony Benjamin (born October 27, 1955 in Monessen, Pennsylvania) is a former professional American football player who played in three NFL seasons from 1977-1979 for the Seattle Seahawks. 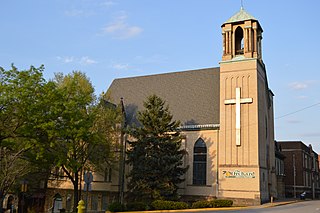 Monessen is a city in Westmoreland County, Pennsylvania, United States. The population was 7,720 at the 2010 census. In 1940, 20,257 people lived there. In 1990 the population was 13,026. Monessen is the most southwestern municipality of Westmoreland County. Steel-making was a prominent industry in Monessen, which was a Rust Belt borough in the "Mon Valley" of southwestern Pennsylvania that became a third-class city in 1921. Monessen is part of the Pittsburgh metropolitan area, the Rivers of Steel National Heritage Area, as well as the Laurel Highlands.