Tony Bobbitt played alongside National Basketball Association (NBA) player Vince Carter at Daytona Beach Mainland High School, where he graduated in 1999. Bobbitt also graduated from University of Cincinnati, having previously played for the College of Southern Idaho (NJCAA) from 2000 to 2002. He was signed as an undrafted free agent by the Los Angeles Lakers in January 2005, playing 2 games for them during the 2004–05 NBA season. 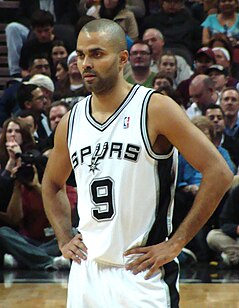 Brent Robert Barry, commonly known by the nickname Bones, is an American basketball executive, broadcaster and former player. He is the current vice president of basketball operations for the San Antonio Spurs. The 6 ft 7 in (2.01 m), 210 lb shooting guard played professionally in the National Basketball Association, winning two championships with the Spurs, and also won the 1996 NBA Slam Dunk Contest. He is the son of former NBA player Rick Barry.

The Oklahoma Storm was a United States Basketball League (USBL) team in Enid, Oklahoma. Founded by sports agent and attorney James Sears Bryant, the Storm successfully captured the USBL championship under head coach Kareem Abdul-Jabbar in 2002, defeating Kansas with a final score of 122–109. The team played its home games at Mark Price Arena and the Chisholm Trail Expo Center. The Oklahoma Storm disbanded following the 2007 season when the USBL dissolved.

Tyrone Curtis "Muggsy" Bogues is an American former basketball player. The shortest player ever to play in the National Basketball Association, the 5 ft 3 in (1.60 m) Bogues played point guard for four teams during his 14-season career in the NBA. Although best known for his ten seasons with the Charlotte Hornets, Bogues also played for the Washington Bullets, Golden State Warriors, and Toronto Raptors. After his NBA career, he served as head coach of the now-defunct Charlotte Sting of the WNBA.

The Bill Russell NBA Finals Most Valuable Player Award is an annual National Basketball Association (NBA) award given since the 1969 NBA Finals. The award is decided by a panel of eleven media members, who cast votes after the conclusion of the Finals. The person with the highest number of votes wins the award. The award was originally a black trophy with a gold basketball-shaped sphere at the top, similar to the Larry O'Brien Trophy, until a new trophy was introduced in 2005 to commemorate Bill Russell. 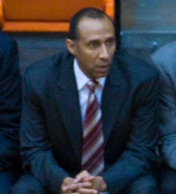 Alan Lybrooks Henderson is an American former professional basketball player of the NBA. He stands 6'9" tall. Born in Morgantown, West Virginia, Henderson attended Brebeuf Jesuit Preparatory School in Indianapolis, Indiana. They lost the state championship game his senior year to Glenn Robinson's Gary Roosevelt squad. In 1994, he was a part of the US men's basketball team for the Goodwill Games.

The NBA high school draftees are players who have been drafted to the National Basketball Association (NBA) straight out of high school without playing basketball at the collegiate level. The process of jumping directly from high school to the professional level is also known as going prep-to-pro. Since 2006, the practice of drafting high school players has been prohibited by the new collective bargaining agreement, which requires that players who entered the draft be 19 years of age and at least one year removed from high school. Contrary to popular belief, the player does not have to play at least a year in college basketball: the player can choose to instead play in another professional league like Brandon Jennings or Emmanuel Mudiay in Italy and China respectively; simply take the year off, as Mitchell Robinson and Darius Bazley did; or even hold themselves back a year in high school before declaring for the draft, like with Satnam Singh Bhamara or Thon Maker.

The 1971 NBA draft was the 25th annual draft of the National Basketball Association (NBA). The draft was held on March 29 and 30, 1971 before the 1971–72 season. In this draft, 17 NBA teams took turns selecting amateur U.S. college basketball players and other eligible players, including international players. A player who had finished his four-year college eligibility was eligible for selection. If a player left college early, he would not be eligible for selection until his college class graduated. The first two picks in the draft belonged to the teams that finished last in each conference, with the order determined by a coin flip. The Cleveland Cavaliers won the coin flip and were awarded the first overall pick, while the Portland Trail Blazers were awarded the second pick. The remaining first-round picks and the subsequent rounds were assigned to teams in reverse order of their win–loss record in the previous season. Prior to the start of the season, the San Diego Rockets and the San Francisco Warriors relocated to Houston, Texas, and Oakland, California, and became the Houston Rockets and Golden State Warriors respectively. The draft consisted of 19 rounds comprising the selection of 237 players. The league also hosted a supplemental hardship draft on September 20, 1971, for college underclassmen who wished to join the league.

The 1962 NBA draft was the 16th annual draft of the National Basketball Association (NBA). The draft was held on March 26, 1962, before the 1962–63 season. In this draft, nine NBA teams took turns selecting amateur U.S. college basketball players. A player who had finished his four-year college eligibility was eligible for selection. If a player left college early, he would not be eligible for selection until his college class graduated. In each round, the teams selected in reverse order of their won–loss record in the previous season. Before the draft, a team could forfeit its first-round draft pick, then select any player from within a 50-mile radius of its home arena as their territorial pick. The Chicago Packers, who finished last in the previous season, were renamed the Chicago Zephyrs. The Philadelphia Warriors relocated to San Francisco and became the San Francisco Warriors prior to the start of the season. The draft consisted of 16 rounds, comprising 102 players selected. 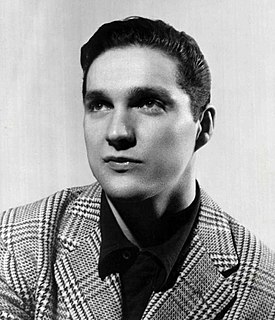 Anthony Lavelli, Jr. was an American professional basketball player and musician. He averaged 6.9 points per game during his two-year National Basketball Association (NBA) career (1949–1951) while also providing half-time entertainment with his accordion performances.

Antonio Ray Dawson is a retired American professional basketball player. At a height of 6'7" tall, and a weight of 210 lb. (95 kg), he played at the small forward position.

Tony F. White is a retired American professional basketball player. He was a 6'2" (188 cm) 170 lb (77 kg) guard. He played for three teams in the NBA before pursuing a career in Europe. Born in Charlotte, North Carolina White played for Independence High School of his hometown, before enrolling to Tennessee to play college basketball.

Shannon Denise Bobbitt is an American professional basketball player, most recently for the WNBA's Washington Mystics. One of eight children and a native of the Bronx, New York Bobbitt honed her basketball skills on the neighborhood project courts of Harlem. Following a stellar college career in which 5'2" Bobbitt won two Division I national titles at University of Tennessee she decided to enter the WNBA and began her professional basketball career playing point guard for the Los Angeles Sparks.

Anthony Price is a former professional basketball player who played in the NBA. Price attended the University of Pennsylvania where he was a standout basketball player. In his senior season, Price won the Ivy League Men's Basketball Player of the Year award after averaging 19.8 points per game and 8.7 rebounds per game. Price was then drafted with the seventh pick in the second round of the 1979 NBA Draft by the Detroit Pistons. He was waived by the Pistons before playing a single game for them. Price did end up being signed by the San Diego Clippers who he played five games for in the 1980-81 NBA season. In those five games, Price averaged 0.8 points per game and 0.6 assists per game.

Tony LeonDre Wroten Jr. is an American professional basketball player for Joventut Badalona of the Liga ACB. He played college basketball for the Washington Huskies, where he was a first-team all-conference selection in the Pac-12 before being drafted by the Memphis Grizzlies with the 25th overall pick in the 2012 NBA draft.

Tony Costner is an American former professional basketball player who was selected by the Washington Bullets in the 2nd round of the 1984 NBA Draft and played in Europe and in the Continental Basketball Association. Costner was a 6'10" Center from St. Joseph's University. He is the father of professional player Brandon Costner.