Before Chimel become a ring announcer, he and Joey Marella were the main ring technicians for the WWE. [1] Chimel then began announcing duties for the company in 1989, working mostly televised B-Shows or non-televised house shows and filling in for Howard Finkel whenever necessary, including appearances on Raw .[ citation needed ]

On Kurt Angle's final episode as SmackDown! General Manager in 2004, he demanded Chimel to come into the ring and give an apology to him; Chimel complied but then was fired by Angle. He was almost immediately re-hired by Vince McMahon.

From 2005 to 2007 Chimel was involved in a mini-feud with Mr. Kennedy, who claimed that Chimel was not announcing his name with the proper respect that it deserved. This feud included Chimel being punched, being hit in the groin, and having a doughnut shoved in his mouth by Kennedy.

On the December 22, 2006 episode of SmackDown!, he announced The Boogeyman as victorious too enthusiastically and caught his attention. The Boogeyman forced worms into his mouth as a result. Chimel ran away from the ring afterwards. This was a storyline for Chimel to take some time off to rest his nagging back injury and spend more time with his family. ECW announcer Justin Roberts was the ring announcer of SmackDown until Chimel returned on April 13, 2007.

During this time, Chimel began to gain a reputation for his announcements for Edge, who had recently dubbed himself "The Rated-R Superstar". During these announcements, Chimel's voice would frequently crack while saying the word "superstar". This would become something of a running joke on WWE television, leading to Chimel making guest appearances solely to announce Edge.

He was demoted from SmackDown when former Raw announcer Lilian Garcia returned to the WWE in December 2011. At the December 27 taping of SmackDown, NXT , & Superstars, it was revealed that Chimel would be announcing for NXT and the SmackDown portion of Superstars, replacing the departing Eden Stiles. Chimel announced for NXT until the end of the final season of its original run.

He was the ring announcer for Main Event as well as for WWE live events until June 24, 2014, and he was the ring announcer for the short-lived Saturday Morning Slam . He briefly returned to Raw on September 9, 2013, and SmackDown on September 13, 2013, to announce the returning Edge to the ring. On November 16, 2013 at a WWE live event in the United Kingdom, Chimel delivered a stunner to Curtis Axel after Axel forced Chimel to announce that Axel was still the Intercontinental Champion following Axel's win over R-Truth. Afterward, Chimel was kissed by one of the Bella Twins. [3] On the May 14, 2014 episode of Main Event, Tony was attacked by Alicia Fox during her meltdown after she lost to Emma. On the December 29 episode of Raw, Chimel returned to announce Edge and Christian. He would also announce their appearances on the December 30 episode of Main Event and the January 2, 2015 episode of SmackDown.

Chimel later took a hiatus from announcing with WWE . During the hiatus, he announced at house shows only.

Chimel once again returned to WWE television on November 15, 2016, during the 900th episode of SmackDown. At this appearance, he did his trademark introduction of Edge, before the Cutting Edge segment. Chimel returned during Beth Phoenix's induction in the 2017 WWE Hall of Fame to announce her husband Edge's name.

Chimel worked primarily behind the scenes for WWE in his last years with the company, working as a production manager and part of the ring crew. It was announced on November 9, 2020 that Chimel was released from his WWE contract on November 6, 2020 after being furloughed from the company since April 2020. [4]

Chimel named his son Joey after Joey Marella, a referee and the adopted son of Gorilla Monsoon, who was killed in an automobile accident. He was once taken out by stretcher after being superkicked by Shawn Michaels ringside during his Iron Man match against Bret Hart at WrestleMania XII in 1996. [5]

Darren Kenneth Matthews, better known by the ring name William Regal, is an English professional wrestling trainer, manager, and retired professional wrestler. He is currently signed to WWE, where he is the General Manager of the NXT and 205 Live brands. Behind the scenes, he is also WWE's Director of Talent Development and Head of Global Recruiting.

Joshua Lomberger, better known by the ring name Josh Mathews, is an American professional wrestling play by play commentator and former professional wrestler, currently signed to Impact Wrestling. He is also known for his time in WWE.

Howard Finkel was an American professional wrestling ring announcer, best known for his appearances in WWE. He began working for Vincent J. McMahon's World Wide Wrestling Federation (WWWF) in 1975, and was a Madison Square Garden ring announcer since 1977. WWE's longest-serving employee and widely regarded as the greatest ring announcer of all time, he was inducted into the WWE Hall of Fame in 2009.

Martin "Marty" Wright, better known by the ring name The Boogeyman, is an American retired professional wrestler and aerobics instructor.

Matthew Kaye is an American professional wrestler, professional wrestling commentator, actor and former high school teacher, using the ring name Matt Striker. He is signed to Impact Wrestling as a commentator, as well as providing English commentary for Lucha Libre AAA World Wide (AAA) pay-per-view (PPV) events in Mexico. He also wrestles on the United States independent circuit. He is best known for his time in WWE as both a wrestler and commentator. He is currently a part owner of The Abraham Group, which purchases and develops commercial properties. 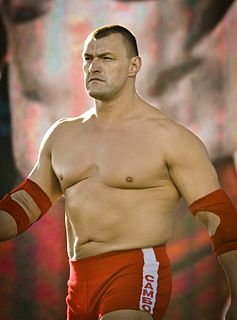 Oleg Aleksandrovich Prudius better known by his ring name Vladimir Kozlov, is a Ukrainian-American actor, martial artist, film producer and former professional wrestler. He is best known for his time in WWE, where he won the WWE Tag Team Championship once with Santino Marella. He is trained in freestyle wrestling, rugby, football, sambo, kickboxing, judo, jujutsu, Brazilian jiu-jitsu and mixed martial arts.

Maryse Mizanin is a Canadian-American professional wrestler, professional wrestling manager, actress, reality star and glamour model currently signed to WWE under the ring name Maryse. After spending years modeling, including winning Miss Hawaiian Tropic Canada in 2003, Ouellet participated in the WWE Diva Search competition and was hired by WWE in 2006. She spent time in developmental territories Ohio Valley Wrestling and Florida Championship Wrestling, before being assigned to the SmackDown brand in 2008. That year, Maryse won her first WWE Divas Championship. 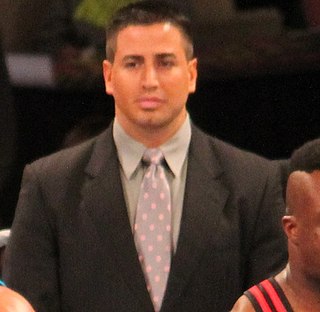 Anthony Carelli is a Canadian professional wrestler, sports analyst, web series host, trainer, former mixed martial artist and occasional actor. He most recently worked for Impact Wrestling under his real name. He is perhaps best known for his 11-year tenure with WWE where he wrestled under the ring name Santino Marella. He is the founder of Canadian martial arts and professional wrestling training facility Battle Arts Academy.

Brian Myers is an American professional wrestler and promoter signed to Impact Wrestling, where he is a former TNA World Tag Team Champion with Trevor Lee. He is best known for his time in WWE from 2006-2020, under the ring name Curt Hawkins. 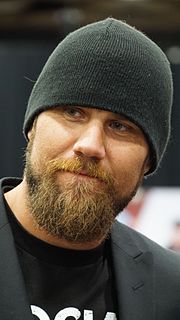 Joseph Curtis Hennig is an American professional wrestler. He is best known for his time in WWE, where he performed under the ring name Curtis Axel. 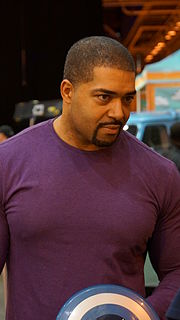 David Daniel Otunga is an American actor, lawyer, and former professional wrestler currently signed with WWE as a panelist and color commentator. He was the runner-up on the first season of NXT. He is also an original member of The Nexus and The New Nexus, being the only member present through the entire duration of the stable in every incarnation. As part of the faction, he became a two-time WWE Tag Team Champion, having one reign each with fellow Nexus members John Cena and Michael McGillicutty.

Sarona Moana-Marie Reiher Snuka-Polamalu is an American professional wrestler and actress currently signed to WWE and performing on the SmackDown brand under the ring name Tamina. She is a former WWE 24/7 Champion. A second generation professional wrestler, she is the daughter of the Hall of Famer Jimmy Snuka.

Charles Betts is an American professional wrestler and former amateur wrestler. He is currently signed to WWE, where he performs on the SmackDown brand under the ring name Chad Gable.

The 2017 WWE Superstar Shake-up was the eleventh WWE draft – and the first to be rebranded as the Superstar Shake-up – produced by the American professional wrestling promotion WWE between the Raw and SmackDown brands. Instead of a traditional draft, changes between the brands were made behind the scenes, with moving wrestlers simply appearing on a brand's show or announced via WWE's website or social medias. It was a two-day event that took place on the April 10 and 11 episodes of Monday Night Raw and SmackDown Live, respectively, on the USA Network in the United States. Raw was broadcast from Uniondale, New York at the Nassau Veterans Memorial Coliseum, while SmackDown was broadcast from Boston, Massachusetts at TD Garden.

The history of WWE SmackDown, began with the shows debut on August 26, 1999 in Kansas City, Missouri. The show was originally broadcast on Thursday nights but moved to Friday on September 9, 2005, before returning to Thursdays on January 15, 2015. On July 19, 2016, it was moved to a live broadcast on Tuesday night. SmackDown! debuted in the United States on the UPN television network on April 29, 1999, but after the merger of UPN and the WB, SmackDown! began airing on The CW in September 2006. The show was moved to MyNetworkTV in October 2008, to Syfy on October 1, 2010 and to USA Network on January 7, 2016.

The 2019 WWE Superstar Shake-up was the thirteenth WWE draft – and the last to be branded as the Superstar Shake-up – produced by the American professional wrestling promotion WWE between the Raw, SmackDown, and 205 Live brands. Instead of a traditional draft, changes between the brands were made behind the scenes, with moving wrestlers simply appearing on a brand's show or announced via WWE's website or social medias. The event began on the April 15 and 16 episodes of Monday Night Raw and SmackDown Live, respectively, on the USA Network. The April 15 and 16 episodes were initially the only episodes advertised for the Superstar Shake-up, but more draft moves were confirmed throughout the remainder of the month and into early May.

The 2019 WWE Draft was the fourteenth WWE Draft produced by the American professional wrestling promotion WWE between their Raw and SmackDown brands. Returning to its original name and a traditional draft format, it was the second draft of 2019, following April's Superstar Shake-up. The draft began on the October 11 episode of Friday Night SmackDown and concluded on the October 14 episode of Monday Night Raw, with SmackDown airing on FOX and Raw on the USA Network. It was the first draft in which the brand's television networks were presented as having an influence over WWE's drafting decisions.

WWE, an American professional wrestling promotion based in Stamford, Connecticut in the United States owned by the McMahon family, has been promoting events in New Zealand since 2006.