Anthony Ross Ferreira (born October 4, 1962) is a former Major League Baseball pitcher who played for one month - a September call up with the 1985 Kansas City Royals, logging in 38 days in the major leagues. He pitched only a total of two games and ended the season with 7.94 ERA during the 1985 Kansas City Royals season. Ferreira currently resides in Tarpon Springs, FL.

The 1985 Kansas City Royals season ended with the Royals' first world championship win over their intrastate rivals, the St. Louis Cardinals. The Royals won the Western Division of the American League for the second consecutive season and the sixth time in ten years. The team improved its record to 91–71 on the strength of its pitching, led by Bret Saberhagen's Cy Young Award-winning performance.

The Kansas City Royals are an American professional baseball team based in Kansas City, Missouri. The Royals compete in Major League Baseball (MLB) as a member team of the American League (AL) Central division. The team was founded as an expansion franchise in 1969, and has participated in four World Series, winning in 1985 and 2015, and losing in 1980 and 2014.

Daniel Raymond "Quiz" Quisenberry was an American right-handed relief pitcher in Major League Baseball who played primarily for the Kansas City Royals. Notable for his submarine-style pitching delivery and his humorous quotes, he led the American League in saves a record five times, and retired in 1990 with 244 saves, then the 6th-highest total in major league history. 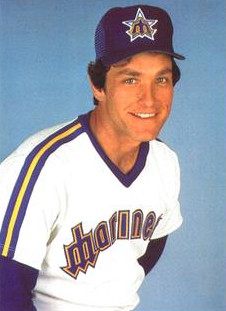 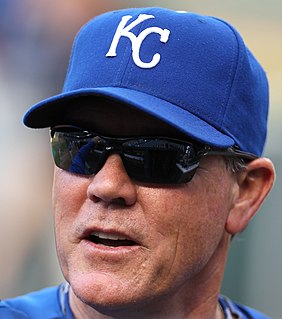 Frank White Jr. is an American politician and former professional baseball player, who spent 18 years with the Kansas City Royals of Major League Baseball (MLB). After his playing career, he has worked as a professional baseball coach and sports commentator, and has been elected to public office in Jackson County, Missouri.

John David Wathan is a former Major League Baseball catcher and manager for the Kansas City Royals. In 1982, he stole 36 bases, breaking the single-season record for catchers set by Ray Schalk in 1916 despite his suffering a fractured ankle earlier in the season.

The 1985 Major League Baseball season ended with the Kansas City Royals defeating the St. Louis Cardinals in the seventh game of the I-70 World Series. Bret Saberhagen, the regular season Cy Young Award winner, was named MVP of the Series. The National League won the All-Star Game for the second straight year.

Joseph Roy Burke was an American front office executive in Major League Baseball who served as general manager or club president of the Kansas City Royals for almost 18 years during the most successful period in that expansion team's early history.

The 1981 Kansas City Royals season was a season in American baseball. It involved the Royals finishing 4th in the American League West with a record of 50 wins and 53 losses. The season was suspended for 50 days due to the infamous 1981 players strike and the league chose as its playoff teams, the division winners from the first and second halves of the season, respectively. Because of this, despite a losing record and a 4th place overall finish, the Royals, having won the AL West in the second half of the season, qualified for the postseason, becoming the only team in MLB history to do so with a losing record.

William Charles Fischer was an American professional baseball pitcher who played in Major League Baseball from 1956 to 1964 for the Chicago White Sox, Detroit Tigers, Washington Senators, Kansas City Athletics and Minnesota Twins. He later was a longtime pitching coach at the major and minor league levels. He stood 6' (183 cm) tall, weighed 190 pounds (86 kg) and threw and batted right-handed. He was born in Wausau, Wisconsin.

Art Stewart is a front-office executive and former Director of Scouting for the Kansas City Royals, a Major League Baseball team.

The Kansas City Royals' season of 2010 was the 42nd for the Royals franchise. It was also the 25th anniversary of their first World Series championship (1985).

The Cardinals–Royals rivalry is a Major League Baseball (MLB) interleague rivalry between the St. Louis Cardinals of the National League (NL) Central division and the Kansas City Royals of the American League (AL) Central division. The rivalry between the two clubs is also known as the Show-Me Series or the I–70 Series because the two cities are both located in the U.S. state of Missouri and are also connected by Interstate 70. Both teams played against each other for the first time in the 1985 World Series, which the Royals won 4-3. Owing to their geographical proximity, these two teams face each other every regular season in interleague play.