Fox, a wing, was born in Kogarah, New South Wales and claimed 1 international rugby cap for Australia on the Wallabies' 1957–58 Australia rugby union tour of Britain, Ireland and France.

John Welborn is a former Australian rugby union player, who plays at the lock position. He is a former Wallaby. He was the first Western Australian-born player to represent Australia in rugby union, and played six matches for the Wallabies.

Viliami Ofahengaue, widely known as Willie O, is a former rugby union player who earned 41 caps for the Australian Wallabies from 1990 to 1998, and played in the World Cups of 1991 and 1995 as well as the 1993 World Cup Sevens. 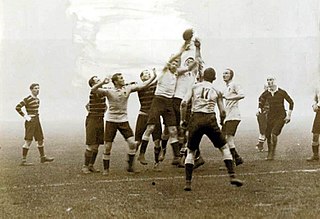 Thomas Sydney Griffen was an Australian rugby union player who competed in the 1908 Summer Olympics.

Between late 1957 and March 1958 the Australia national rugby union team – the Wallabies – conducted a world tour encompassing Britain, Ireland, France and Canada on which they played five Tests and thirty-one minor tour matches. The Wallabies won 17, lost 16 and drew three of their games in total. They lost all five Tests of the tour.

Charlie Fox was an Australian rugby union player, a state and national representative second-rower who made 36 appearances for the Wallabies, playing in 17 Test matches and captained the national side on seven occasions in 1925.

Between October 1966 and March 1967 the Australia national rugby union team – the Wallabies – conducted a world tour on which they played five Tests and thirty-one minor tour matches. Under the captaincy of John Thornett they toured UK, Ireland, France and Canada winning nineteen matches, losing fourteen and drawing three. At one stage they failed to win in four successive matches although in the Test match against England they gave the home side its heaviest defeat in 16 years. The tour marked the climax of the successful "Thornett Era" of Australian Rugby, buoyed by the leadership skills of skipper John Thornett and the outstanding abilities of greats of the game like Ken Catchpole, Peter Johnson and Rob Heming. Dick Marks and Peter Crittle also toured and would later become among the most influential administrators of Australian rugby.

Anthony John "Tony" Gray, is a former Wales international rugby union player and former Head Coach of the Wales national rugby union team. A flanker, he played his club rugby for Newbridge and London Welsh. As a coach he took the Welsh team to third place in the inaugural Rugby World Cup, a feat not yet equalled. 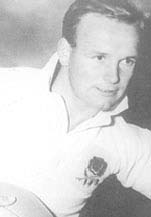 Richard Eric Gautrey Jeeps,, known as Dickie Jeeps, was an English rugby union player who played for Northampton having started his career with Cambridge Rugby Club. He represented and captained both the England national rugby union team and the British Lions in the 1950s and 1960s. He subsequently became a sports administrator and Chairman of the Sports Council. He was appointed CBE in 1977.

Greg J Martin is an Australian rugby union player. He played as a fullback. He earned 9 Wallaby caps in 1989 and 1990, and 65 caps for the Queensland Reds. He played club rugby for the Brisbane club University for 18 years.

Arthur E. Toby (1903–1984) was a rugby union player who represented Australia and a professional rugby league footballer in the NSWRFL.

Anthony O'Connor was a Welsh rugby union player who played in the scrum-half position. O'Connor played club rugby with Aberavon RFC, was capped five times for Wales, and was a member of the British Lions team that toured in 1962. He also represented Oxford University RFC, playing in the 1958 Varsity Match.