As a player, he was a Midfielder from 1993 until 2008, notably spending time in the Premier League with Everton and Manchester City. He also played in the Football League for Swindon Town, Tranmere Rovers, West Bromwich Albion, Burnley, Crewe Alexandra, Accrington Stanley and Chester City. He was capped once by England U21 in his career.

Tony Grant signed as a trainee for Everton. He made his debut for 'The Toffees' two years later in a 1–0 defeat at Manchester City in December 1993. He started as Everton won the 1995 FA Charity Shield. [1] He bagged his first league goal at Middlesbrough in March 1996. [2] In January 1996, Grant signed for Swindon Town on loan, where he played three games for 'The Robins', scoring one goal. Three years later, Grant was loaned out again, this time to Tranmere Rovers where he played eight games for them and scored one goal. His goal came in Tranmere's 2–0 win over Oxford in the League Cup (Steve Yates getting the opener for Rovers). [3] Tranmere would go on to reach the final of the League Cup that season, by which time Grant had returned to Everton. Grant's second and final league goal for Everton came in a 2–2 draw at Barnsley in February 1998. [4]

On Christmas Eve, December 1999, Tony Grant signed for Manchester City for a fee of £450,000. Grant made his debut for City in the 2–0 win over West Brom, but during his time at City he never scored. Grant was then loaned out to West Bromwich Albion in December 2000, where he played five games for 'The Baggies'.

In October 2001, Grant moved to Burnley signing for a fee of £250,000. Grant soon became regarded as an excellent signing by Stan Ternent and went on to play 141 games for 'The Clarets', scoring three goals. During his time at Burnley he was most frequently played in the defensive-midfield role, which enabled him to display his range of passing and game-reading ability. Grant became an important member of the team, but was released on a free-transfer at the end of the 2005 season after refusing a new contract offer.

He then moved to Bristol City on a free transfer, but only played one game for them; Bristol City's 4–2 League Cup defeat to Barnet. In January 2006, after injury problems, Grant signed for Gradi's Crewe Alexandra, and made ten appearances before the end of the 2005–06 season, but failed to rescue Crewe from relegation to the English League One. He signed a new one-year deal to play for Crewe on 1 June 2006.

Tony became player coach at Crewe Alexander 2006–2007, working closely with Dario Gradi at Championship and League One level. Tony then moved on to Accrington Stanley and Chester City 2007-2009 as first team player coach at League Two level. Tony joined Blackburn Rovers U18 as coach in 2010 to 2012, here he brought new ideas to the club with the emphasis on development. Here they Won the Academy Elite league, finalists in the FA Youth Cup and also the Premiere League cup, a feat unrivalled in English Academy system to date. Tony then moved to the First team coach role for Blackburn Rovers from 2012 to 2015, here they survived relegation, reached the FA cup quarter final losing by the odd goal to Liverpool, they finished the League in position 7th just missing out on the playoffs. Tony returned to Everton as a first team European scout in October 2016 to present. Named Blackpool's assistant manager on 14 March 2019.

Accrington Stanley Football Club is a professional association football club based in Accrington, Lancashire, England. The club competes in League One, the third tier of the English football league system. They have spent their complete history playing at the Crown Ground. The club came to national prominence in 1989 due to the Milk Marketing Board's popular television advert that featured the slogan Accrington Stanley, Who Are They?. 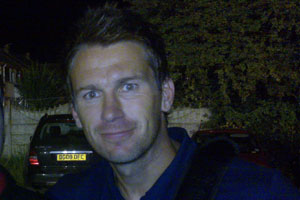 Gareth Keith Taylor is a Welsh football manager and former player who is the head coach of Manchester City Women. 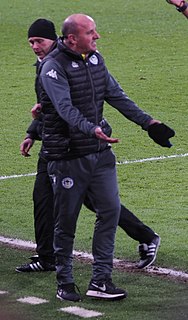 Paul Anthony Cook is an English professional football manager and former player who was most recently the manager of League One club Wigan Athletic.

Andrew Francis Mangan is an English footballer who played as a striker.

Michael Symes is an English former professional footballer who played as a striker.

James William Harris is an English professional footballer who plays as a midfielder for Wrexham.

Gregg Steven Blundell is an English retired footballer who played as a striker. He is now a physiotherapist for Liverpool Prior to his appointment at Tranmere he combined playing football and being the club's physiotherapist at Barrow AFC in the Conference National.

Alan Navarro is an English former professional footballer who played as a midfielder.

The 2007–08 season of Crewe Alexandra Football Club's 84th competitive season. They competed in Football League One. 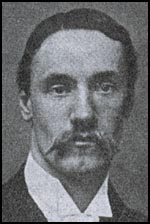 The 2010–11 season achieved the highest ever league placing for Accrington Stanley to date when they reached 5th in League Two, beating their previous best of 15th in 2009–10. This took them through to the League Two Play Offs for the first time, where they lost to Stevenage 3-0 on aggregate in the semi final.

During the 2011–12 season, Accrington Stanley F.C. competed in League Two. This was their 6th season in the Football League and 14th was their second highest position.

The 1921–22 season was the first season of league football played by Tranmere Rovers. They joined the Football League Third Division North, when it was established after the restructuring of the English league system. The club played their first fixture, against Crewe Alexandra, at Prenton Park on 27 August 1921, winning 4–1.

Paul Philip Mullin is an English professional footballer who plays as a forward for League Two club Cambridge United.

The 2019–20 season is Fleetwood Town's 112th season in their history and sixth consecutive season in League One. Along with League One, the club will also participate in the FA Cup, EFL Cup and EFL Trophy.