Tony Hakaoro (died September 1, 2017) was a Cook Islands broadcaster and radio talk show host. Hakaoro hosted one of the country's most popular, daily radio talk shows, "Karangaranga," on Radio Cook Islands. [1] He was known to publicly criticize Cook Islander politicians on his shows, which earned him a loyal audience. [1] [2]

Hakaoro died on September 1, 2017, following a massive stroke and subsequent coma. [1] He was buried in Titikaveka on September 7, 2017. [1] The Office of the Prime Minister issued a statement calling Hakaoro a "formidable warrior." [1] [2]

Talk radio is a radio format containing discussion about topical issues and consisting entirely or almost entirely of original spoken word content rather than outside music. Most shows are regularly hosted by a single individual, and often feature interviews with a number of different guests. Talk radio typically includes an element of listener participation, usually by broadcasting live conversations between the host and listeners who "call in" to the show. Listener contributions are usually screened by a show's producers in order to maximize audience interest and, in the case of commercial talk radio, to attract advertisers. Generally, the shows are organized into segments, each separated by a pause for advertisements; however, in public or non-commercial radio, music is sometimes played in place of commercials to separate the program segments. Variations of talk radio include conservative talk, hot talk, liberal talk and sports talk.

WBZ is a Class A clear channel AM radio station licensed in Boston, Massachusetts. Formerly owned by Westinghouse Broadcasting and CBS Radio, the station is owned and operated by iHeartMedia. 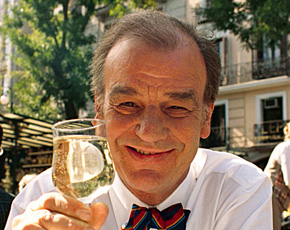 Keith Floyd was an English celebrity cook, restaurateur, television personality and "gastronaut" who hosted cooking shows for the BBC and published many books combining cookery and travel. On television, his eccentric style of presentation – usually drinking wine as he cooked and talking to his crew – endeared him to millions of viewers worldwide.

The Majority Report with Sam Seder is a listener-supported internet talk radio program and podcast hosted by actor/comedian Sam Seder. The program focuses on the discussion of current events and political affairs from a liberal, progressive and a social democratic standpoint; to this end, comedy and satire are used from time to time to make key points. Originally airing on the Air America radio network, from March 2004 until July 2006 the show was hosted by actress/comedian Janeane Garofalo; Garofalo was reportedly originally asked by Air America to host the program and suggested Seder as a co-host.

WBIN is a commercial AM radio station licensed to Atlanta, Georgia. It is owned by iHeartMedia, through its subsidiary Citicasters Licenses. It serves the Atlanta metropolitan area as its affiliate for the Black Information Network. The station's studios and offices located at the Peachtree Palisades Building in the Brookwood Hills district. The transmitter site is off Joseph E. Boone Boulevard Northwest in the Center Hill neighborhood of Atlanta.

WIP-FM is a commercial FM radio station licensed to serve Philadelphia, Pennsylvania. The station is owned by Entercom and broadcasts a sports radio format. The WIP-FM offices and studios are co-located within Entercom's corporate headquarters in Center City, Philadelphia, and the broadcast tower used by the station is located in the Roxborough section of Philadelphia at. 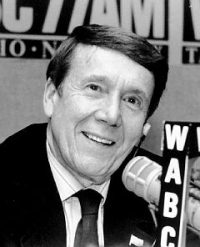 Robert Ciro Gigante, known as Bob Grant, was an American radio host. A veteran of broadcasting in New York City, Grant is considered a pioneer of the conservative talk radio format and was one of the early adopters of the "combat talk" format. Grant's career spanned from the 1950s until shortly before his death at age 84 on December 31, 2013.

Peter Lloyd Price is a British media personality and radio presenter based in Liverpool, England. He is best known for the Sunday night talk radio show Pete Price: Unzipped, which was broadcast across sister stations Radio City and Radio City Talk. The show aired live from 10 pm to 2 am and followed an open forum format. Price also had a weeknight phone in, Late Night City which aired live between 22.00h and 02.00h, from Monday to Thursday and was simulcast on Radio City Talk and Radio City 2. In 2017 Price announced that he was cutting back his show from 5 nights a week to just Sunday night. From 2017-2020 he hosted Pete Price’s Sunday Best at 10pm - 1am every Sunday, where his weekly phone in guest for the last 13 years had been Dr. Angie McCartney, step-mother to Sir Paul, who lives in Los Angeles and provided the show's Hollywood Gossip live from LA. Pete now broadcasts on Liverpool Live Radio every Sunday night at 10pm till 1am.

Donald C. Davidson is the historian of the Indianapolis Motor Speedway, the only person to hold such a position on a full-time basis for any motorsports facility in the world. Davidson started his career as a statistician, publicist, and historian at USAC. His radio program, The Talk of Gasoline Alley, is broadcast annually throughout the "Month of May" on WFNI in Indianapolis, and he is part of the IMS Radio Network.

WTEM – branded The Team 980 – is a commercial sports radio station licensed to serve Washington, D.C. Owned by Urban One and operated by Entercom pending an outright sale, the station services the Washington metropolitan area as a co-flagship station for the Washington Football Team, by virtue of previously being owned by Redskins owner Daniel Snyder's Red Zebra Broadcasting. WTEM is also the market affiliate for the Baltimore Orioles Radio Network, the Maryland Terrapins and Fox Sports Radio, and the radio home of Steve Czaban, Brian Mitchell and Rick Walker. 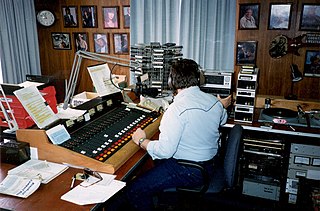 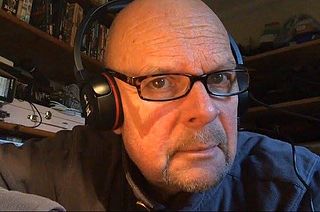 Michael James Whale, known professionally as James Whale, is an English radio personality, television presenter, podcast host and author. He gained initial prominence in the 1980s as the host of The James Whale Radio Show on Radio Aire in Leeds, which was simulcast on national television. From 1995 to 2008, Whale hosted a night time radio show on talkSPORT, followed by stints on LBC 97.3 and various BBC radio stations.

WBSM is an AM radio station broadcasting in the New Bedford/Fall River market area with a News/Talk/Sports format. It broadcasts on 1420 kilohertz and is under ownership of Townsquare Media, with studios in Fairhaven shared with WFHN.

The year 2006 saw a number of significant events in radio broadcasting.

The year 2007 in radio involved some significant events.

Irwin Elliot Shalek, better known as Win Elliot, was an American television and radio sportscaster and game show host who was best known for his long tenures as a play-by-play broadcaster of NHL New York Rangers and NBA New York Knicks games and host of Sports Central USA on the CBS Radio Network.

Steve Wright in the Afternoon is the name given to English DJ Steve Wright's popular radio shows. Wright's show was known by that name from 1989.