Anthony lost his mother at the age of four months, as she died from cancer. He was raised by the help of his aunts and uncles, as his father had 11 siblings. Tony had psychological and learning difficulties when growing up – as he could not read or write at the age of 15, but nowadays reads a book every week.

Kendall worked as an apprentice building merchant, but was given a break by John Kirkland, who allowed him to set up a company. The company went on to make a turnover of £53,000,000 per annum, allowing Kendall to retire early and concentrate on poker.

He shared his beginning on the poker circuit with Julian Thew and Ian Oldershaw. In 2003 Kendall finished in the money of three tournaments, scooping over $5,000. His highest finish was at the £100 pot limit Omaha event at the Napoleons Owlerton Casino, Sheffield on 12 June 2003. He finished 5th out of 69 entries and 94 rebuys.

2004 was a busy year for Kendall, seeing him cash in ten tournaments. His highest finish and prize money was 2nd and $14,386, at the £150 pot limit hold'em Grosvenor Grand Challenge 2004 at the Grosvenor Casino, Luton on 23 January. The tournament saw 129 entrants and 315 rebuys. He earned $51,014 in prize money throughout the year, and began writing articles on The Hendon Mob and for Poker Europa.

2005 was an even busier year for Kendall, as he cashed in fifteen tournaments. Kendall cashed in events of both the World Series of Poker (WSOP) and the European Poker Tour (EPT). Although entering both of these prestigious tournaments his highest earning tournament of that year (and his career to date), was at the SportingOdds.com London Poker Masters at the Gutshot Card Club, London on 1–2 October. Although he finished runner-up, he collected $27,895 in prize money. This was his highest earning yet to date, accumulating over $63,000. He was invited to Screen Test as a Presenter for Poker 425, & got the job, the show airing nightly for the rest of the year. He also became a contributor to Cardplayer Europe, continued to write for Poker Europa, started up www.blondepoker.com with Dave and Rhowena Colclough in January. Accepted an offer from Sporting Odds to become their Site Pro.

He began presenting on the Sky Poker channel in October and was offered the role of Poker Consultant, which he accepted. He later screen-tested for an analysts role on the same show, where he was given the job as the Grandad of Sky Poker. He was hired by William Hill to help organise, host, and run their four Land-Based Qualifiers for the William Hill Grand Prix. Kendall became the chairman and one of the founders of the Amateur Poker Association & Tour (APAT) . 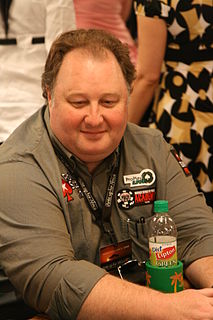 Gregory Raymer, nicknamed "Fossilman," is a professional poker player and author. He is best known for winning the 2004 World Series of Poker Main Event. 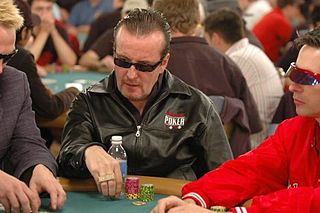 David A. Ulliott, known by the nickname Devilfish, was an English professional gambler and poker player. Formerly, Ulliott was a minor figure in the Hull underworld, but went on to become a World Series of Poker bracelet-winner, and a mainstay of televised poker. At the poker table, he was known for wearing orange-tinted prescription sunglasses, a sharp suit and gold knuckleduster rings reading "Devil" and "Fish", which he made himself. In 2017 he was elected to the Poker Hall of Fame. 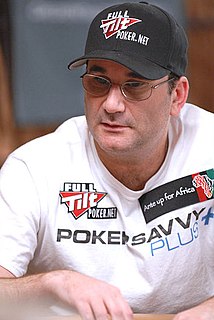 Michael Matusow is an American professional poker player residing in Henderson, Nevada. Matusow's nickname of "The Mouth" reflects his reputation for trash-talking at the poker table. He is also known for sometimes ruining hours or days of good play with a single misjudgment.

Garry "The Whacker" Bush is an English professional poker player based in London. 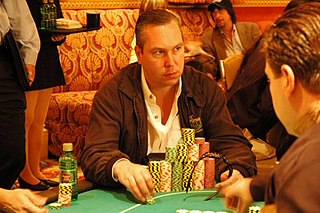 Joseph Charles Beevers is an English professional poker player and a member of The Hendon Mob.

Barny M. P. Boatman, is an English professional poker player and the oldest member of the poker-playing foursome known as The Hendon Mob. He is the older brother of Ross Boatman, and resides in Archway. 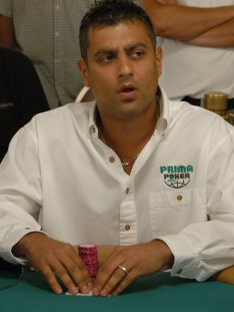 J. C. Tran is a Vietnamese-American professional poker player, based in Sacramento, California.

Marty Smyth is a professional poker player from Belfast, Northern Ireland with a track record including wins in the 2007 Irish Poker Open Championship and the 2008 Poker Million. He won his first WSOP bracelet in the 2008 $10,000 Pot Limit Omaha World Championship.

Phil Galfond is an American professional poker player. Galfond won three World Series of Poker bracelets, in the $5,000 buy-in pot-limit Omaha with rebuys event in 2008, the $10,000 no-limit 2-7 single draw championship in 2015 and the $10,000 Pot Limit Omaha Hi-Lo 8 or Better Championship in 2018. Due to his success as a high-stakes online player, he appeared on multiple seasons of GSN's High Stakes Poker.

Dario Alioto is a professional poker player from Palermo, Italy. Alioto's first major success in poker came at the European Poker Tour 2005 Barcellona main event, where he finished in 7th place and earned €52,000. Right after this score, he started grinding PLO cash games that became his best poker game, rapidly becoming one of the best Italian professional players. Later on in his career, he won his first World Series of Poker bracelet in the £5,000 Pot Limit Omaha event at the 2007 World Series of Poker Europe. Alioto earned £234,390 for his finish. He has also had success at the 2008 World Series of Poker, where he has earned over $230,000 from four cashes. A well-respected cash game player online and live, he played most of the many televised Italian high-stakes cash games in the last few years. He now plays a wide variety of games and is now considered one of the best all-around players in Europe.

The Super Bowl of Poker was the second most prestigious poker tournament in the world during the 1980s. While the World Series of Poker was already drawing larger crowds as more and more amateurs sought it out, the SBOP "was an affair limited almost exclusively to pros and hard-core amateurs."

The Super Bowl of Poker was the second most prestigious poker tournament in the world during the 1980s. While the World Series of Poker was already drawing larger crowds as more and more amateurs sought it out, the SBOP "was an affair limited almost exclusively to pros and hard-core amateurs."

Sam Trickett is an English professional poker player. He is best known for finishing second, losing heads-up to Antonio Esfandiari in the Big One for One Drop - winning over $10 million in prize money. He is currently the twelfth-highest earner in tournament play of all time. 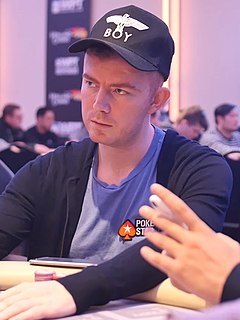 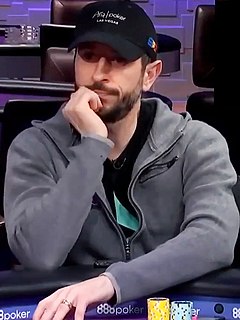