Tony Mundine may refer to:

Jesse Burnett was a light-heavyweight and cruiserweight boxer. His professional record was 23-18-2 with 11 knockouts. He is best remembered as the spoiler who won a twelve round decision in a WBC cruiserweight elimination bout over former world light-heavyweight champion Victor Galindez of Argentina in 1980, sending Galindez into retirement. In Burnett's two tries at a world title, he was stopped in the ninth round of a 1977 vacant WBC light-heavyweight title bout by Miguel Angel Cuello, and stopped in the eighth round of a 1980 WBC cruiserweight title bout against S.T. Gordon. Burnett also fought such other fighters as former heavyweight champion Leon Spinks, former light-heavyweight champion John Conteh, former light-heavyweight champion Eddie Mustafa Muhammad, and other contenders such as Yaqui Lopez, James Scott, Jerry Martin, Tony Mundine, Bash Ali, Willie Edwards, Mustafa Wassaja, Willie Edwards, Lotte Mwale, and many others. This was before he married Polita then went into retirement. He has two wonderful children, Jesse Jr. and Stephanie. Due to his boxing career, Jesse was able to travel to faraway and distant lands such as Europe as well as small ones such as Belize, where he was able to meet in-laws that also grew into legends. Stars such as his stepson Liberato, a successful businessman, and a brother-in-law Leroy McKenzie better known as Sarge, one of the best in Belizean soccer and a legend in Belize.

Beau Mundine is an Australian minor-league rugby league footballer. He has played for the South Sydney Rabbitohs in the National Rugby League competition. His position of choice is in the centres. 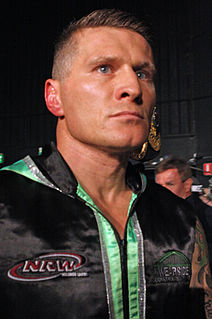 Sam Soliman is an Australian former professional boxer, kickboxer and mixed martial artist. In boxing he competed from 1997 to 2019, and held the IBF middleweight title in 2014.

Nyunggai Warren Stephen Mundine is an Australian Aboriginal leader and politician. He was the National President of the Australian Labor Party (ALP), but quit the party in 2012. Mundine was appointed chairman of the Coalition government's Indigenous Advisory Council by then-prime minister, Tony Abbott. Mundine was the Liberal Party's unsuccessful candidate for the marginal seat of Gilmore on the south coast of New South Wales in the 2019 Australian federal election.

Mundine may refer to any of the following people

Baryulgil is a rural locality in north-eastern New South Wales, Australia. The locality is on the Clarence River in the Clarence Valley Council local government area. It is the birthplace of Australian cricketer Jack Marsh and former boxer Tony Mundine.

Monty Betham was a professional boxer who fought boxers such as Tony Mundine, and Lance Revill in a professional career beginning in 1973 until 1984. He is the father of former New Zealand Warriors rugby league star Monty Betham. He is also the older brother of Richard Betham, who won a bronze medal for Western Samoa in boxing at the 1978 Commonwealth Games.

Sean Sullivan is a professional boxer from New Zealand. He was ranked as the world's seventh best welterweight by the WBA and the IBF. Sullivan has held national titles in six weight divisions in New Zealand. Sullivan has been inactive since 2008 but has not formally announced his retirement. He was working as a debt-collector as of 2009. In 2009 he was jailed for six months for defrauding Housing New Zealand.

Johnny Greenwood is an Australian country music singer. Greenwood recorded pop songs in London in the 1960s, before returning to record for RCA Australia. In 1973 Greenwood released a tribute single on RCA to the champion Australian boxer Tony Mundine. In the year 1975, he released his best known trucking song "Big Bill".

The Yugambeh-Bandjalangic peoples, are an Aboriginal Australian ethnolinguistic group identified by their use of one of more of the Yugambeh-Bundjalung languages and shared cultural practises and histories. There are roughly 15 individual groups, who together form a wider cultural bloc or polity often described as “Bundjalung” or "Three Brothers Mob".