WXYT-FM, 97-1 The Ticket, is a commercial sports radio station owned by Entercom, licensed to Detroit, Michigan and serving Metro Detroit. Most programming is local with CBS Sports Radio supplying overnight and some weekend shows.

WXYT is a commercial radio station licensed to Detroit, Michigan broadcasting a sports talk format. The station serves the Detroit-Windsor market and the Southeastern Michigan and Southwestern Ontario areas. Its transmitter is in Monroe County at Ash Township and operations and studios are at Entercom's facilities in Southfield, Michigan. WXYT is a 50,000 watt, Class B station broadcasting on a regional frequency. It is not a clear-channel station because of its frequency and highly directional antenna.

After he graduated from Cooley High School in Detroit, Tony enrolled at Specs Howard School of Media Arts. In 1986, Ortiz began his radio career as an intern at WXYT-AM, where he later he gained a paid position with the station. He first worked as a producer for Michigan State basketball and football. In 1991, Ortiz left WXYT-AM and joined sister station WWJ, going on to produce Detroit Lions football. [2]

Thomas M. Cooley High School is located at the intersection of Hubbell Avenue and Chalfonte Street, on the northwest side of Detroit, Michigan. The three-story, Mediterranean Revival-style facility opened its doors on September 4, 1928.

Specs Howard School of Media Arts is a for-profit college, dedicated to preparing people for a career in radio and television broadcasting, graphic design, and digital media arts. It is based in Southfield, Michigan, USA and is named after its founder, Specs Howard.

WWJ, 950 kHz, is an all-news AM radio station located in Detroit, Michigan. Owned by Entercom, its studios are in the Panasonic Building in Southfield, and its transmitter site is near Newport. WWJ is licensed by the Federal Communications Commission to broadcast in the HD Radio format. It is also simulcast on an HD subchannel of sister station WXYT-FM.

KTRH is a commercial AM radio station licensed to Houston, Texas and owned by iHeartMedia, Inc. that airs a talk radio format. Programming is also heard on co-owned KQBT's HD 3 channel at 93.7 MHz, and the station uses the iHeartRadio platform to stream its webcast. Its studios are located along the West Loop Freeway (I-610) in the city's Uptown district. The transmitter site is in unincorporated Liberty County, off Cox Road in Dayton.

KILT is a Sports/Talk formatted radio station in Houston, Texas. The station is currently owned by Entercom. KILT shares its call sign with its sister station KILT-FM 100.3 FM, which airs a country music radio format. Its studios are located in the Greenway Plaza district, and its transmitter is located on West Road, between Ella Boulevard and the Interstate 45 North Freeway, near Greenspoint in unincorporated Harris County.

Since 2001 from 2016, Ortiz has provided sideline reports for the Detroit Lions Radio Network. [4] He also co-hosted the network's pre-game show The Lions Roundtable and flagship station WXYT-FM's local pre-game show Lions Game Day. [5] He was joined by play-by-play announcer Dan Miller and color commentator Jim Brandstatter, and on The Lions Round Table, Detroit Free Press Lions beat writer Nick Cotsonika. He is also a Detroit Lions and Detroit Tigers beat reporter for WXYT-FM / AM and provides sports updates during the breaks of some WXYT-FM / AM and WWJ shows. He also hosts a weekly Lions discussion show on the station during the regular season. He also appears on Fox 2 SportsWorks, WJBK-TV's weekly local Detroit sports talk show. He also frequently appears on WJBK Sports segments such as Lions Beat Writer Cross Fire. [6]

The Detroit Lions Radio Network is a radio network that broadcasts all of the NFL's Detroit Lions games and related programming. All preseason, regular season, and postseason games are aired live throughout the network. WJR in Detroit is its flagship station. As a maximum power clear-channel station, WJR can be heard carrying Lions games from hundreds of miles away on clear nights. The announcers are WJBK sports director Dan Miller with play-by-play and former Lions offensive tackle Lomas Brown with color commentary. Network coverage begins one hour before game time and ends one hour after the game's conclusion.

Dan Miller is an American sportscaster based in Detroit, Michigan. He currently works as the sports director and anchor on WJBK and as a radio play-by-play announcer on the Detroit Lions Radio Network.

WJR is a radio station in Detroit, Michigan, United States. It is owned by Cumulus Media and broadcasts a News/Talk format. Its studios are located in the Fisher Building in the New Center neighborhood of Detroit, while its transmitter is located in the Downriver community of Riverview.

WDIV-TV, virtual channel 4, is an NBC-affiliated television station licensed to Detroit, Michigan, United States. The station serves as the flagship broadcast property of the Graham Media Group subsidiary of Graham Holdings Company. WDIV maintains studio facilities—which also house the headquarters of Graham Media Group—on West Lafayette Boulevard in Detroit. As such, WDIV-TV is the only major television station in the market whose offices and studios are located in Detroit proper, while the market's other television stations are located in Southfield.

WWJ-TV, virtual channel 62, is a CBS owned-and-operated television station licensed to Detroit, Michigan, United States. The station is owned by the CBS Television Stations subsidiary of CBS Corporation, as part of a duopoly with CW owned-and-operated station WKBD-TV. The two stations share studio facilities in the Detroit suburb of Southfield; WWJ-TV's transmitter is located in Oak Park, Michigan.

WDFN is a sports-talk radio station in the Detroit, Michigan market. It broadcasts in the AM radio band at 1130 kHz, which is a clear-channel frequency. WDFN is not considered a clear-channel station because of its Class B status. WDFN is owned by iHeartMedia, and until the end of the 2008-09 NBA season, was the flagship station for the Detroit Pistons. It is affiliated with Fox Sports, as well as MRN and PRN for NASCAR coverage. WDFN is one of four sports-talk stations in metro Detroit, the others being WXYT, WCAR, and WXYT-FM. WDFN is the only one of the four sports stations that carries a significant amount of community programming and infomercials unrelated to sports.

KFRU is a radio station located in Columbia, Missouri, broadcasting with 1 kW of power. Its programming format consists primarily of news, talk and sports. The station is licensed to Cumulus Media.

Pat Caputo is an American sports writer and radio talk show host based in Southeast Michigan. He is a sports columnist for the Oakland Press and an on-air host for WXYT-FM in Detroit. Caputo hosts a radio show, "Caputo and Fithian" with Dennis Fithian. He also appears regularly on the WJBK local sports discussion show SportsWorks.

The Detroit Tigers Radio Network is a network of radio stations in Michigan, Northwest Ohio and Northern Indiana that air Major League Baseball's Detroit Tigers games and related programming. The network airs all 162 regular season games and all postseason games. Dan Dickerson does play-by-play on the broadcasts and former Tiger catcher Jim Price does color commentary. Jeff Riger is the studio host. The flagship stations are WXYT and WXYT-FM in Detroit. 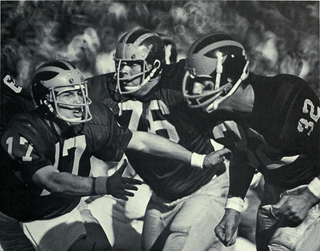 James Patrick Brandstatter is an American sports announcer. He is the radio play-by-play for the Michigan Wolverines football team. He held the position of color commentator for the Detroit Lions for 31 years until the end of the 2017 season. Brandstatter is also a sports television show host and former radio show host; both TV and radio shows about Michigan football. He played college football for the Wolverines, from 1969 to 1972, where he was a standout offensive tackle. Brandstatter has written two non-fiction books about UM experiences, both of which were best-sellers in the sports category. His other positions include the two-time president of the Detroit Sports Broadcasters Association. Brandstatter leaving the Detroit Lions radio broadcast was announced on July 10, 2018.

The Michigan IMG Sports Network is an American radio network consisting of 46 radio stations which carry coverage of Michigan Wolverines football and men's basketball. WWJ/Detroit (950 AM) serves as the network's flagship station. The network also includes 45 affiliates in the U.S. states of Michigan and Ohio: 28 AM stations, 4 of which extend their signals with low-power FM translators; and 17 full-power FM stations.