Tony Pignatiello (born 29 April 1968) is a retired Canadian soccer player who played at both professional and international levels as a midfielder.

Pignatiello earned twelve caps for the Canadian national side in 1988, scoring one goal. [5]

Andres Arango is a Colombian-born Canadian former soccer player who played in the Canadian Professional Soccer League, USL A-League, and the North American Soccer League. Arango is currently the head coach for the Tampa Bay Rowdies' U23 side that competes in USL League Two.

Igor Vrablic is a Canadian former soccer player who played at both professional and international levels, as a striker.

Shaun Lowther is a former Canadian national soccer team defender who spent five seasons in the North American Soccer League. He is currently an executive of a youth soccer club in Calgary.

Charlie Falzon is a Canadian retired soccer player who spent time in the North American Soccer League and Major Indoor Soccer League. He also earned nine caps with the Canadian national soccer team between 1983 and 1989. Charlie is currently an advanced care paramedic working for Toronto EMS.

András Törőcsik is a former Hungarian footballer of the 1970s and 1980s. From 1977 to 1984 he made 45 appearances and scored 12 goals for the Hungarian National Football Team. He appeared at the 1978 FIFA World Cup and the 1982 FIFA World Cup. He played for Újpest Dozsa, Montpellier, Volán FC, North York Rockets and MTK Budapest. 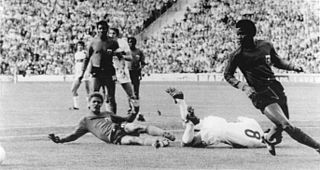 Arsène Auguste was a Haitian international footballer who represented Haiti in the 1974 FIFA World Cup.

Pat Cubellis is a Canadian former soccer player who earned four caps for the national team in 1986.

Jeff Cambridge is a Canadian retired association football player who earned 7 caps for the Canadian national side between 1984 and 1987. He played club football for Winnipeg Fury from 1987 to 1990.

Stephen Francis Jansen is a Canadian former soccer player who earned 8 caps for the Canadian national side between 1988 and 1989. Born in Toronto, Ontario, Jansen played club football for North York Rockets and Toronto Blizzard. His sister is figure skater Astrid Jansen.

The 1977 San Jose Earthquakes season was the club's fourth season of existence as a franchise in the North American Soccer League, then the top-tier of American soccer. The Earthquakes finished in third place in the Southern Division of the Pacific Conference, strong enough to qualify for the playoffs.

The 1978 Vancouver Whitecaps season was the fifth season of the Whitecaps, and their fifth year in the North American Soccer League and the top flight of Canadian soccer.

The 1983 Golden Bay Earthquakes season was the tenth for the Earthquakes franchise in the North American Soccer League. They finished second in the Western Division and defeated the Chicago Sting in the playoff quarterfinals. The Earthquakes' run came to an end in the semifinals when the Toronto Blizzard earned two shutout wins.

The 1976 San Jose Earthquakes season was their third in the North American Soccer League, and they finished in first place in the Southern Division of the Pacific Conference. In the playoffs, they defeated the Dallas Tornado in the Conference Semifinals, 2-0 at Spartan Stadium. The Minnesota Kicks beat the Earthquakes, 3-1 in the Conference Championship played at Metropolitan Stadium in Minnesota.