Tony Rotherham is an English historian, living history re-enactor, film extra, teacher, fight choreographer, stuntman, weapon expert and Robin Hood. He was previously Nottingham's official Robin Hood and has been doing this kind of work for many years.

Rotherham trained at the Andrew Van Der Hauser Academy of Sword in the Netherlands and learned a very high degree of combat. He worked in film and television as a fight choreographer and actor for many years.

Rotherham has been studying the history of Robin Hood ever since he was 18 years old, including the history behind the ballads. He has been giving lectures on the subject for over 20 years and is also the founder of several successful and award-winning historical recreation societies: Spirit of England, The Company of the White Boar, Sea Thieves Pirate Association and Stand and Deliver The English Highwayman's Association.

Rotherham played King James in the documentary 'The Battle of Flodden', and Sam Gregory in the Channel 5 documentary 'The Real Dick Turpin'. He was the assistant director additional scenes in a 1999 film adaptation of King Lear, and has worked on many other films, including Highlander 1 & 2, Merlin The Quest Begins and several documentaries. 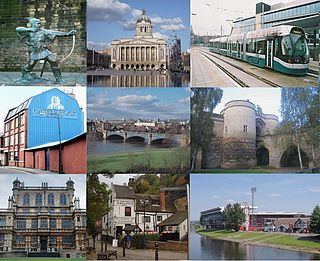 Nottingham is a city and unitary authority area in Nottinghamshire, England. Part of the East Midlands region, it is 128 miles (206 km) north of London and 45 miles (72 km) northeast of Birmingham.

Robin of Sherwood is a British television series, based on the legend of Robin Hood. Created by Richard Carpenter, it was produced by HTV in association with Goldcrest, and ran from 28 April 1984 to 28 June 1986 on the ITV network. In the United States it was shown on the premium cable TV channel Showtime and, later, on PBS. The show starred Michael Praed and Jason Connery as two different incarnations of the title character. Unlike previous adaptations of the Robin Hood legend, Robin of Sherwood combined a gritty, authentic production design with elements of real-life history, 20th century fiction, and pagan myth. Robin of Sherwood has been described by historian Stephen Knight as "the most innovative and influential version of the myth in recent times". The series is also notable for its musical score by Clannad, which won a BAFTA award.

Maid Marian is the heroine of the Robin Hood legend in English folklore, often taken to be his lover. She was the subject of at least two plays before 1600, but neither she nor any other female character is known to have featured in the medieval versions of the legend. Her history and circumstances are obscure, but she always commanded high respect in Robin’s circle for her courage and independence, as well as her beauty and loyalty. For this reason she is celebrated by feminist commentators as one of the earliest strong female characters in English literature. 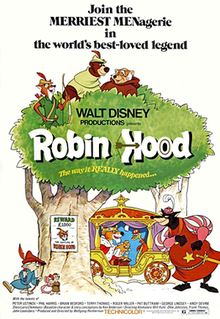 Robin Hood is a 1973 American animated adventure comedy film produced by Walt Disney Productions and released by Buena Vista Distribution. Produced and directed by Wolfgang Reitherman, it is the 21st Disney animated feature film. The story follows the adventures of Robin Hood, Little John, and the inhabitants of Nottingham as they fight against the excessive taxation of Prince John, and Robin Hood wins the hand of Maid Marian. The film features the voices of Brian Bedford, Phil Harris, Peter Ustinov, Pat Buttram, Monica Evans, and Carole Shelley.

Robin Hood is a 1922 adventure film starring Douglas Fairbanks and Wallace Beery. It was the first motion picture ever to have a Hollywood premiere, held at Grauman's Egyptian Theatre on October 18, 1922. The movie's full title, under which it was copyrighted, is Douglas Fairbanks in Robin Hood. It was one of the most expensive films of the 1920s, with a budget estimated at approximately one million dollars. The film was a smash hit and generally received favorable reviews. 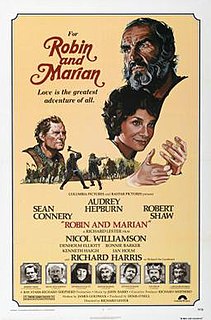 Robin and Marian is a 1976 British-American romance and adventure film from Columbia Pictures, shot in Panavision and Technicolor, that was directed by Richard Lester and written by James Goldman, based on the legend of Robin Hood. The film stars Sean Connery as Robin Hood, Audrey Hepburn as Lady Marian, Nicol Williamson as Little John, Robert Shaw as the Sheriff of Nottingham, Richard Harris as Richard the Lionheart, and Denholm Elliott as Will Scarlet. It also features comedian Ronnie Barker in a rare film role as Friar Tuck. Robin and Marian was filmed in Zamora, as well in Artajona, Urbasa, Quinto Real and Orgi, all small medieval villages in Navarre, Spain. It marked Hepburn's return to the screen after an eight-year absence.

Will Scarlet is a prominent member of Robin Hood's Merry Men. He is present in the earliest ballads along with Little John and Much the Miller's Son.

Robin Hood is a British television programme, produced by independent production company Tiger Aspect Productions for BBC One, with co-funding from the BBC America cable television channel in the United States. Based on the traditional stories of legendary English folk hero Robin Hood, the programme started on 7 October 2006. Series two commenced broadcasting on 6 October 2007 with the final two episodes on 29 December 2007. Series three began airing on 28 March 2009 for a thirteen-episode run. The series was cancelled by the BBC after series three following the departure of multiple actors, including lead Jonas Armstrong.

The Nottingham 'Robin Hood' Marathon, is a race in Nottingham, England held every year since 1981. The race today incorporates a half-marathon and a fun-run. A corporate relay event is also held in which teams of five runners from local companies and businesses run legs of 2–3 miles on the half-marathon course.

Tim Pollard is an English actor and entertainer who has been appearing and performing as Robin Hood in and around his home town of Nottingham, England for over 30 years. He lives and works in the legendary city as well as representing it nationally and internationally in his position as Nottingham's Official Robin Hood. 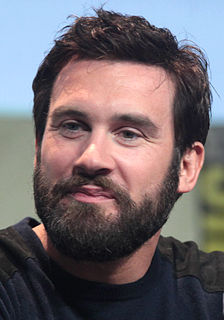 Clive James Standen is an English actor best known for playing Bryan Mills in the NBC series Taken, based on the film trilogy of the same name, as well as Rollo in the History Channel series Vikings, Sir Gawain in the Starz series Camelot, Archer in the BBC One series Robin Hood, and Private Carl Harris in the BBC science-fiction programme Doctor Who.

Nottingham is the seventh largest conurbation in the United Kingdom. Despite this, the city had a poor transport system in the 1980s. The government has in the early twenty-first century invested heavily in the transport network of Nottingham, which has led to the re-opening of the Robin Hood Line and the construction of a light rail network, Nottingham Express Transit.

The Sheriff of Nottingham is the main antagonist in the legend of Robin Hood. He is generally depicted as an unjust tyrant who mistreats the local people of Nottinghamshire, subjecting them to unaffordable taxes. Robin Hood fights against him, stealing from the rich, and the Sheriff, in order to give to the poor; a characteristic for which Robin Hood is best known.

The Sheriff of Nottingham is the main antagonist of the 2006 BBC television series, Robin Hood. Keith Allen's portrayal was described by The Hollywood Reporter as "very camp in the Alan Rickman tradition of sardonic villains," referring to Rickman's role as the Sheriff in the 1991 film Robin Hood: Prince of Thieves. Sarcastic and with a dark sense of humour, he has many catch phrases, including "La di da di da!" and "A clue: no". He also has an explosive temper, usually triggered by Robin's interference or the repeated failures of Guy of Gisbourne and other minions. He has many insults for his servants when they fail him, including "blithering oafs", "incompetent fools" and "idiotic buffoons".

Robin Hood is a 2018 American action-adventure film directed by Otto Bathurst and written by Ben Chandler and David James Kelly, from a story by Chandler. It is a quasi-contemporary retelling of the Robin Hood legend, and follows his training by John to steal from the Sheriff of Nottingham. The film stars Taron Egerton, Jamie Foxx, Ben Mendelsohn, Eve Hewson, Tim Minchin, and Jamie Dornan.

The Sycamore Gap Tree or Robin Hood Tree is a sycamore tree standing next to Hadrian's Wall near Crag Lough in Northumberland, England. It is located in a dramatic dip in the landscape and is a popular photographic subject, described as one of the most photographed trees in the country. It derives its alternative name from featuring in a prominent scene in the 1991 film Robin Hood: Prince of Thieves. The tree won the 2016 England Tree of the Year award.