Tsabedze played domestically for Mhlambanyatsi Rovers before playing professionally in South Africa, appearing in the Premier Soccer League for Silver Stars, Supersport United, Maritzburg United, Engen Santos and Mbabane Swallows. He played for Swaziland in 2017 Africa Cup of Nations qualifying, scoring twice in a 2–1 victory over Guinea on 23 July 2015. [1] 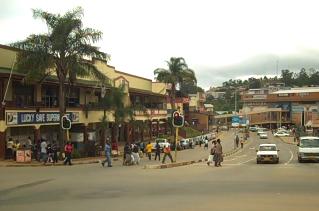 Mbabane is the capital of Eswatini. With an estimated population of 94,874 (2010), it is located on the Mbabane River and its tributary the Polinjane River in the Mdzimba Mountains. It is located in the Hhohho Region, of which it is also the capital. The average elevation of the city is 1243 meters. It lies on the MR3 road.

Hhohho is a region of Eswatini, located in the north western part of the country. Hhohho was named after the capital of King Mswati II, who expanded the Swazi territory to the north and west, taking in the districts of Barberton, Nelspruit, Carolina and Piet Retief. These areas were later acquired by what was the Province of Transvaal and today they form part of the Mpumalanga Province of South Africa. It has an area of 3,625.17 km², a population of 320,651 (2017), and is divided into 14 tinkhundla. The administrative center is the national capital of Mbabane. It borders Lubombo Region on the southeast and Manzini Region in the southwest.

The Premier League of Eswatini, also known as Swazi MTN Premier League due to sponsorship reasons, is the top division of the Eswatini Football Association. It was created in 1971 and plans to be a fully professional entity by 2022.

Mbabane Swallows Football Club is a Swazi football club based in Mbabane.

The Swazi Cup is the top knockout tournament of the Swazi football. It was created in 1980.

The Swazi Charity Cup or Swazi Telecom Charity Cup is the supercup tournament of the Swazi football.

Sibusiso Barnabas Dlamini is a Swazi football striker who currently plays for Malanti Chiefs. He has been capped for Eswatini.

Siza Selby Dlamini is a retired Swazi football striker. He has been capped for Eswatini.

Darren Christie Melusi is Swazi footballer. He plays for Mbabane Swallows in the Swazi Premier League. He is a member of Swaziland national football team, played at the 2012 Africa Cup of Nations qualification, scored one goal.

Manzini Sea Birds FC is a Swazi soccer club based in Manzini.

Umbelebele Jomo Cosmos FC is a Swazi soccer club based in Mbabane -Msunduza. They play in the Swazi first division.

Sabelo Sikhali Ndzinisa is a Swazi footballer, who plays for Mbabane Swallows F.C..

Sandile 'Nkomishi' Ginindza is a Swazi footballer who plays for Mbabane Swallows F.C. and the Swaziland national football team.

Elias "The Horse" Tsabalaka is a Malawian retired footballer born in Zimbabwe.

Richard Sewu is a Ghanaian footballer. He currently plays for Mbabane Swallows F.C..

Banele Sikhondze is a Swazi footballer who plays as a midfielder for Mbombela United and the Eswatini national team.