Tony Wharmby is an English television director and producer.

Wharmby is best known for his directorial work on television series such as JAG , NCIS , The O.C. , Bones , Providence , Coronation Street , High Sierra Search and Rescue, The X-Files , Coins in the Fountain , New Scotland Yard , Gossip Girl , Supernatural and Crossing Jordan , as well as many other series and TV movies.

He is the father-in-law of English film and television composer Debbie Wiseman.

The X-Files is an American science fiction drama television series created by Chris Carter. The original television series aired from September 10, 1993 to May 19, 2002 on Fox. The program spanned nine seasons, with 202 episodes. A short tenth season consisting of six episodes premiered on January 24, 2016, and concluded on February 22, 2016. Following the ratings success of this revival, Fox announced in April 2017 that The X-Files would be returning for an eleventh season of ten episodes. The season premiered on January 3, 2018, concluding on March 21, 2018. In addition to the television series, two feature films have been released: The 1998 film The X-Files, which took place as part of the TV series continuity, and the stand-alone film The X-Files: I Want to Believe, released in 2008, six years after the original television run had ended.

The eighth season of the American science fiction television series The X-Files commenced airing in the United States on November 5, 2000, concluded on May 20, 2001, and consisted of twenty-one episodes. Season eight takes place after Fox Mulder's alien abduction in the seventh season. The story arc for the search of Mulder continues until the second half of the season, while a new arc about Dana Scully's pregnancy is formed. This arc would continue, and end, with the next season. The season explores various themes such as life, death, and belief.

The ninth season of the American science fiction television series The X-Files commenced airing in the United States on November 11, 2001, concluded on May 19, 2002, and consists of twenty episodes. The season takes place after Fox Mulder goes into hiding, following the events of the eighth season finale, "Existence". As such, the main storyarc for the season follows Dana Scully, John Doggett, and Monica Reyes on their hunt to reveal a government conspiracy involving the elaborate and malevolent creation of the "Super Soldiers".

Rob Stanton Bowman is an American film director and producer. He grew up around film and television production, and developed an interest in the field because of the work of his father, director Chuck Bowman. Bowman is a prolific director for television, and has contributed to series such as Star Trek: The Next Generation, and The X-Files, for which he received four consecutive Emmy nominations as a producer. He was an executive producer and director for the comedy-drama Castle. 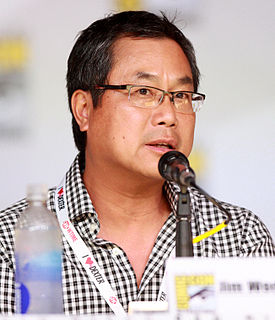 James Wong is a Hong Kong-born American television producer, writer, and film director. He directed and wrote episodes of The X-Files and Millennium and has written episodes for American Horror Story. He is the co-creator and co-writer, along with Glen Morgan, of Space: Above and Beyond. He is also the founder of Hard Eight Pictures. In film he has directed Final Destination, Final Destination 3, The One, and the remakes of Willard, Dragonball Evolution, and Black Christmas, along with writing partner Glen Morgan. 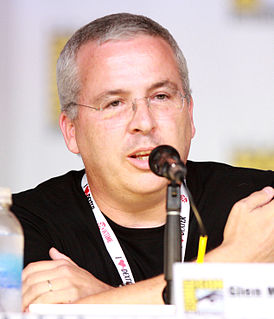 Glen Morgan is an American television producer, writer and director. Most recognized for his work on The X-Files and the Final Destination franchise, Morgan has worked on many other notable projects including Amazon's Lore and New Line Cinema's Willard. In 2017, Morgan was an executive producer on season eleven of The X-Files which premiered in 2018 on Fox. He also serves as an executive producer on The Twilight Zone reboot by Jordan Peele's Monkeypaw Productions.

"Our Town" is the twenty-fourth episode of the second season of the American science fiction television series The X-Files. It premiered on the Fox network in the United States on May 12, 1995. It was written by Frank Spotnitz and directed by Rob Bowman. The episode is a "Monster-of-the-Week" story, unconnected to the series' wider mythology. "Our Town" received a Nielsen rating of 9.4 and was watched by 9.0 million households. The episode received mixed reviews from critics.

Michael Lange is an American television director and record producer.

"Requiem" is the seventh episode in the fifth season, and the 101st overall episode, of the American crime drama television series NCIS. It first aired on CBS in the United States on November 6, 2007. The episode was written by Shane Brennan and directed by Tony Wharmby.

Daniel Sackheim is an American television and film director, producer and photographer. Sackheim has produced and directed for The X-Files, Law & Order, House and NYPD Blue. He also directed The Walking Dead,The Americans, and Ozark, for which he was nominated for an Emmy Award. He has won a Primetime Emmy Award as a director and been nominated twice for his work as a producer and director. Sackheim directed the third and fourth episodes of the sixth season of Game of Thrones.

"Via Negativa" is the seventh episode of the eighth season and the 168th episode of the science fiction television series The X-Files. The episode first aired in the United States and Canada on December 17, 2000, on Fox and subsequently aired in the United Kingdom. It was written by executive producer Frank Spotnitz and directed by Tony Wharmby. It is a Monster-of-the-Week episode, unconnected to the series' wider mythology. The episode earned a Nielsen household rating of 7.3 and was viewed by 12.37 million viewers. It was generally well received by television critics, with many positively commenting on the "eerie" atmosphere of the dream sequences; one critic referred to it as a "superb X-Files episode."

"Trust No 1" is the sixth episode of the ninth season of the American science fiction television series The X-Files. It premiered on the Fox network on January 6, 2002. The episode was written by series creator Chris Carter and executive producer Frank Spotnitz, and directed by Tony Wharmby. "Trust No 1" helps to explore the series' overarching mythology. The episode received a Nielsen household rating of 5.1 and was viewed by 8.4 million viewers; it garnered mixed to negative reviews from television critics, with many feeling that it portrayed the series' characters in a way that was unfaithful to the show's history.

Robert W. Goodwin, billed as R. W. Goodwin, is an Australian-born American television producer and director best known for his work as senior executive producer of The X-Files. He lives in Bellingham, Washington. 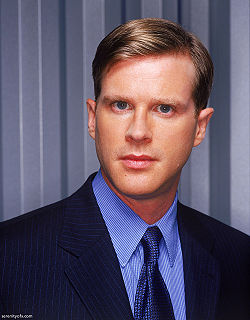 FBI Assistant Director Brad D. Follmer is a fictional character in the American Fox television series The X-Files, a science fiction series about a government conspiracy to hide or deny the truth of Alien existence. Follmer was introduced during the last season of the show, as an ex-lover to main character Monica Reyes. Follmer was portrayed by British actor Cary Elwes.

"Three Words" is the sixteenth episode of the eighth season of the science fiction television series The X-Files. It first aired in the United States and Canada on April 8, 2001, on Fox. It was written by executive producers Chris Carter and Frank Spotnitz, and directed by Tony Wharmby. The episode explores the series' overarching mythology and earned a Nielsen rating of 7.6 and was viewed by 7.77 million households, receiving mixed to positive reviews from television critics.

Rod Hardy is an Australian television and film director.

Milan Cheylov is a Canadian television director/producer. A professional stage actor at 15, Cheylov ran Bootleg Theatre in Toronto for ten years. He acted in theatre, television and film for almost twenty years. He started producing and directing short films and television shows in his mid-twenties. Cheylov moved to LA in 2006 to direct the Emmy-Award-winning action drama "24", among many others. He has directed over 150 episodes of television, from drama to comedy. He was Co-Executive producer on Fox TV's "Rosewood", and most recently was Co-Executive Producer on ABC's "Station 19". Cheylov is married to NY Times-bestselling author Lori Lansens. They have two children and live in Los Angeles.

Kenneth "Ken" Horton is a television producer, and occasional writer and director, having worked on Dallas, The X-Files, Millennium and Smallville. He was twice nominated for the Emmy Award for outstanding drama series for his work on The X-Files.

Tony Krantz is an American film and television producer, writer, and director. Krantz started his career in the American entertainment industry as an agent, spending 15 years at Creative Artists Agency (CAA). He started there as a mailroom trainee and rose to eventually run the primetime television department, where he personally packaged the television series ER, Twin Peaks,Beverly Hills, 90210, Melrose Place and The West Wing, among many others. He also put together the movies The Doors and Wild at Heart. Under his leadership at CAA, there were 32 shows on the primetime lineup that the agency represented when Krantz left to start the next part of his career. Krantz transitioned into producing television, and was one of three founders of Imagine Television, serving as its Co-Chairman and CEO. There he produced Felicity, Sports Night, The PJs, 24 and the movie Mulholland Drive. Krantz left Imagine in 2002 to pursue his path as a film and television director and writer. He has since directed three films, Sublime, Otis, and The Big Bang, and is currently the principal and owner of the independent production company Flame Ventures.