Toongabbie may refer to: 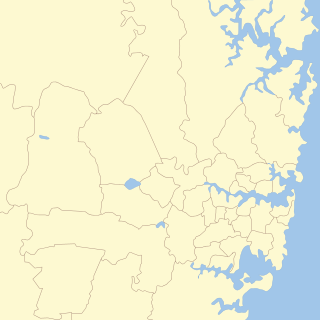 The Hills District is located in the north-western suburbs of Sydney, in the state of New South Wales, Australia. Stretching from the M2 Hills Motorway in the south to the Hawkesbury River in the north and Old Windsor Road in the West to the Lane Cove River in the East, its constituent suburbs are located in the local government areas of The Hills Shire and the Hornsby Shire.

Toongabbie is a suburb of Sydney, in the state of New South Wales, Australia. One of the oldest suburbs in Sydney, Toongabbie is located 30 kilometres west of the Sydney central business district and is part of the Greater Western Sydney region. Toongabbie is split between the local government areas of the City of Parramatta, the City of Blacktown and Cumberland Council. The suburb is often locally referred to as "Toonie" and "Toonga Bay".

The Division of Greenway is an Australian electoral division in the state of New South Wales. 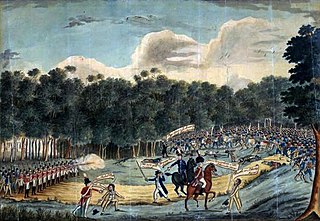 The Castle Hill rebellion of 1804 was a rebellion by convicts against colonial authority of the British colony of New South Wales in the Castle Hill area, in Sydney. The rebellion culminated in a battle fought between convicts and the colonial forces of Australia on 5 March 1804 at Rouse Hill, dubbed the Second Battle of Vinegar Hill after the first Battle of Vinegar Hill which had taken place in 1798 in Ireland. It was the first and only major convict uprising in Australian history suppressed under martial law.

Toongabbie railway station is located on the Main Western line, serving the Sydney suburb of Toongabbie. It is served by Sydney Trains T1 Western and T5 Cumberland line services.

Old Toongabbie is a suburb of Greater Western Sydney, in the state of New South Wales, Australia 29 kilometres west of the Sydney central business district in the local government area of the City of Parramatta.

Wentworthville was an electoral district of the Legislative Assembly in the Australian state of New South Wales, first created in 1962. The seat was absorbed into surrounding electorates in a redistribution prior to the 1991 election and recreated in the redistribution prior to the 1999 election. At the 2003 election, Pam Allan won the seat with 54% of the first preference votes. This was a marginal improvement over the 1999 election. It was abolished again for the 2007 election, with the larger part of it going to the new electoral district of Toongabbie.

The following lists events that happened during 1802 in Australia. 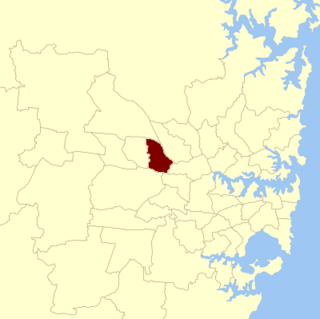 Toongabbie was an electoral district of the Legislative Assembly in the Australian state of New South Wales, created at the 2004 redistribution of electoral districts largely replacing the abolished district of Wentworthville. It was contested for the first time in the 2007 general election and abolished in the 2013 redistribution, largely replaced by Seven Hills. Its only member was the former Premier of New South Wales Nathan Rees from the Labor Party. 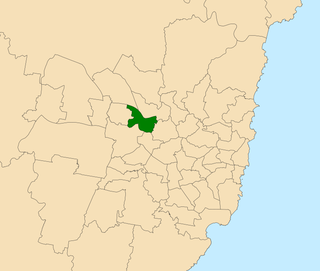 Seven Hills is an electoral district of the Legislative Assembly in the Australian state of New South Wales. It is represented by Mark Taylor of the Liberal Party. 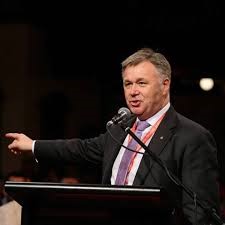 Michael Stanley "Mick" Veitch is an Australian politician and Labor Party member of the New South Wales Legislative Council. Veitch has been a member of the Council since 24 March 2007.

This is a list of electoral results for the Electoral district of Toongabbie in New South Wales state elections from the district's first election in 2007 until the present.

Toongabbie Creek, an urban watercourse that is part of the Parramatta River catchment, is located in Greater Western Sydney, New South Wales, Australia.

The Darling Mills Creek, an urban watercourse that is part of the Parramatta River catchment, is located in Greater Western Sydney, New South Wales, Australia.

Mark Owen Taylor is an Australian politician. He has been a Liberal Party member of the New South Wales Legislative Assembly since March 2015, representing the electorate of Seven Hills. He was previously a councillor of The Hills Shire.

Nathan Milone is an Italy international rugby league footballer who plays as a centre for the Wentworthville Magpies in the Intrust Super Premiership.

The Windsor Road cycleway is a predominately off-road 31-kilometre-long (19 mi) cyclepath between Parramatta Park and Macquarie Street, Windsor that is generally aligned with the Windsor Road and Old Windsor Road.

The Toongabbie Government Farm Archaeological Site is the heritage-listed site of a former convict government farm at Goliath Avenue, Winston Hills, City of Parramatta, New South Wales, Australia. The farm was built by convict labour from 1791 to 1813. Its site includes areas today known as Palestine Park, Oakes Reserve and Settlers Walk and is also known as the Toongabbie Government Farm Convict Site. It was added to the New South Wales State Heritage Register on 11 December 2012.