Top of the Mark (horse)

Top of the Mark is an American Saddlebred horse who won the Five-Gaited World's Grand Championship in 2016 and 2017. He was named a Horse of Honor by the United States Equestrian Federation in 2016.

The American Saddlebred is a horse breed from the United States. This breed was referred to as the "Horse America Made". Descended from riding-type horses bred at the time of the American Revolution, the American Saddlebred includes the Narragansett Pacer, Canadian Pacer, Morgan and Thoroughbred among its ancestors. Developed into its modern type in Kentucky, it was once known as the "Kentucky Saddler", and used extensively as an officer's mount in the American Civil War. In 1891, a breed registry was formed in the United States. Throughout the 20th century, the breed's popularity continued to grow in the United States, and exports began to South Africa and Great Britain. Since the formation of the US registry, almost 250,000 American Saddlebreds have been registered, and can now be found in countries around the world, with separate breed registries established in Great Britain, Australia, continental Europe, and southern Africa.

Chestnut is a colour, a medium reddish shade of brown, and is named after the nut of the chestnut tree. An alternate name for the colour is badious.

The American Saddlebred Horse Association is the oldest horse breed registry for an American breed in the United States. It was founded in 1891 and is headquartered at the Kentucky Horse Park in Lexington, Kentucky.

Mary Gaylord McClean is an American horse breeder, horse owner and exhibitor, businesswoman and philanthropist. McClean owns and shows American Saddlebred horses and Hackney ponies, on which she has won multiple Championships. Many of her philanthropic ventures are horse-related.

Wing Commander (1943–1969) was an American Saddlebred show horse out of the mare Flirtation Walk and by the stallion Anacacho Shamrock. Wing Commander was a chestnut with four white socks and a white star on his forehead. He was trained to be a five-gaited horse, meaning he performed the walk, trot, canter, slow gait and rack. Through both sides of his pedigree, Wing Commander traced back to the highly influential Saddlebred stallions Rex McDonald and Bourbon King, who were themselves successful show horses. In 1948, the stallion won his first Five-Gaited World Grand Championship, a title he kept for a total of six years. In total he won 6 Five-Gaited World Grand Championships, and was the first of only two horses to accomplish this. In 1950 Life magazine featured Wing Commander as an example of a fine athlete and an American Idol. He was owned by Dodge Stables, and trained and ridden by Earl Teater. Wing Commander stood at stud at Castleton Farm in Lexington, Kentucky, and died at the age of 29. 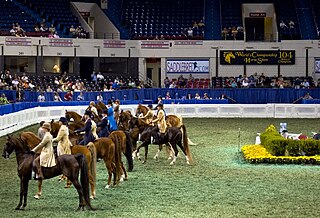 My-My (1957-1968) was an American Saddlebred mare. She was one of only two horses ever to win six Five-Gaited World's Grand Championships in the World's Championship Horse Show.

A Celebration of Horses: The American Saddlebred was a half-hour television special about the American Saddlebred horse breed. As a pilot episode, it was scheduled for four national releases from November 1993 to October 1995 on the Public Broadcasting Service (PBS) in the United States on 56 regional affiliates, and was also broadcast into Canada. The program starred actor and horse enthusiast William Shatner. Most of the segments were taped on location with Shatner at his Belle Reve Farm, and at the Lexington Junior League Horse Show in Lexington, Kentucky.

Sultan's Great Day was a black American Saddlebred stallion sired by Supreme Sultan, out of the mare Supremes Cassandra. Great Day, as he was commonly called, was a twice World's Champion Fine Harness Stallion. In his debut performance, he earned the title 1983 2-year-old World's Champion fine harness stallion. Other prestigious wins followed during his 2 and 3 year old years. He was retired to stud at the age of 4, but was shown a few more times in later years. Great Day was referred to as "one of the most prolific sires of world’s champions throughout the 1990s". He sired 387 registered offspring of which 106 were ribbon winners, 63 were futurity ribbon winners, and 24 went on to become champions in their respective disciplines.

Rex McDonald was an American Saddlebred stallion. He was only beaten three times in his show career and had an influential career as a sire.

Bourbon King was an American Saddlebred stallion. He was known for being the founding sire of the popular Chief family of Saddlebreds.

Elisabeth Goth is a horse breeder, horse exhibitor, and businesswoman. She owns Visser Stables in Kentucky and raises, shows and sells American Saddlebreds. She has won multiple awards and Championships in the horse industry. She is the vice president of the United States Equestrian Federation.

Boucheron was an American Saddlebred horse who won the Five-Gaited World's Grand Championship in 2004, the same year he won the five-gaited stake classes in the Lexington Junior League and American Royal Horse Shows, making him a Saddlebred Triple Crown winner.

Michele Macfarlane is a horse trainer from the United States, who competes in the sport of saddle seat. She has been one of the leading trainers and riders in the sport for over 40 years. Macfarlane resides in San Diego, California and is Marshal at Scripps Miramar Ranch.