Last updated August 19, 2020
This article is about the Spanish municipality. For other uses, see Topas (disambiguation).
Municipality in Castile and León, Spain

Topas is a municipality located in the province of Salamanca, Castile and León, Spain. As of 2016 the municipality has a population of 554 inhabitants.

Topa Inca Yupanqui or Túpac Inca Yupanqui, translated as "noble Inca accountant," was the tenth Sapa Inca (1471–93) of the Inca Empire, fifth of the Hanan dynasty. His father was Pachacuti, and his son was Huayna Capac. Topa Inca belonged to the Qhapaq panaca. His wife was his older sister, Mama Ocllo.

Topa is a census town in Hazaribag district in the Indian state of Jharkhand.

Durbach is a municipality in the district of Ortenau in Baden-Württemberg in Germany. It is situated on the verge of the northern Black Forest Mountains six kilometers north east of the town of Offenburg.

Ventura County Council of the Boy Scouts of America was officially chartered as Council 57 on June 23, 1921, after a series of meetings that followed a proposal put forward at a County Chamber of Commerce meeting on March 28, 1921, in the Masonic Hall. Mr. C. H. Whipple, then of Moorpark and later Oxnard, became the president; and Col. J.L. Howland became commissioner. Harvey R. Cheesman, an assistant scout executive in the Los Angeles Council, became the first Scout Executive, assuming his duties on July 11).

Topa is a village in Mendhar Tehsil, Poonch district in the Indian union territory of Jammu and Kashmir.

Topas is a municipality located in the province of Salamanca, Castile and León, Spain 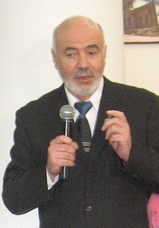 Iurie Colesnic is a technical literature corrector, former publishing director, literary historian, politician and writer of the Republic of Moldova.

Pains is a bairro in the District of Pains in the municipality of Santa Maria, in the Brazilian state of Rio Grande do Sul. It is located in southest Santa Maria.

The E75 Expressway or Murree Expressway is a partially operational controlled-access expressway linking Islamabad to Murree in Punjab province. The second section between Murree and Muzaffarabad, Azad Jammu and Kashmir is currently under construction.

SS Robert F. Burns was a Liberty ship built in the United States during World War II. She was named after Robert F. Burns, a Merchant marine killed when U-66 torpedoed Topa Topa, 350 mi (560 km) off North of Cayenne, French Guiana, 29 August 1942.