Tope Ademiluyi (born August 23, 1965) is a Nigerian politician from Aramoko-Ekiti, Ekiti-West, Ekiti State. [1] He assumed the position of acting governor in Ekiti State on April 27, 2007, and succeeded Tunji Olurin, the previous acting governor. [1] Ademiluyi held that position until 29 May 2007, when Olusegun Oni took office.

Ekiti State is in Southwest region of Nigeria, declared a state on 1 October 1996 alongside five other states in the country by the then military government under head of state, General Sani Abacha. As one of the newest states of the Nigerian federation, it was carved out of the territory of old Ondo State, and covers the former 12 local government areas that made up the Ekiti Zone of old Ondo State. On creation, it had 16 Local Government Areas (LGAs), having had an additional four carved out of the old ones. Ekiti State is one of the 36 states that constitute Nigeria and is reputed to have produced the highest number of professors in the country. With a single town in Ekiti State, Okemesi, reputed to have over 30 professors, several pioneer academics also hail from the state, including Adegoke Olubummo and Ekundayo Adeyinka Adeyemi. Other professors from the state include J. F. Ade Ajayi, Niyi Osundare, Sam Aluko and Prof A. A. Agboola.

Adetunji Idowu Ishola Olurin mni is a retired one-star general in the Nigerian Army who was a former military Governor of Oyo State and Field Commander of ECOMOG Peacekeeping Force in Liberia from 1992 to 1993 during the First Liberian Civil War. Olurin retired from service in 1993 and he is a member of People's Democratic Party (PDP) in Nigeria. He was administrator of Ekiti State from October 8, 2006 until April 27, 2007.

Ekiti State University Ado Ekiti (EKSU) was established as Obafemi Awolowo University, Ado-Ekiti on 30 March 1982 by the administration of late Chief Michael Adekunle Ajasin, the first civilian governor of Ondo State. The university is a member of the Association of Commonwealth Universities. It is located about 12 minutes drive from the center of the city of Ado-Ekiti, Ekiti State in Western Nigeria.

Omoba Ọlagunsoye Oyinlọla became governor of Osun State in Nigeria in May 2003, and was reelected in 2007. He was a member of the ruling People's Democratic Party (PDP). On 26 November 2010 a court of appeals nullified his election. He later defected to the APC shortly before the 2014 Osun State governorship election.

Peter Ayodele Fayose, is a Nigerian politician and the former Governor of Ekiti State.

The Action Congress of Nigeria (ACN), formerly known as Action Congress (AC), was a Nigerian political party formed via the merger of a faction of Alliance for Democracy, the Justice Party, the Advance Congress of Democrats, and several other minor political parties in September 2006. The party controlled Lagos. It was regarded as a natural successor to the progressive politics more closely associated with the Action Group and Unity Party of Nigeria (UPN) led by Chief Obafemi Awolowo in the First and Second Republics respectively. However, criticism of the party's more pragmatic and less ideological political outlook associated with AG and UPN, has made many argue it was less of a worthy political heir. The Party had strong presence in the South West, Mid-West and North Central Regions. Lagos, Edo, Ekiti, Kogi, Ondo, Bauchi, Plateau, Niger, Adamawa, Oyo and Osun states by far accounts for majority of the party's presence and discernible power base.

Olusegun Oni, also known as Segun Oni, is a Nigerian politician and a former Governor of Ekiti State of Nigeria since 29 May 2007. He was a member of the ruling People's Democratic Party (PDP). In 2014 he defected from the PDP and joined the newly formed opposition party All Progressive Congress (APC). He currently holds the position of Deputy National Chairman South.

Sylvester Ayodele Arise is a Nigerian senator who represents the People's Democratic Party (PDP) in Ekiti State. He became a member of the Nigerian Senate in 2007.

Colonel Ahmed Usman was a Nigerian Military Administrator of Ondo State and then of Oyo State during the military regime of General Sani Abacha.

Colonel (retired) Mohammed Inua Bawa was appointed the Administrator of Ekiti State, Nigeria during the military regime of General Sani Abacha. He was then appointed Administrator of Gombe State from August 1998 to May 1999, handing over to the elected civilian governor at the start of the Nigerian Fourth Republic.

Navy Captain (retired) Musbau Atanda Yusuf was appointed the Administrator of Ekiti State, Nigeria during the transitional regime of General Abdulsalami Abubakar, handing over to the elected civilian governor at the start of the Nigerian Fourth Republic on 29 May 1999. 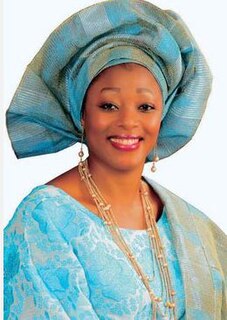 Olufunmilayo Aduni Olayinka, née Famuagun , was a Nigerian banker and politician who served as the Deputy Governor of Ekiti State.

The Nigerian state governors 2011–2015 term formally begins in May 2011 for the 26 state Governors in Nigeria elected in April 2011. In the 10 other states, elections were delayed until the current incumbent had served their full term. Governors are normally elected for a four-year term during the national elections in which the President and members of the upper and lower house are also elected, as are the state legislators. In some cases, the first officeholder may be replaced by another, for example through death, impeachment or if an election is annulled. 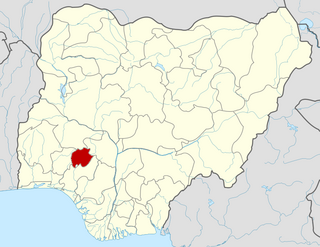 The Ekiti prison break was an attack on the federal prison at Afao road, Ado Ekiti in the southwestern Nigerian city of Ekiti State by 60 unknown gunmen. The attack occurred on 30 November 2014. 341 prisoners escaped from the prison leaving 1 warder and 20 sniffer dogs dead. The escaped prisoners were largely awaiting trial. 10 inmates who attempted to escaped was captured during the attack at gunfire exchange between the policemen and the gunmen. 67 inmates were rearrested after the attack and 274 inmates escaped. One inmate, who claimed to have run away when he heard gunshots, returned to the prison to serve out his short sentence.

Abiodun Christine Olujimi is a Nigerian politician. She is a senator of the Federal Republic Nigeria representing Ekiti South constituency and minority leader of the Nigerian Senate. She is known for her courage in politics, grass root governance and her contributions in the Nigerian Telecommunication industry where she was a board member of Nigerian Communications Commission.