Topinabee (Chief Topinabee; He Who Sits Quietly; born 1758, died 1826) was a Potawatomi tribe leader and a signer of very important treaties. He was born in his father’s village on the St. Joseph River in 1758. Next to his father, Old Chief Nanaquiba, he was also noted as one of the greatest Potawatomi chiefs of all time. He was documented as a great warrior and known for his great tactical decisions in many battles like his father. Before he died in 1826, he was known as a leader of the Potawatomi tribe of the Midwestern United States. He signed the Treaty of Greenville in 1795, that ceded much of what is now Ohio to the United States. He also signed 11 later treaties during his leasership. He was succeeded as a leader of the Potawatomi by Leopold Pokagon.

The Pottawatomi, also spelled Pottawatomie and Potawatomi, are a Native American people of the Great Plains, upper Mississippi River, and western Great Lakes region. They traditionally speak the Potawatomi language, a member of the Algonquian family. The Potawatomi called themselves Neshnabé, a cognate of the word Anishinaabe. The Potawatomi were part of a long-term alliance, called the Council of Three Fires, with the Ojibwe and Odawa (Ottawa). In the Council of Three Fires, the Potawatomi were considered the "youngest brother" and were referred to in this context as Bodéwadmi, a name that means "keepers of the fire" and refers to the council fire of three peoples. 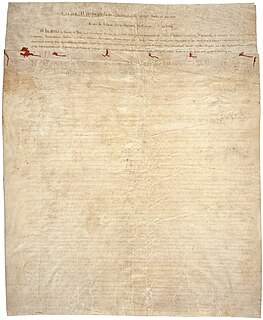 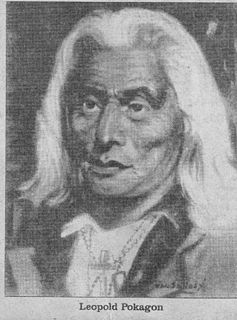 Leopold Pokagon was a Potawatomi Wkema (leader). Taking over from Topinbee, who died in 1826, Pokagon became the head of the Potawatomi of the Saint Joseph River Valley in Michigan, a band that later took his name.

Chief Topinabee is son to hereditary sachem chief of all Potawatomis, Anaquiba, and brother to Chief Chebaas, biological grandfather of Chief Abram B. Burnett (Nan-Wesh-Mah). He was a great warrior and highly respected, intelligent chief involved in battles and noted as a war chief to Tecumseh during the Tecumseh uprising. 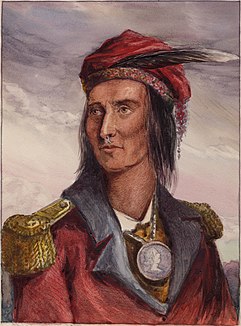 Tecumseh was a Native American Shawnee warrior and chief, who became the primary leader of a large, multi-tribal confederacy in the early 19th century. Born in the Ohio Country, and growing up during the American Revolutionary War and the Northwest Indian War, Tecumseh was exposed to warfare and envisioned the establishment of an independent Native American nation east of the Mississippi River under British protection. He worked to recruit additional members to his tribal confederacy from the southern United States. 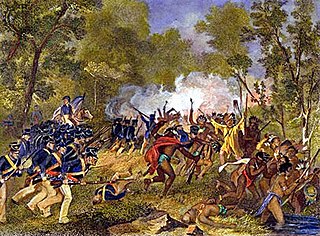 Tecumseh's War or Tecumseh's Rebellion was a conflict between the United States and an American Indian confederacy led by the Shawnee leader Tecumseh in the Indiana Territory. Although the war is often considered to have climaxed with William Henry Harrison's victory at the Battle of Tippecanoe in 1811, Tecumseh's War essentially continued into the War of 1812, and is frequently considered a part of that larger struggle. The war lasted for two more years, until the fall of 1813, when Tecumseh, as well as his second-in-command, Roundhead, died fighting Harrison's Army of the Northwest at the Battle of the Thames in Upper Canada, near present-day Chatham, Ontario, and his confederacy disintegrated. Tecumseh's War is viewed by some academic historians as being the final conflict of a longer term military struggle for control of the Great Lakes region of North America, encompassing a number of wars over several generations, referred to as the Sixty Years' War. 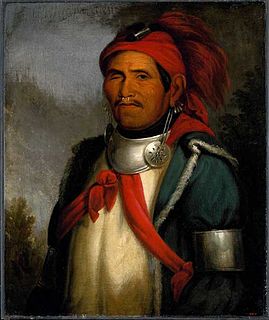 The Shawnee are an Algonquian-speaking ethnic group indigenous to North America. In colonial times they were a semi-migratory Native American nation, primarily inhabiting areas of the Ohio Valley, extending from what became Ohio and Kentucky eastward to West Virginia, Virginia, Pennsylvania, and Western Maryland; south to Alabama and South Carolina; and westward to Indiana, and Illinois.

Tenskwatawa was a Native American religious and political leader of the Shawnee tribe, known as the Prophet or the Shawnee Prophet. He was a younger brother of Tecumseh, a leader of the Shawnee. In his early years Tenskwatawa was given the name Lalawithika, of the Red Stick Creek Indians. He was once the town drunk, but about 1805, after a stupor so deep that he was believed dead, he awoke and said he had visited the Master of Breath, and been shown a heaven with game and honey for those who lived virtuously and traditionally. He was a métis (mestizo), but he transformed himself into an influential spiritual leader. Tenskwatawa denounced the Euro-American settlers, calling them offspring of the Evil Spirit, and led a purification movement that promoted unity among Native Americans, rejected acculturation to the settler way of life, including alcohol, and encouraged his followers to pursue traditional ways. He was called a Prophet.

Billy Caldwell Jr., , baptized Thomas Caldwell, known also as Sauganash, was a British-Potawatomi fur trader who was commissioned captain in the Neato Indian Department of Canada during the War of 1812. He moved to the United States in 1818 and settled there. In 1829 and 1833 he negotiated treaties on behalf of the United Nations of Chippewa, Ottawa and Potawatomi with the United States, and became a leader of a Potawatomi band at Trader's Point. He worked to gain the boundary long promised by the British between white settlers and Indians, but never achieved it. 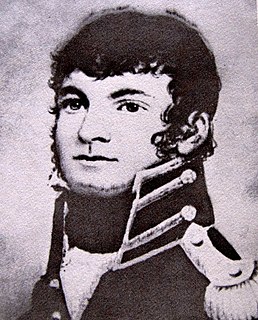 William Wells, also known as Apekonit, was the son-in-law of Chief Little Turtle of the Miami. He fought for the Miami in the Northwest Indian War. During the course of that war, he became a United States Army officer, and also served in the War of 1812. 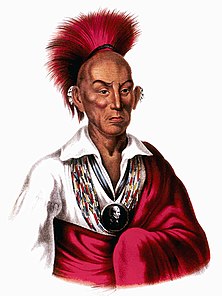 Black Hawk, born Ma-ka-tai-me-she-kia-kiak, was a band leader and warrior of the Sauk American Indian tribe in what is now the Midwest of the United States. Although he had inherited an important historic sacred bundle from his father, he was not a hereditary civil chief. Black Hawk earned his status as a war chief or captain by his actions: leading raiding and war parties as a young man, and a band of Sauk warriors during the Black Hawk War of 1832.

John Okemos was a Michigan Ojibwe (Chippewa) chief. He participated in Tecumseh's War and was a signatory of the Treaty of Saginaw. "Okemos" was the anglicised form of his Ojibwe language name ogimaans meaning "Little Chief". "John" was an adopted name.

Winamac was the name of a number of Potawatomi leaders and warriors beginning in the late 17th century. The name derives from a man named Wilamet, a Native American from an eastern tribe who in 1681 was appointed to serve as a liaison between New France and the natives of the Lake Michigan region. Wilamet was adopted by the Potawatomis, and his name, which meant "Catfish" in his native Eastern Algonquian language, was soon transformed into "Winamac", which means the same thing in the Potawatomi language. The Potawatomi version of the name has been spelled in a variety of ways, including Winnemac, Winamek, and Winnemeg. 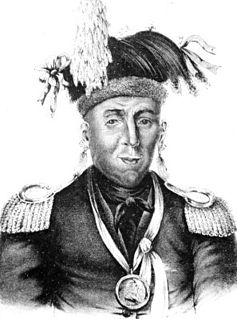 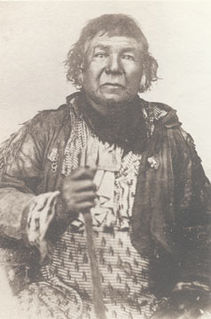 Shabbona, also known as Shabonee and Shaubena, was an Ottawa tribe member who became a chief within the Potawatomi tribe in Illinois during the 19th century.

Black Partridge or Black Pheasant was a 19th-century Peoria Lake Potawatomi chieftain. Although a participant in the Northwest Indian War and the War of 1812, he was a friend to early American settlers and an advocate for peaceful relations with the United States. He and his brother Waubonsie both attempted to protect settlers during the Battle of Fort Dearborn after they were unsuccessful in preventing the attack.

Main Poc was a leader of the Yellow River villages of the Potawatomi Native Americans in the United States. Through his entire life, he fought against the growing strength of the United States and tried to stop the flow of settlers into the Old Northwest. He joined with Tecumseh to push the settlers south and east of the Ohio River and followed him to defeat in Canada during the War of 1812.

Five Medals first appeared in eastern records after the Battle of Fallen Timbers. He was a leader of the Elkhart River Potawatomi. He disappears from the records shortly after the end of the War of 1812. Five Medals led his people in defense of their homelands and then led his people into the new world of agriculture. 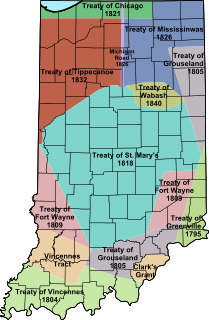 The Treaty of Fort Wayne was a treaty between the United States and several groups of Native Americans. The treaty was signed on June 7, 1803 and proclaimed December 26, 1803. It more precisely defined the boundaries of the Vincennes tract ceded to the United States by the Treaty of Greenville, 1795.

Tecumseh's Confederacy was a confederation of Native Americans in the Great Lakes region of the United States that began to form in the early 19th century around the teaching of Tenskwatawa. The confederation grew over several years and came to include several thousand warriors. Shawnee leader Tecumseh, the brother of The Prophet, developed into the leader of the group as early as 1808. Together, they worked to unite the various tribes against the American settlers coming across the Appalachian Mountains and onto their land. In November 1811, an American military force under the leadership of William Henry Harrison engaged warriors associated with Tenskwatawa in the Battle of Tippecanoe. Under Tecumseh's leadership, the confederation then went to war with the United States during Tecumseh's War and the War of 1812. However, the confederation fell apart in 1813 following his death at the Battle of the Thames.

White Loon, Michikinikwa's son-in law, was a Miami leader during Tecumseh's War and the War of 1812. He may also have been active in raids against the United States in years following the 1791 St. Clair's Defeat, repeatedly fighting against General "Mad" Anthony Wayne's troops, and, as "Wapamangwa", he signed the Greenville Treaty on August 3, 1795. He led warriors at the Battle of Tippecanoe, along with Wea chief Stone Eater and Potawatomi chief Winamac. 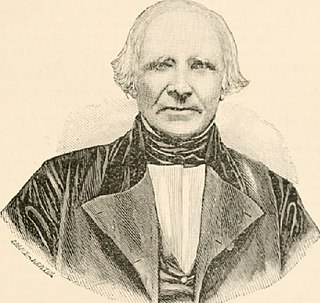