Tops 'N' Toys was a Canadian toy retailer chain. The chain included a location in Calgary's Marlborough Mall. The chain had difficulty competing in the market, and disappeared in the 1990s. [1]

Ed Shaben acquired the chain in 1990. While Shaben was later named to the Canadian Toy Industry Hall of Fame, he nonetheless could not make the chain profitable, and he retired from the business in 1992. [1]

Zellers was a Canadian chain discount department retailer that was based in Brampton, Ontario. It was founded in 1931 and was acquired by Hudson's Bay Company (HBC) in 1978.

Dollarama is a Canadian dollar store retail chain headquartered in Montreal. Since 2009, it is now Canada's largest retailer of items for four dollars or less. Dollarama has over 1000 stores and has a presence in every province of Canada; Ontario has the most stores.

A "Happy Meal" is a kids' meal usually sold at the American fast food restaurant chain McDonald's since June 1979. A small toy is included with the food, both of which are usually contained in a red cardboard box with a yellow smiley face and the McDonald's logo. The packaging and toy are frequently part of a marketing tie-in to an existing television series, film or toyline.

My Little Pony (MLP) is a toy line and media franchise mainly targeting girls, developed by American toy company Hasbro. The first toys were developed by Bonnie Zacherle, Charles Muenchinger, and Steve D'Aguanno, and were produced in 1981. The ponies feature colorful bodies, manes and a unique symbol on one or both sides of their flanks. Such symbols are referred to in the two most recent incarnations as "cutie marks". My Little Pony has been revamped several times with new and more modern looks to continue its appeal to the market.

Toys "R" Us is an international toy, clothing, and baby product retailer owned by Tru Kids, Inc. and various others. It was founded in April 1948, with its headquarters located in Wayne, New Jersey, in the New York metropolitan area.

Big Lots, Inc. is an American retail company headquartered in Columbus, Ohio with over 1,400 stores in 47 states. 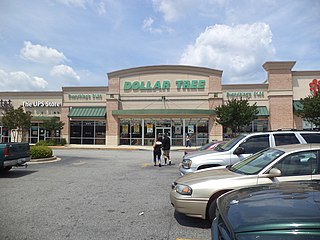 Dollar Tree, Inc., formerly known as Only $1.00, is an American chain of discount variety stores that sells items for $1 or less. Headquartered in Chesapeake, Virginia, it is a Fortune 500 company and operates 15,115 stores throughout the 48 contiguous U.S. states and Canada. Its stores are supported by a nationwide logistics network of twenty four distribution centers. The company operates one-dollar stores under the names of Dollar Tree and Dollar Bills. The company also operates a multi-price-point variety chain under the Family Dollar banner.

Days Inn is a hotel chain headquartered in the United States. It was founded in 1970 by Cecil B. Day, who opened the first location in Tybee Island, Georgia. The brand is now a part of the Wyndham Hotels and Resorts, headquartered in Parsippany, New Jersey, which used to be a part of Cendant. As of December 31, 2018, Days Inn includes 1,728 locations worldwide with 137,678 rooms.

Party City is an American publicly traded retail chain of party stores founded in 1986 by Steve Mandell in East Hanover, New Jersey. Based in Elmsford, New York, the company is the largest retailer of party goods in the United States, Canada and Mexico, operating over 900 company-owned and franchise outlets under the Party City, Halloween City, Toy City, and Factory Card & Party Outlet brands.

The Early Learning Centre (ELC) is a British retailer that sell toys aimed at younger children. It is part of The Entertainer. It was a Subsidiary of Mothercare until 2019.

Glo Worm is a stuffed toy for young children, designed by Hasbro's Playskool division, and made in Pawtucket, Rhode Island. Introduced in 1982, the plush, pajamaed worm body contained a battery-powered device that when squeezed would light up the toy's vinyl head from within, creating a soft glow. The original toy, upon release, was such a success that Hasbro released a new Musical Glo Worm toy, a series of story books, night lights, videos and other merchandise that continued until the early 1990s. However, in late 2005, the product was criticized for harming children; its plastic head was softened with phthalates, which can be dangerous if swallowed by children.

Steinberg's was a large family-owned Canadian grocery store chain that mainly operated in the province of Quebec and later Ontario. In addition to its flagship supermarket chain, the company operated several subsidiaries across the country. The company went bankrupt in 1992, three years after being sold to private interests, after 75 years in business.

Lawrence "Larry" Ralph Shaben was a Canadian politician of Lebanese descent and the first Muslim Cabinet Minister in Canada. He was also one of the first Muslims to be elected to higher office in North America. He held a seat in the Legislative Assembly of Alberta from 1975 to 1989 sitting with the governing Progressive Conservative Caucus. During his time in office he served as a cabinet minister in the governments of Premier Peter Lougheed and Don Getty occupying various portfolios from 1979 to 1989.

Endiang, Alberta is a hamlet in Alberta, Canada within the County of Stettler No. 6. It is located approximately 80 kilometres (50 mi) southeast of Stettler, Alberta.

Child World was an American chain of toy stores founded by Sid Shneider and Joseph Arnesano in Quincy, Massachusetts, in 1962. Child World once had 182 stores and revenues of approximately $830 million annually. From 1977 until its closure Child World also operated the Children's Palace chain of stores after acquiring it from Kobacker Stores, and later incorporated most of the aesthetic design features from the latter chain into Child World stores.

Mega Brands Inc., formerly known as Mega Bloks Inc. and Ritvik Holdings, is a Canadian children's toy company currently owned by Mattel. Mega Bloks, a line of construction set toys, is its most popular product. Its other brands include Mega Construx, Mega Puzzles, Board Dudes and Rose Art. The company distributes a wide range of construction toys, puzzles, and craft-based products.

Rossy is a Canadian regional chain of variety stores located primarily in the provinces of Quebec, Newfoundland, New Brunswick and Nova Scotia, Canada.

Mastermind LP, trading as Mastermind Toys, is a Canadian chain of toy stores. Based in Scarborough, Toronto, Ontario, the company was founded in 1984 by Andy and Jonathan Levy, and primarily sells children's toys and books, with an emphasis on educational products.