The Topsite Templating System is an open source templating system written in the Python programming language. It is designed to allow simple melding of Python code with static content.

Apart from allowing static content to be combined with Python code in a single file, the Topsite Templating System possesses other features, such as:

In computing, Common Gateway Interface (CGI) is an interface specification for web servers to execute programs like console applications running on a server that generates web pages dynamically. Such programs are known as CGI scripts or simply as CGIs. The specifics of how the script is executed by the server are determined by the server. In the common case, a CGI script executes at the time a request is made and generates HTML.

A quine is a computer program which takes no input and produces a copy of its own source code as its only output. The standard terms for these programs in the computability theory and computer science literature are "self-replicating programs", "self-reproducing programs", and "self-copying programs".

Zope is a family of free and open-source web application servers written in Python, and their associated online community. Zope stands for "Z Object Publishing Environment", and was the first system using the now common object publishing methodology for the Web. Zope has been called a Python killer app, an application that helped put Python in the spotlight.

In computer science, a preprocessor is a program that processes its input data to produce output that is used as input to another program. The output is said to be a preprocessed form of the input data, which is often used by some subsequent programs like compilers. The amount and kind of processing done depends on the nature of the preprocessor; some preprocessors are only capable of performing relatively simple textual substitutions and macro expansions, while others have the power of full-fledged programming languages.

A programming tool or software development tool is a computer program that software developers use to create, debug, maintain, or otherwise support other programs and applications. The term usually refers to relatively simple programs, that can be combined together to accomplish a task, much as one might use multiple hand tools to fix a physical object. The most basic tools are a source code editor and a compiler or interpreter, which are used ubiquitously and continuously. Other tools are used more or less depending on the language, development methodology, and individual engineer,often used for a discrete task, like a debugger or profiler. Tools may be discrete programs, executed separately – often from the command line – or may be parts of a single large program, called an integrated development environment (IDE). In many cases, particularly for simpler use, simple ad hoc techniques are used instead of a tool, such as print debugging instead of using a debugger, manual timing instead of a profiler, or tracking bugs in a text file or spreadsheet instead of a bug tracking system.

A web content management system is a software content management system (CMS) specifically for web content. It provides website authoring, collaboration, and administration tools that help users with little knowledge of web programming languages or markup languages create and manage website content. A WCMS provides the foundation for collaboration, providing users the ability to manage documents and output for multiple author editing and participation. Most systems use a content repository or a database to store page content, metadata, and other information assets the system needs.

CherryPy is an object-oriented web application framework using the Python programming language. It is designed for rapid development of web applications by wrapping the HTTP protocol but stays at a low level and does not offer much more than what is defined in RFC 7231.

Django is a Python-based free and open-source web framework that follows the model-template-views (MTV) architectural pattern. It is maintained by the Django Software Foundation (DSF), an American independent organization established as a 501(c)(3) non-profit.

eRuby is a templating system that embeds Ruby into a text document. It is often used to embed Ruby code in an HTML document, similar to ASP, JSP and PHP and other server-side scripting languages. The templating system of eRuby combines the ruby code and the plain text to provide flow control and variable substitution, thus making it easy to maintain.

Snippet is a programming term for a small region of re-usable source code, machine code, or text. Ordinarily, these are formally defined operative units to incorporate into larger programming modules. Snippet management is a feature of some text editors, program source code editors, IDEs, and related software. It allows the user to avoid repetitive typing in the course of routine edit operations.

A static web page is a web page that is delivered to the user's web browser exactly as stored, in contrast to dynamic web pages which are generated by a web application. 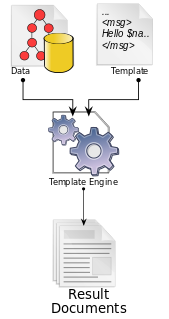 A template processor is software designed to combine templates with a data model to produce result documents. The language that the templates are written in is known as a template language or templating language. For purposes of this article, a result document is any kind of formatted output, including documents, web pages, or source code, either in whole or in fragments. A template engine is ordinarily included as a part of a web template system or application framework, and may be used also as a preprocessor or filter. 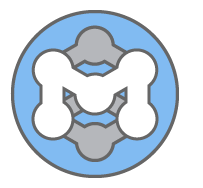 MoinMoin is a wiki engine implemented in Python, initially based on the PikiPiki wiki engine. Its name is a play on the North German greeting Moin, repeated as in WikiWiki. The MoinMoin code is licensed under the GNU General Public License v2, or any later version.

ASP.NET Web Forms is a web application framework and one of several programming models supported by the Microsoft ASP.NET technology. Web Forms applications can be written in any programming language which supports the Common Language Runtime, such as C# or Visual Basic. The main building blocks of Web Forms pages are server controls, which are reusable components responsible for rendering HTML markup and responding to events. A technique called view state is used to persist the state of server controls between normally stateless HTTP requests.