Tork or Torks may refer to:

People with the surname Tork

David "Dave" Tork is retired male pole vaulter from the United States. He set his personal best in the event on June 27, 1964 at a meet in New Brunswick, New Jersey.

Hanan Tork is an Egyptian former actress and former ballerina. She was born Hanan Hassan Muhammad Abd El Karim, and is sometimes credited as Hanane Tork and Hanan Turk. She is a sister to two brothers: Hussein and Hossam. Her father owned his own factory for clothes.

Peter Halsten Thorkelson, better known as Peter Tork, was an American musician, composer and actor, best known as the keyboardist and bass guitarist of the Monkees.

Tork Amir is a village in Itivand-e Jonubi Rural District, Kakavand District, Delfan County, Lorestan Province, Iran. At the 2006 census, its population was 51, in 12 families.

Tork Pikeh is a village in Sardasht Rural District, Sardasht District, Dezful County, Khuzestan Province, Iran. At the 2006 census, its existence was noted, but its population was not reported.

Tark is a city and capital of Kandovan District, in Meyaneh County, East Azerbaijan Province, Iran. At the 2011 census, its population was 2604, in 532 families. 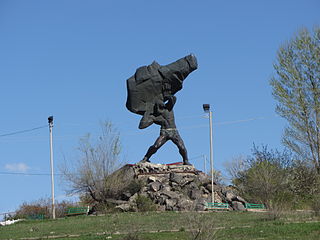 Tork Angegh was an ancient Armenian masculine deity of strength, courage, of manufacturing and the arts, also called Torq and Durq/Turq. A creature of unnatural strength and power, Tork was considered one of Hayk's great-grandsons and reportedly represented as an unattractive male figure. He is mentioned by Armenian 4th Century historian Movses Khorenatsi and considered one of the significant deities of the Armenian pantheon prior to the time when it came under influence by Iranian and Hellenic religion and mythology. Taken in the context of Proto-Indo-European religions, it is conceivable that an etymological connection with Norse god Thor/Tyr is more than a simple coincidence.

Tork: Prehistoric Punk is a platform video game released on January 12, 2005 for the Xbox video game console. It was developed by Tiwak and published by Ubisoft. The game was never released outside the United States.

Essity AB is a global hygiene and health company, with its headquarters in Stockholm, Sweden. The company develops, manufactures and sells products and solutions within hygiene and health. The products portfolio contains tissue paper, baby diapers, feminine care, incontinence products, compression therapy, orthopedics and wound care. Essity was a part of the hygiene and forest products company SCA until 2017, when the company spun off the hygiene operations that became listed as a separate company on Nasdaq Stockholm. Essity has approximately 48 000 employees and net sales in 2017 amounted to 11.3 billion euros. The name Essity stems from Essentials and Necessities.

A torc, also spelled torq or torque, is a large rigid or stiff neck ring in metal, made either as a single piece or from strands twisted together. The great majority are open at the front, although some had hook and ring closures and a few had mortice and tenon locking catches to close them. Many seem designed for near-permanent wear and would have been difficult to remove. Torcs are found in the Scythian, Illyrian, Thracian, Celtic, and other cultures of the European Iron Age from around the 8th century BC to the 3rd century AD. For the Iron Age Celts the gold torc seems to have been a key object, identifying the wearer as a person of high rank, and many of the finest works of ancient Celtic art are torcs. The Celtic torc disappears in the Migration Period, but during the Viking Age torc-style metal necklaces, now mainly in silver, came back into fashion. Torc styles of neck-ring are found as part of the jewellery styles of various other cultures and periods.

A torc is a large rigid or stiff neck ring in metal, made either as a single piece or from strands twisted together.

Torque, moment, or moment of force is the rotational equivalent of linear force. The concept originated with the studies of Archimedes on the usage of levers. Just as a linear force is a push or a pull, a torque can be thought of as a twist to an object. The symbol for torque is typically , the lowercase Greek letter tau. When being referred to as moment of force, it is commonly denoted by M.

Kalasha or Kalash may refer to:

Til may refer to:

A torque, in physics, is a vector that measures the tendency of a force to rotate an object about some axis.

Suma may refer to:

Lari is a suborder of birds.

Tark is a village in Khanandabil-e Gharbi Rural District, in the Central District of Khalkhal County, Ardabil Province, Iran. At the 2006 census, its population was 112, in 24 families.

Khanqah is a building for Sufi spiritual retreats.

Tarkeh Veys is a village in Qaleh Shahin Rural District, in the Central District of Sarpol-e Zahab County, Kermanshah Province, Iran. At the 2006 census, its population was 378, in 94 families.

Ilkhchi is a city in East Azerbaijan Province, Iran.

Tark-e Viran is a village in Hulasu Rural District, in the Central District of Shahin Dezh County, West Azerbaijan Province, Iran. At the 2006 census, its population was 267, in 49 families.

Tork Mahalleh is a village in Saheli-ye Jokandan Rural District, in the Central District of Talesh County, Gilan Province, Iran. At the 2006 census, its population was 317, in 69 families.