Torkan is a heroic fantasy comic strip written and illustrated by Roger Fletcher. The strip debuted in June 1976 in the Sunday Telegraph [1] and has appeared continuously in the paper to the present day, with over seventy stories having been published. 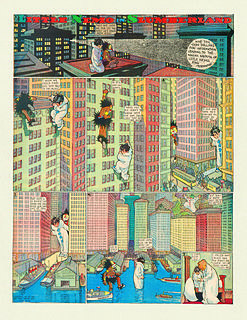 During the early 1970s, Fletcher began developing a comic strip about an Australian soldier-of-fortune, titled Nathan Cole—until he was introduced to the world of sword and sorcery by science-fiction writer Fritz Leiber that would have a profound impact on his future. In particular, the pair of characters called Fafhrd and the Gray Mouser influenced Fletcher greatly.

Fritz Reuter Leiber Jr. was an American writer of fantasy, horror, and science fiction. He was also a poet, actor in theater and films, playwright and chess expert. With writers such as Robert E. Howard and Michael Moorcock, Leiber can be regarded as one of the fathers of sword and sorcery fantasy, having coined the term. 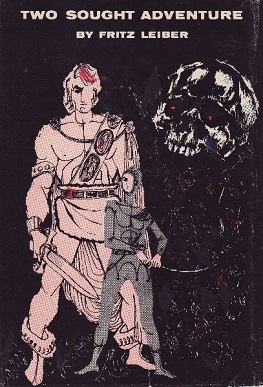 Fafhrd and the Gray Mouser are two sword-and-sorcery heroes appearing in stories written by American author Fritz Leiber. They are the protagonists of what are probably Leiber's best-known stories. One of his motives in writing them was to have a couple of fantasy heroes closer to true human nature than the likes of Howard's Conan the Barbarian or Burroughs's Tarzan.

Fletcher worked on a fantasy comic strip called Orn the Eagle Warrior in 1974, but the strip received no attention from publishers. Fletcher subsequently started drawing Torkan. [2]

Torkan continues to win new generations of readers; something which Fletcher believes is attributable to the character's enduring appeal. Fletcher claims; "the paradigm for heroic adventure was first written in the Bible, as David and Goliath. Whether it's in Arthurian legend or Harry Potter, the paradigm itself doesn't change much - but fashions do change."

Levels of violence in the stories have dropped since the strip's early years.

The Beano is the longest running British children's comic magazine, published by DC Thomson. The comic first appeared on 30 July 1938, and was published weekly. In September 2009, The Beano's 3,500th issue was published. One of the best selling comics in British popular culture, along with The Dandy, the weekly circulation of The Beano in April 1950 was 1,974,072. The Beano is currently edited by John Anderson. Each issue is published on a Wednesday, with the issue date being that of the following Saturday. The Beano will strike 4000 issues in the summer of 2019. 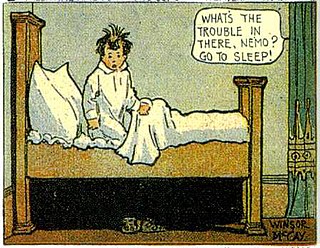 Little Nemo is a fictional character created by American cartoonist Winsor McCay. He originated in an early comic strip by McCay, Dream of the Rarebit Fiend, before receiving his own spin-off series, Little Nemo in Slumberland. The full-page weekly strip depicted Nemo having fantastic dreams that were interrupted by his awakening in the final panel. The strip is considered McCay's masterpiece for its experiments with the form of the comics page, its use of color, its timing and pacing, the size and shape of its panels, perspective, architectural and other detail. 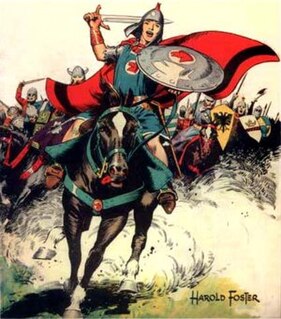 Prince Valiant in the Days of King Arthur, or simply Prince Valiant, is an American comic strip created by Hal Foster in 1937. It is an epic adventure that has told a continuous story during its entire history, and the full stretch of that story now totals more than 4000 Sunday strips. Currently, the strip appears weekly in more than 300 American newspapers, according to its distributor, King Features Syndicate. 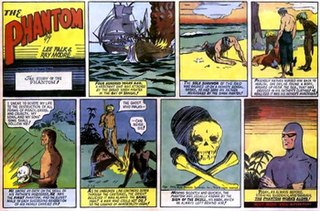 Minnie the Minx, whose real name is Hermione Makepeace, is a British comic strip and comic strip character published in the comic magazine The Beano. Created and originally drawn by Leo Baxendale, she first appeared in issue 596, dated 19 December 1953, but is generally considered as being permanently 13 years of age making her the third longest running Beano character, behind only Dennis the Menace and Roger the Dodger.

Mandrake the Magician was a syndicated newspaper comic strip, created by Lee Falk. Mandrake began publication on June 11, 1934. Phil Davis soon took over as the strip's illustrator, while Falk continued to script. The strip is distributed by King Features Syndicate.

Tricky Dicky was a British comic strip which debuted in the magazine Topper in 1977 and was drawn by John Dallas. From 1979 to 1986 he was the cover star of the comic, succeeding Danny's Tranny and preceding Beryl the Peril.

Alley Oop is a syndicated comic strip created in 1932 by American cartoonist V. T. Hamlin, who wrote and drew the strip through four decades for Newspaper Enterprise Association. Hamlin introduced a cast of characters, and his story lines entertained with a combination of adventure, fantasy, and humor. Alley Oop, the strip's title character, was a sturdy citizen in the prehistoric kingdom of Moo. He rode his pet dinosaur Dinny, carried a stone war hammer, and wore only a fur loincloth. He would rather fight dinosaurs in the jungle than deal with his fellow countrymen in Moo's capital and sole cave-town. Despite these exotic settings, the stories were often satires of American suburban life.

The Spirit is a fictional masked crimefighter created by cartoonist Will Eisner. He first appeared June 2, 1940, as the main feature of a 16-page, tabloid-sized, newsprint comic book insert distributed in the Sunday edition of Register and Tribune Syndicate newspapers; it was ultimately carried by 20 Sunday newspapers, with a combined circulation of five million copies during the 1940s. "The Spirit Section", as the insert was popularly known, continued until October 5, 1952. It generally included two other four-page strips, plus filler material. Eisner was the editor, but also wrote and drew most entries—after the first few months, he had the uncredited assistance of writer Jules Feiffer and artists Jack Cole and Wally Wood, though Eisner's singular vision for the strip was a unifying factor.

The Sunday comics or Sunday strip is the comic strip section carried in most western newspapers, almost always in color. Many newspaper readers called this section the Sunday funnies, the funny papers or simply the funnies. 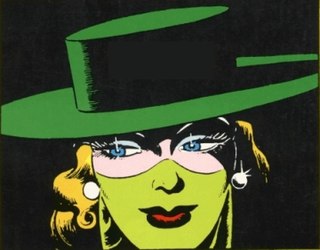 Lady Luck is a fictional, American comic-strip and comic book crime fighter and adventuress created and designed in 1940 by Will Eisner with artist Chuck Mazoujian. Through 1946, she starred in a namesake, four-page weekly feature published in a Sunday-newspaper comic-book insert colloquially called "The Spirit Section". The feature, which ran through November 3, 1946, with one months-long interruption, was reprinted in comic books published by Quality Comics. A revamped version of the character debuted in 2013 in DC Comics's Phantom Stranger comic.

The Eastern Color Printing Company was a company that published comic books, beginning in 1933. At first it was only newspaper comic strip reprints, but later on original material was published. Eastern Color Printing was incorporated in 1928, and soon became successful by printing color newspaper sections for several New England and New York papers. Eastern is most notable for its production of Funnies on Parade and Famous Funnies, two publications that gave birth to the American comic book industry.

Comic strip formats vary widely from publication to publication, so that the same newspaper comic strip may appear in a half-dozen different formats with different numbers of panels, different sizes of panels and different arrangement of panels. 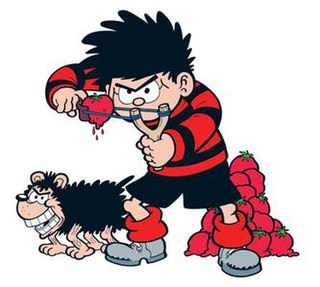 Dennis and Gnasher is a long-running comic strip in the British children's comic The Beano, published by DC Thomson, of Dundee, Scotland. The comic stars a boy named Dennis the Menace and his Abyssinian wire-haired tripe hound Gnasher.