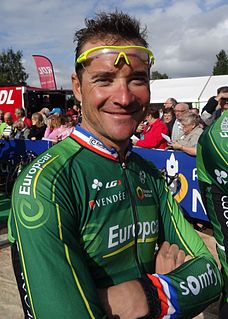 Luc Leblanc is a retired French professional cyclist. In 1994 he was the World Road Champion.

Laurent Brochard is a retired professional road racing cyclist from France. In 1997 he won a stage of the Tour de France and became world road champion in San Sebastián, Spain.

Pierrick Fédrigo is a French former racing cyclist, who rode professionally between 2002 and 2016 for the Crédit Agricole, Bbox Bouygues Telecom, FDJ.fr and Fortuneo–Vital Concept teams. He was the winner of the French National Road Race Championships in 2005, and won four stages at the Tour de France.

Frédéric Guesdon is a French former professional road bicycle racer who competed as a professional between 1995 and 2012, most notably for UCI ProTeam FDJ–BigMat, spending 16 years of his career with the team.

Le Samyn is an annual single-day road bicycle race in Belgium, held usually in late February or early March. The event was created in 1968 as Grand Prix de Fayt-le-Franc, named after the former municipality where it started and finished. In 1970 it was renamed Grand Prix José Samyn as a tribute to José Samyn, the race's first winner who died in a race accident in 1969. Johan Capiot holds the record with three wins.

The Tour of Austria is a stage cycling race held in Austria. From 1949 to 1995 it was a race for amateur cyclists, turning into a professional event in 1996. In 2005 and 2006 it was organised as a 2.1 event on the UCI Europe Tour, becoming a 2.HC event in 2007. The race will become part of the new UCI ProSeries in 2020. Since 2005 it has usually been held in July. Before that, it was seen as an ideal preparation race for the Tour de France. 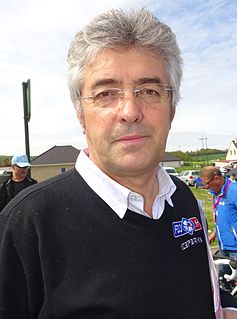 Marc Madiot is a French former professional road racing cyclist and double winner of Paris–Roubaix. He also competed in the individual road race event at the 1980 Summer Olympics. Retired from racing in 1994, he is now best known as the directeur sportif of Groupama–FDJ, a UCI WorldTeam. He is also known as the president of the French Ligue National de Cyclisme (LNC).

Bernard Vallet is a French former road bicycle racer who won the mountains classification in the 1982 Tour de France.

Jens Heppner is a German former road bicycle racer. He wore the pink jersey as leader of the general classification during the 2002 Giro d'Italia. Although he rode for Telekom during ten years, he has consistently denied ever having doped.

René Bittinger is a French former professional road bicycle racer. He competed in the individual road race event at the 1976 Summer Olympics. 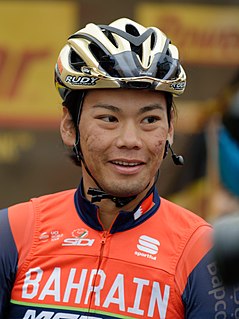 The Tour Féminin en Limousin is an elite women's road bicycle stage race held in France. The race was established in 2005 and is rated by the UCI as a 2.2 category race.

Sigrid Teresa Corneo is a retired Slovenian professional road cyclist of Italian descent. Holding a dual citizenship, she represented her nation Slovenia, as a 37-year-old, at the 2008 Summer Olympics, and has mounted second-place finishes in both road race and time trial at the Slovenian Championships in 2010. Before her official retirement from competitive cycling in 2010, Corneo rode for Italy's Top Girls Fassa Bortolo pro cycling team in the women's elite professional events.

S.C. Michela Fanini Rox is a professional cycling team based in Italy, which competes in elite road bicycle racing events such as the UCI Women's Road World Cup and elite road races.

Benoît Cosnefroy is a French cyclist, who currently rides for UCI WorldTeam AG2R La Mondiale. In July 2019, he was named in the startlist for the 2019 Tour de France. In the 2020 Tour de France, he led the mountains classification and wore the polka dot jersey for 15 consecutive stages, ultimately losing it on stage 17 to eventual winner and overall winner Tadej Pogačar.