The Tour of Good Hope is a multi-day road cycling race that has been held annually in South Africa since 2019. It is part of UCI Africa Tour as a 2.2 event. [1]

The Cape Town Cycle Tour is an annual cycle race hosted in Cape Town, South Africa, usually 109 km (68 mi) long. It is the first event outside Europe to be included in the Union Cycliste Internationale's Golden Bike Series. South Africa hosts some of the largest, by the number of entrants, sporting events in the world with three being the largest of their type. The Cape Town Cycle Tour, with as many as 35 000 cyclists taking part, is the world's largest individually timed cycle race. The other two are the world's largest ultra-marathon running event, the Comrades Marathon, and the world's largest open water swim, the Midmar Mile. 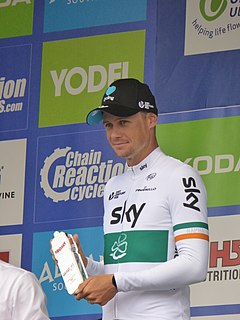 Nicolas Roche is an Irish former professional road bicycle racer who last rode for UCI WorldTeam Team DSM. He has twice been national champion and has twice finished in the top ten of the Vuelta a España, and won stages in 2013 and 2015. He started a total of 24 Grand Tours, finishing 22, and he took a total of 65 top 10 finishes in Grand Tour stages, including 43 on the Vuelta. He represented Ireland at the 2008 Summer Olympics in the road race. He has competed for Ireland 7 times at the road world championships.

Adrien Niyonshuti is a Rwandan former professional bicycle racer, who rode professionally for Team Dimension Data from 2009 to 2017. He now works as a directeur sportif for UCI Continental team Skol Adrien Cycling Academy. Although he survived, six of Niyonshuti's brothers were killed in the Rwandan genocide of 1994. Niyonshuti began riding a bicycle given to him by his uncle as a teenager, when he came to the attention of former professional cyclist Jacques Boyer in 2006 during the first Wooden Bike Classic. 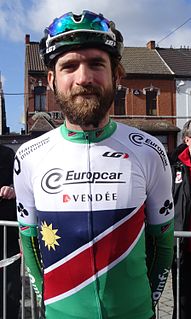 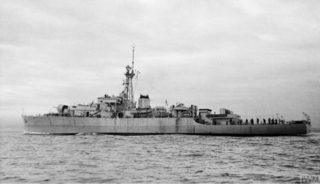 SAS Good Hope was one of three Loch-class frigates in the South African Navy (SAN). It was built as HMS Loch Boisdale (K432) for the Royal Navy during World War II, but was transferred to the SAN before completion in 1944 and renamed as HMSAS Good Hope. The ship was assigned to convoy escort duties in 1945, but did not encounter any enemy ships before the end of the war. 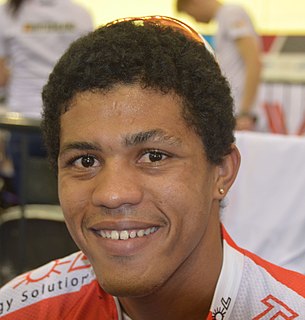 Nolan Hoffman is a South African road and track cyclist, who currently rides for South African team Enza. He was suspended for eighteen months after he tested positive for the use of testosterone on 18 October 2009. He competed in the scratch event at the UCI Track Cycling World Championships in 2012, 2013 and 2014, winning the silver medal in 2012. 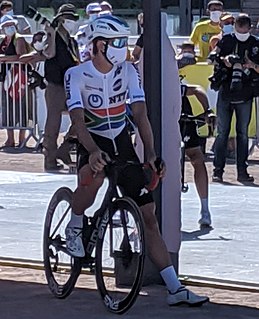 Clint Hendricks is a South African racing cyclist, who currently rides for South African amateur team Enza. He competed in the men's road race event at the 2018 Commonwealth Games, winning the bronze medal.

TEG Pro Cycling is a South African UCI Continental road cycling team. The team was established in 2018 in preparation for the 2019 season.

Reynard Butler is a South African cyclist, who most recently rode for UCI Continental team ProTouch.