Trinity United Methodist Church in Nutbush, Haywood County, Tennessee was founded in 1822. Planters allowed their slaves to attend church with them.

The church is located south of Tennessee State Route 19. Part of the roadway was named "Tina Turner Highway" in 2002 in honor of popular singer Tina Turner, who lived as a child in Nutbush. [1] [2] [3]

In 2002 a stretch of State Route 19 between Brownsville and Nutbush was named "Tina Turner Highway" after singer Tina Turner, who grew up in Nutbush. [1] [2] [3]

Tina Turner is an American-born Swiss singer, songwriter, dancer, and actress. Known as the "Queen of Rock 'n' Roll", she rose to prominence as the frontwoman of The Ike & Tina Turner Revue before launching a successful career as a solo performer. She is noted for her energetic stage presence, powerful vocals, and career longevity.

Interstate 24 (I-24) is an Interstate Highway in the Midwestern and Southeastern United States. It runs diagonally from I-57, 10 miles (16 km) south of Marion, Illinois, to Chattanooga, Tennessee, at I-75. It travels through Illinois, Kentucky, Tennessee, and Georgia. As an even-numbered Interstate, it is signed as an east–west route, though the route follows a more southeast–northwest routing, passing through Nashville, Tennessee. Because the routing of I-24 is diagonal, the numbering deviates from the standard Interstate Highway System numbering conventions. I-24 constitutes the majority of a high-traffic corridor between St. Louis and Atlanta. This corridor utilizes I-64 and I-57 northwest of I-24, and I-75 southeast of I-24.

Lauderdale County is a county located on the western edge of the U.S. state of Tennessee, with its border the Mississippi River. As of the 2010 census, the population was 27,815. Its county seat is Ripley. Since the antebellum years, it has been developed for cotton as a major commodity crop.

Haywood County is a county located in the U.S. state of Tennessee, in the region known as West Tennessee. As of the 2010 census, the population was 18,787. Its county seat and largest city is Brownsville. It is one of only two remaining counties in Tennessee, along with Shelby County, with a majority African-American population.

Brownsville is a city in Haywood County, Tennessee, United States. It is the county seat of Haywood County, located in the western Tennessee Delta. Its population as of the 2010 census was 10,292, down from 10,748 at the 2000 census. The city is named after General Jacob Jennings Brown, an American officer of the War of 1812. 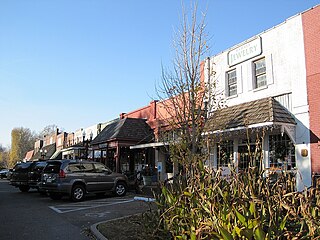 Collierville is a town in Shelby County, Tennessee, United States, and a suburb located in the Memphis metropolitan area. It had a population of 43,965 at the 2010 census, making it the state's largest town by population in that Census. 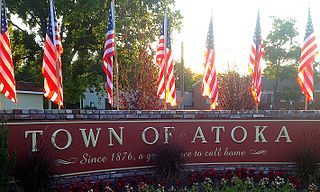 Atoka is a local government area with a town charter in Tipton County, Tennessee, United States. In 1888, Atoka was a stop on the Newport News & Mississippi Valley Railroad. Today the City of New Orleans Amtrak passenger train makes its daily route between New Orleans and Chicago, through Atoka.

Nutbush is a rural unincorporated community in Haywood County, Tennessee, United States, in the western part of that state. It was established in the early 19th century by European-American settlers who brought along or bought enslaved African Americans to develop the area's cotton plantations. The African Americans built houses and churches that still stand. 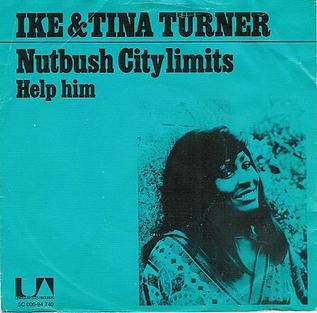 "Nutbush City Limits" is a semi-autobiographical song written by Tina Turner which commemorates her rural hometown of Nutbush, Tennessee, United States. Originally released as a single on United Artists Records in August 1973, it's one of the last hits that husband-wife R&B duo Ike & Tina Turner released together. 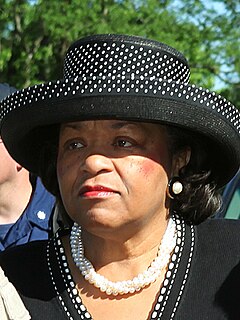 Thelma Harper is a former American politician and the first African-American woman state senator in Tennessee. First elected in 1991, is the longest-serving female State Senator in Tennessee history. She continued to break the glass ceiling by becoming the first woman to preside over the Senate. She was also the first African-American woman to serve as the Chair of the Senate Government Operations Committee; she held that position during the 102nd, 103rd, 104th, and 105th General Assemblies, and she also served as Vice Chair of the Senate State and Local Government Committee during the 97th and 101st General Assemblies and the first Senator to serve as Chair of the Tennessee Black Caucus.

Woodlawn Baptist Church and Cemetery, also known as Woodlawn Missionary Baptist Church, is a historic building in Nutbush, Haywood County, Tennessee, in the United States. It is on Woodlawn Road, south of Tennessee State Route 19.

Nutbush may refer to:

State Route 19 or the Tina Turner Highway is a state highway in Haywood and Lauderdale counties in Tennessee, United States. State Route 19 is 42.81 mi (69 km) long.

Flagg Grove School was a school south of Nutbush in Haywood County, Tennessee, now part of Brownsville. The school was established in the late 19th century and now operates as the Tina Turner Museum.

Randolph is a rural unincorporated community in Tipton County, Tennessee, United States, located on the banks of the Mississippi River. Randolph was founded in the 1820s and in 1827, the Randolph post office was established. In the 1830s, the town became an early center of river commerce in West Tennessee. Randolph shipped more cotton annually than Memphis until 1840. In 1834, the first pastor of the Methodist congregation was appointed. The fortunes of the community began to decline in the late 1840s due to failed railroad development, an unfavorable mail route and other factors. The first Confederate States Army fort in Tennessee was built at Randolph early in the Civil War in 1861, a second fortification at Randolph was constructed later that same year. During the Civil War, the town was burned down twice by Union Army forces. 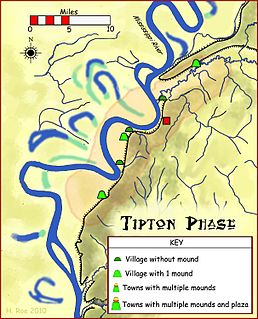