Founded in 1995, the Trinity Western University Dead Sea Scrolls Institute is the only center in North America dedicated to the manuscript discoveries in the Judean Desert and material finds of the Qumran community. [1] With strengths in the textual and philological interpretations of both biblical and non-biblical texts, the Institute provides support and resources graduate and faculty research, events, and publications on the Qumran finds. [2]

The Dead Sea Scrolls are ancient Jewish religious manuscripts found in the Qumran Caves in the West Bank near the Dead Sea. Scholarly consensus dates these scrolls from the last three centuries BCE and the first century CE. The texts have great historical, religious, and linguistic significance because they include the second-oldest known surviving manuscripts of works later included in the Hebrew Bible canon, along with deuterocanonical and extra-biblical manuscripts which preserve evidence of the diversity of religious thought in late Second Temple Judaism. Almost all of the Dead Sea Scrolls collection is currently under the ownership of the Government of the state of Israel, and housed in the Shrine of the Book on the grounds of the Israel Museum. 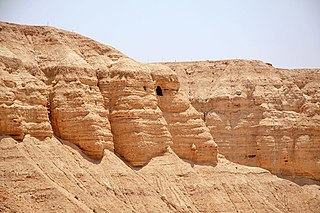 Qumran is an archaeological site in the West Bank managed by Israel's Qumran National Park. It is located on a dry marl plateau about 1.5 km (1 mi) from the northwestern shore of the Dead Sea, near the Israeli settlement and kibbutz of Kalya. The Hellenistic period settlement was constructed during the reign of John Hyrcanus (134–104 BCE) or somewhat later, and was occupied most of the time until it was destroyed by the Romans in 68 CE or shortly after. It is best known as the settlement nearest to the Qumran Caves where the Dead Sea Scrolls were hidden, caves in the sheer desert cliffs and beneath, in the marl terrace. The principal excavations at Qumran were conducted by Roland de Vaux in the 1950s, though several later unearthings at the site have since been carried out.

The Trinity Western University Dead Sea Scrolls institute was founded by Craig Evans in 1995. [3] From 1995-2015, the Institute was co-directed by Martin Abegg and Peter Flint. Following the retirement of Martin Abegg in 2015, Andrew Perrin stepped into the role of co-director alongside Peter Flint. [4] The Institute has been home of the Ben Zion Wacholder Chair and Canada Research Chair in Dead Sea Scrolls Studies.

The Institute has a heritage of hosting public and academic events related to the Dead Sea Scrolls [5] and will launch an open-access initiative for research and reviews on the Qumran finds, entitled Maskilim. [6] Open access resources in the form of public lectures and introductory course content for the Dead Sea Scrolls are also archived on the Institute's YouTube channel. [7] Launched by alumni in 2015, the Dead Sea Scrolls Legacy Scholarship supports graduate students who are entering into the Masters of Arts in Biblical Studies program and display a strong interest in researching topics surrounding the Dead Sea Scrolls. [8]

Pesher (; Hebrew: פשר‎, pl. pesharim from a Hebrew word meaning "interpretation," is a group of interpretive commentaries on scripture. The Pesharim commentaries became known from the discovery of the Dead Sea Scrolls. 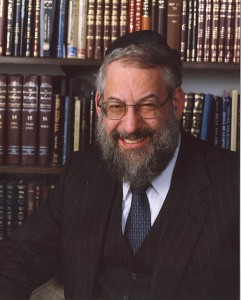 Emanuel Tov is emeritus Professor in the Department of Bible at the Hebrew University of Jerusalem.

John C. Trever was a Biblical scholar and archaeologist, who was involved in the discovery of the Dead Sea Scrolls. 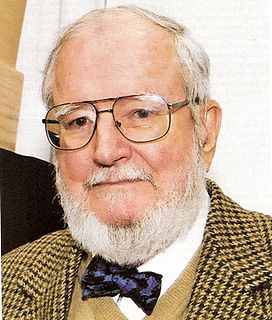 Frank Moore Cross, Jr. was the Hancock Professor of Hebrew and Other Oriental Languages Emeritus at Harvard University, notable for his work in the interpretation of the Dead Sea Scrolls, his 1973 magnum opus Canaanite Myth and Hebrew Epic, and his work in Northwest Semitic epigraphy. Many of his essays on the latter topic have since been collected in Leaves from an Epigrapher's Notebook.

Discoveries in the Judaean Desert is the official, 40-volume, publication series that serves as the editio princeps for the Dead Sea Scrolls. It is published by Oxford University Press.

Eugene Charles Ulrich is a U.S. doctor and the John A. O'Brien Professor of Hebrew Scripture and Theology in the Department of Theology at the University of Notre Dame. He is Chief Editor of the Biblical texts of the Dead Sea Scrolls and one of the three General Editors of the Scrolls International Publication Project. Ulrich has worked under two Editors in Chief on the Scrolls publication project, namely John Strugnell and Emanuel Tov.

The Isaiah Scroll, designated 1Qlsaa and also known as the Great Isaiah Scroll, is one of the seven Dead Sea Scrolls that were first recovered by Bedouin shepherds in 1947 from Qumran Cave 1. The scroll is written in Hebrew and contains the entire Book of Isaiah from beginning to end, apart from a few small damaged portions. It is the oldest complete copy of the Book of Isaiah, being approximately 1000 years older than the oldest Hebrew manuscripts known before the scrolls' discovery. 1QIsaa is also notable in being the only scroll from the Qumran Caves to be preserved almost in its entirety.

James E. Bowley is Chair and Professor of Religious Studies at Millsaps College. He received his Ph.D. in Hebrew Studies from Hebrew Union College-Jewish Institute of Religion (1992). Bowley is a noted editor of the Dead Sea Scrolls concordance project, along with Martin Abegg, Jr., Edward Cook. In addition to the Dead Sea Scrolls, Bowley's research and publishing focus on the Jewish literature of the Greco-Roman World and the cultural interactions among Jews, Greeks, and later Christians, and the use of written and oral traditions in Jewish, Christian, and Islamic communities. Bowley has also written a column for The Clarion-Ledger on religious issues of the day, and is a frequent speaker for community and scholarly events. 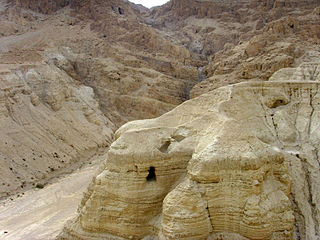 Qumran Caves are a series of caves, some natural, some artificial, found around the archaeological site of Qumran in the Judaean Desert of the West Bank. It is in these caves that the Dead Sea Scrolls were discovered. The caves are recognized in Israel as a National Heritage Site, despite the caves being in occupied Palestinian territories; as such, the designation has drawn criticism.

4Q246, also known as the Son of God Text or the Aramaic Apocalypse, is one of the Dead Sea Scrolls found at Qumran which is notable for an early messianic mention of a son of God. The text is an Aramaic language fragment first acquired in 1958 from cave 4 at Qumran, and the major debate on this fragment has been on the identity of this "son of God" figure.

The W. F. Albright Institute of Archaeological Research (AIAR), is an archaeological research institution located in East Jerusalem. It is the oldest American research center for ancient Near Eastern studies in the Middle East. Founded in 1900 as the American School of Oriental Research, it was renamed in 1970 after its most distinguished director and the father of Biblical archaeology, William F. Albright. Its mission is to develop and disseminate scholarly knowledge of the literature, history, and culture of the Near East, as well as the study of civilization from pre-history to the early Islamic period.

The Nahum Commentary or Pesher Nahum, labelled 4QpNah or 4Q169, was among the Dead Sea Scrolls in cave 4 of Qumran that was discovered in August 1952. The editio princeps of the text is to be found in DJD V., edited by John Allegro. The text is described thus: 'one of the "continuous pesharim" from Qumran, successive verses from the biblical Book of Nahum are interpreted as reflecting historical realities of the 1st century BCE."

Hanan Eshel was an Israeli archaeologist and historian, well known in the field of Dead Sea Scrolls studies, although he did research in the Hasmonean and Bar Kokhba periods as well. With Magen Broshi he discovered a number of residential caves in the near vicinity of Qumran and co-published a number of historically significant documents from Qumran.

The Great Psalms Scroll, also referred to as 11Q5, is the most substantial and well preserved Dead Sea Scrolls Psalms manuscript of the thirty-seven discovered in the Qumran caves, six of which were discovered in Cave 11.

Eileen Marie Schuller is a professor at the Faculty of Social Sciences at McMaster University in Hamilton, Ontario. Dr. Schuller is an official editor of the Dead Sea Scrolls. She teaches undergraduate and graduate studies in the Biblical field. Over a span of 30 years, her involvement in the publication of the Dead Sea Scrolls has led to numerous contributions in authenticating the discoveries found in the caves near the Ancient Qumran settlement.