The Trionto is a river in the Calabria region of southern Italy. It was known in ancient times as the Traeis. [1] It rises in the Sila Mountains and initially flows to the east but gradually changes direction to the north. It drains into the Gulf of Taranto at Pantano Martucci after a course of about 40 kilometers. Its main tributaries are the La Manna, Macrocioli, Ortiano and Laurenzana. It has a drainage basin of 288 square kilometres (111 sq mi). [2] Along its course it passes Longobucco, Cropalati and Crosia. The river is mainly seasonal. The ancient Greek city Sybaris on the Traeis was located near the course of the river, but its location has not been found.

Aegospotami or Aegospotamos is the ancient Greek name for a small river issuing into the Hellespont, northeast of Sestos.

Sybaris was an important city of Magna Graecia. It was situated on the Gulf of Taranto, in Southern Italy, between two rivers, the Crathis (Crati) and the Sybaris (Coscile).

The Khabur River is the largest perennial tributary to the Euphrates in Syrian territory. Although the Khabur originates in Turkey, the karstic springs around Ra's al-'Ayn are the river's main source of water. Several important wadis join the Khabur north of Al-Hasakah, together creating what is known as the Khabur Triangle, or Upper Khabur area. From north to south, annual rainfall in the Khabur basin decreases from over 400 mm to less than 200 mm, making the river a vital water source for agriculture throughout history. The Khabur joins the Euphrates near the town of Busayrah.

The Cephissus, called the Boeotian Cephissus to distinguish it from other rivers of the same name, or Kifisos is a river in central Greece. In Greek mythology the river god Cephissus was associated with this river. The river rises at Lilaia in Phocis, on the northwestern slope of Mount Parnassus. It flows east through the Boeotian plain, passing the towns Amfikleia, Kato Tithorea and Orchomenos. It drained into Lake Copais, which was therefore also called the Cephisian Lake, until 1887, when the lake was drained. An artificial outflow has been created to Lake Yliki, further east.

The Achelous, also Acheloos, is a river in western Greece. It is 220 km (137 mi) long. It formed the boundary between Acarnania and Aetolia of antiquity. It empties into the Ionian Sea. In ancient times its spirit was venerated as the river god Achelous.

Bakırçay (Latin name: Caicus, also Caecus; Ancient Greek: Κάϊκος, transliterated as Kaïkos; formerly Astraeus is the current name of a river of Asia Minor that rises in the Temnus mountains and flows through Lydia, Mysia, and Aeolis before it debouches into the Elaitic Gulf. To the Hittites, it may have been the Seha river, however the modern Gediz river further south is a more likely candidate. The modern Turkish name of the river is Bakırçay, and it is located in the Asian part of Turkey.

The Büyük Menderes River, is a river in southwestern Turkey. It rises in west central Turkey near Dinar before flowing west through the Büyük Menderes graben until reaching the Aegean Sea in the proximity of the ancient Ionian city Miletus. The word "meander" is used to describe a winding pattern, after the river.

The Haliacmon is the longest river in Greece, with a total length of 297 km (185 mi). In Greece there are three rivers longer than Haliakmon, Maritsa, Struma (Strymónas), both coming from Bulgaria, and Vardar, but the length of each one of them in Greek territory is less than that of Haliakmon, which flows entirely in Greece. Haliacmon is the traditional English name for the river, but many sources cite the formerly official Katharevousa version of the name, Aliákmon. Today, the only official variant is the demotic Aliákmonas. It flows through the Greek regions of West Macedonia and Central Macedonia. 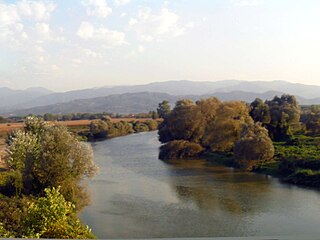 The Sakarya is the third longest river in Turkey. It runs through the region known in ancient times as Phrygia. It was considered one of the principal rivers of Asia Minor (Anatolia) in classical antiquity, and is mentioned in the Iliad and in Theogony. Its name appears in different forms as Sagraphos, Sangaris, or Sagaris.

Küçük Menderes, Cayster River or Kaystros River or Caystrus River is a river south of İzmir, Turkey. It generally flows westward and arrive at the Aegean Sea at Pamucak beach, near Selçuk, İzmir. 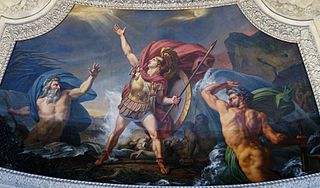 Simoeis or Simois was a river of the Trojan plain, now called the Dümruk Su, and the name of its god in Greek mythology.

Antiochia ad Pyramum was an ancient coastal city of Cilicia, on the Pyramus river, in Anatolia. It was the successor settlement to Magarsa. The location of the city is on the Karataş Peninsula, Adana Province, Turkey, a few km from the city of Karataş. The course of the Pyramus has changed markedly since ancient times and the location of the ruins is no longer adjacent to the river, but decidedly west of its present course. The formerly important ancient site of Mallus lies a few km inland from Antiochia ad Pyranum along the former course of the Pyramus.

Mallus was an ancient city of Cilicia Campestris lying near the mouth of the Pyramus river, in Anatolia. In ancient times, the city was situated at the mouth of the Pyramus, on a hill opposite Magarsa which served as its port. The district was called from it, Mallotis. The location of the site is currently inland a few km from the Mediterranean coast on an elevation in the Karataş Peninsula, Adana Province, Turkey, a few km from the city of Karataş.

Sybaris may refer to:

Sybaris on the Traeis was an ancient city of Magna Grecia situated on the Traeis river, now known as the Trionto. It shares its name with the original city of Sybaris which was destroyed in 510 BC. Its former inhabitants built a new city, Thurii, not far from the site of Sybaris. This new colony was founded together with other Greek settlers in 446/445 BC. Soon a conflict arose between the two groups and most of the Sybarites were killed by the other Greek colonists of Thurii. The Sybarites who managed to flee then founded Sybaris on the Traeis a short time after 444 BC. The city was destroyed by the Bruttii not long after their emergence as an ethnic group in 356/355 BC.

Bartın River, anciently known as Parthenius or Parthenios, is a small river in the east of the Black Sea Region of Turkey. Its source is in the Ilgaz Mountains, in Kastamonu Province and Karabük Province. The river flows to the north, passes through Bartın, and empties into the Black Sea near Boğaz village in a delta.

Gaziura, was a town in Pontus, on the river Iris, near the point where its course turns northwards. Some scholars equate Gaziura with Talaura, others with Ibora, and others with modern Turhal.

Phasis was an ancient and early medieval city on the eastern Black Sea coast, founded in the 7th or 6th century BC as a colony of the Milesian Greeks at the mouth of the eponymous river in Colchis. Its location today is the port city of Poti, Georgia. Its ancient bishopric became a Latin Catholic titular see of Metropolitan rank.