Tripcombi, founded in 2012 as Tripdelta, was a travel metasearch engine that enabled travelers to find airfares globally from different online travel agencies and airlines. It did this by using hidden flight routing and hidden city ticketing techniques. [1] [2] Tripdelta's tactics included combining two separate ticket bookings, searching airfares on low-cost carriers, and booking passengers in the airports close to their place of departure and their intended destination. In March 2015, Tripdelta took part in the third batch of the Microsoft Ventures Accelerator in Berlin. [3] The company was based in Cologne, Germany and, in 2015, was voted as one of "Germany's Top 25 Hottest Young Companies" by Horizont. [4]

Fareportal acquired TripCombi in 2016 and folded it into CheapOAir. [5]

EasyJet plc, styled as easyJet, is a British multinational low-cost airline group headquartered at London Luton Airport. It operates domestic and international scheduled services on over 1,000 routes in more than 30 countries via its affiliate airlines EasyJet UK, EasyJet Switzerland, and EasyJet Europe. EasyJet plc is listed on the London Stock Exchange and is a constituent of the FTSE 250 Index. EasyGroup Holdings Ltd is the largest shareholder with a 15.269% stake. It employs circa 14,000 people, based throughout Europe but mainly in the UK. 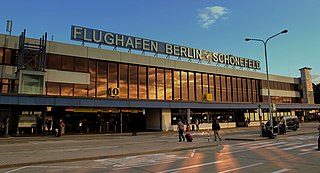 Berlin Schönefeld Airport was the secondary international airport of Berlin, the capital of Germany. It was located 18 km (11 mi) southeast of Berlin near the town of Schönefeld in the state of Brandenburg and bordered Berlin's southern boundary. It was the smaller of the two airports in Berlin, after Berlin Tegel Airport, and served as a base for easyJet and Ryanair. In 2017, the airport handled 12.9 million passengers by serving mainly European metropolitan and leisure destinations. In the same year, the travel portal eDreams after evaluating 65,000 airport reviews ranked Berlin Schönefeld as the worst airport in the world. Schönefeld Airport also was the major civil airport of East Germany (GDR) and the only airport of the former East Berlin. 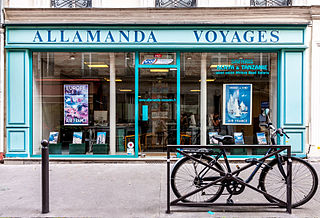 A travel agency is a private retailer or public service that provides travel and tourism-related services to the general public on behalf of accommodation or travel suppliers to offer different kinds of travelling packages for each destination. Travel agencies can provide outdoor recreation activities, airlines, car rentals, cruise lines, hotels, railways, travel insurance, package tours, insurance, guide books, VIP airport lounge access, arranging logistics for luggage and medical items delivery for travellers upon request, public transport timetables, car rentals, and bureau de change services. Travel agencies can also serve as general sales agents for airlines that do not have offices in a specific region. A travel agency's main function is to act as an agent, selling travel products and services on behalf of a supplier. They do not keep inventory in-hand unless they have pre-booked hotel rooms or cabins on a cruise ship for a group travel event such as a wedding, honeymoon, or other group event.

Germanwings GmbH was a German low-cost airline wholly owned by Lufthansa which operated under the Eurowings brand. It was based in Cologne with hubs at Cologne Bonn Airport, Stuttgart Airport, Hamburg Airport, Berlin Tegel Airport, Munich Airport and further bases at Hannover Airport and Dortmund Airport.

Momondo is a travel fare aggregator and travel fare metasearch engine. Momondo also operates a travel information blog, Inspiration. The website is a white-label of the Kayak.com subsidiary of Booking Holdings.

ixigo is an Indian AI-based online travel portal, launched in 2007. Headquartered in Gurgaon, ixigo aggregates and compares real-time travel information, prices and availability for flights, trains, buses, and hotels, and allows ticket booking through its associate websites and apps.

Lyon–Saint Exupéry Airport, formerly known as Lyon Satolas Airport, is the international airport of Lyon, the third-biggest city in France and an important transport facility for the entire Auvergne-Rhône-Alpes region. It lies in Colombier-Saugnieu, 11 nautical miles southeast of Lyon's city centre. The airport is directly linked to Lyon-Part-Dieu Business District thanks to the Rhônexpress shuttle's 30-minute ride.

Wanderu is a ground and air travel metasearch engine that operates throughout North America and Europe. It provides a one-stop search and booking platform for buses, trains and flights through its website and mobile app. Wanderu is headquartered in Boston, Massachusetts.

MakeMyTrip is an Indian online travel company founded in 2000. Headquartered in Gurugram, Haryana, the company provides online travel services including flight tickets, domestic and international holiday packages, hotel reservations, rail, and bus tickets. As of 31 March 2018, they have 14 company-owned travel stores in 14 cities, over 30 franchisee-owned travel stores in 28 cities, and counters in four major airports in India. MakeMyTrip has offices in New York, Singapore, Kuala Lumpur, Phuket, Bangkok, and Dubai.

eDreams ODIGEO is a Spanish online travel company that was formed in 2011 as the successor of eDreams with the merger of online travel agencies eDreams and GO Voyages, and the acquisition of Opodo.

JetRadar is a travel search engine that allows users to compare airline prices and offers, specializing in low-cost airfare.

Mystifly is an airfare distribution and payments settlement marketplace platform. It allows travel businesses to source airfares from global distribution systems (GDS), airlines and other airfare suppliers. Mystifly is headquartered in Singapore, with offices in USA, UK (Middlesex) and India (Bangalore).

Jack's Flight Club is a company co-founded by Jack Sheldon and Phil Wintermantle. It is an email newsletter and mobile app focusing on helping subscribers find cheap flights, using flight deal alerts. There are over 1,000,000 members in the United Kingdom and Europe.

Skiplagged.com is an online travel agency and metasearch engine for booking flights and hotels. It popularized the tactic of hidden city ticketing.