Triple Espresso...A Highly Caffeinated Comedy is a vaudeville style comedy which opened in Minneapolis, Minnesota in 1996 and enjoyed popular long-standing runs in Minneapolis and San Diego, California, (where it holds the record of longest continuously running show in San Diego), as well as short engagements elsewhere in six countries (the United States, Canada, Ireland, the United Kingdom, Belgium, and Germany). The production in Belgium was the first foreign-language version of the show, playing in the city of Ghent, in Flemish. A second foreign language production in German has played in Munich and Berlin. 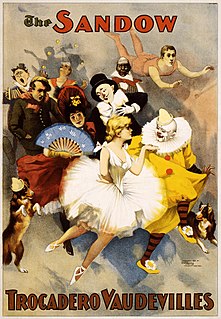 Vaudeville is a theatrical genre of variety entertainment born in France at the end of the 18th century. A vaudeville is a comedy without psychological or moral intentions, based on a comical situation. It was originally a kind of dramatic composition or light poetry, usually a comedy, interspersed with songs or ballets. It became popular in the United States and Canada from the early 1880s until the early 1930s, but the idea of vaudeville's theatre changed radically from its French antecedent.

Triple Espresso closed its permanent run in Minneapolis in April 2008, but has returned regularly for holiday season engagements since then. It is scheduled to return to Minneapolis November 23, 2016 and run through January 8, 2017 at the New Century Theatre.

The plot revolves around three show-biz has-beens: lounge singer Hugh Butternut, an exuberant musician with a vulnerable soul who has spent the past two and a half decades performing in a coffee bar; the titular Triple Espresso; Bobby Bean, an irrepressible, but not-too-sharp entertainer; and taciturn magician Buzz Maxwell; the group's straight man and the brains behind the unintentional comedy team within the show. The three gather on Hugh’s 25th anniversary at the coffeehouse to retell and memorialize their mediocre show-business careers, including a final disastrous performance on The Mike Douglas Show. The plot is designed to make room for a series of comedic sketches which showcase the talents of the three-man cast, originally the show’s writers: musician Michael Pearce Donley, humorist/physical comedian [1] Bob Stromberg and magician/comedian Bill Arnold. [2] (Others are now trained in the roles, and casts rotate based on location and availability of actors.) Their talents include everything from music and magic to choreographed ape imitations and shadow puppets, [3] and the bits occasionally involve the audience as well.

The Mike Douglas Show was an American daytime television talk show that was hosted by Mike Douglas. Initially, it aired only in Cleveland during much of its first two years, followed by expansion to Philadelphia and nationwide. It went into syndication in 1963 and remained on television until 1981. It was distributed by Westinghouse Broadcasting, and for much of its run, originated from studios of two of the company's TV stations in Cleveland and Philadelphia.

Its run in Minneapolis at the Music Box was originally scheduled to end on April 12, 2008; however, it was extended until April 27, 2008. Original cast members Michael Pearce Donley and Bill Arnold performed the final show, with Brian Kelly playing the part of Bobby Bean.

Orson Bean is an American film, television, and stage actor, as well as a stand-up comedian, writer, and producer. He appeared frequently on televised game shows from the 1960s through the 1980s and was a long-time panelist on the television game show To Tell the Truth. 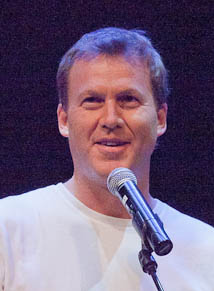 Michael John Nelson is an American comedian and writer, most known for his work on the cult television series Mystery Science Theater 3000 (MST3K). Nelson was the head writer of the series for most of the show's original eleven-year run, and spent half of that time as the on-air host, also named Mike Nelson. In addition to writing books, Nelson is currently part of the online movie riffing sites RiffTrax and The Film Crew with fellow MST3K alumni, Bill Corbett and Kevin Murphy. He has written articles for Cracked.com.

Joel Gordon Hodgson is an American writer, comedian and television actor. He is best known for creating Mystery Science Theater 3000 (MST3K) and starring in it as the character Joel Robinson. In 2007, MST3K was listed as "one of the top 100 television shows of all time" by Time.com. Between 2007–2013, Hodgson was part of the "movie riffing" project Cinematic Titanic with several of his fellow MST3K alumni, performing live and producing content for DVDs and direct download. He has also served as Creative Lead for Media at Pennyslvania technology firm Cannae, though it is unclear if he still holds this title due to a website redesign which removed the names of their staff.

Mr. Show with Bob and David, also known as Mr. Show, is an American sketch comedy series starring and hosted by Bob Odenkirk and David Cross. It aired on HBO from November 3, 1995, to December 28, 1998.

David William Thomas is a Canadian comedian, actor and television writer. He is best known for portraying Doug McKenzie on SCTV as well as in the film Strange Brew, which he also directed.

Bob Carolgees is a comedy entertainer who appeared on the Saturday morning TV series Tiswas and then later in its adult versions O.T.T. and Saturday Stayback. He is best known for appearing with a canine puppet named Spit the Dog. 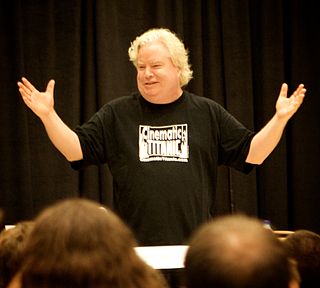 Frank Conniff, Jr. is an American writer, actor and producer who is best known for his portrayal of TV's Frank on Mystery Science Theater 3000 (MST3K). He is the son of the Pulitzer Prize-winning journalist and editor Frank Conniff. 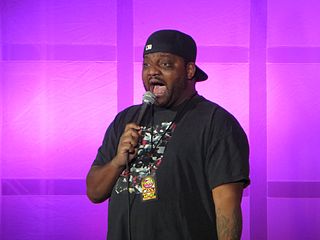 Aries Spears is an American stand-up comedian, actor, and voice artist from New York City. Spears was a regular on Fox's sketch comedy series MADtv, appearing in 198 episodes, making him the second longest-serving cast member on the show behind Michael McDonald. In 2011, he released a special called Aries Spears: Hollywood, Look I'm Smiling.

Robert Lee Jr. is an American actor and comedian of Korean descent, best known for being a cast member on MADtv from 2001 to 2009 and for his roles in the films Harold & Kumar Go to White Castle (2004), Pineapple Express (2008), and The Dictator (2012). Lee currently co-stars in the ABC single-camera sitcom series Splitting Up Together alongside Jenna Fischer and Oliver Hudson. 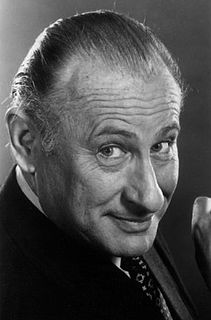 Carl Ballantine was an American magician, comedian and actor. Billing himself as "The Great Ballantine", "The Amazing Ballantine" or "Ballantine: The World's Greatest Magician", his vaudeville-style comedy routine involved transparent or incompetent stage magic tricks, which tended to flop and go "hilariously awry" to the wisecracking Ballantine's mock chagrin. He has been credited with creating comedy magic and has influenced both comics and magicians.

Kevin Johnson is a professional ventriloquist, comedian, and magician.

Steve Byrne is an American stand-up comedian and actor. He is best known for creating and starring in Sullivan & Son.

Bob Nelson, is an American stand-up comedian and actor.

Greg Hahn is an American stand-up comedian. He is a frequent guest on the nationally syndicated The Bob & Tom Show, and has several television appearances including Late Night with Conan O'Brien. He also performs at numerous corporate functions and comedy clubs. He is known for his highly energetic style of humor, often speaking in loud, rapid bursts.

Franklin Taylor Mason is a comedian, ventriloquist and musician.

La Carabina de Ambrosio was a Mexican television show created and developed by Humberto Navarro, filmed at the Televisa Studios, Chapultepec in Mexico City, from 1978 until 1987. The slogan of the show was "A Magical, Comical, and Musical Variety Show." The show had guest emcees that included César Costa, Gualberto Castro, Fito Girón, and Manolo Muñoz. While the emcees sang a cast member would interrupt rudely and a comedy skit began. The show consisted of numerous skits, jokes and tricks played on the emcees. It is rumored that the reason there were so many emcees during the run of the show was due the numerous tricks played on them.

Andy Gross is an American former professional racquetball player, now a touring comedian, ventriloquist, magician, and illusionist. He is known for his television and film appearances, and for his live touring show called Andy Gross's MindBoggling Variety Show.