Triple smear, also known as vaginal-cervical-endocervical (VCE) smear is a cytopathology technique for identifying lesions of the female genital tract. The smear is prepared on separate areas of a single slide with three distinct samples, each from ectocervix, vagina and endocervix. [1] Each sample occupies one-third of the glass slide. This method requires expertise as three samples need to be collected rapidly to avoid drying up of the smear. Triple smear is recommended in patients who had a previous abnormal smear (or endometrial debris in previous smear in a climacteric woman), in postmenopausal women, women with perimenopausal bleeding and those with high risk for endometrial carcinoma. [2] 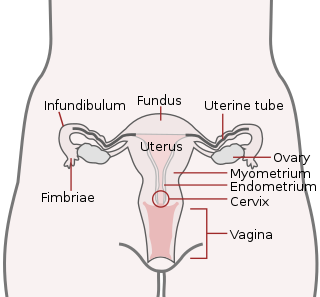 The endometrium is the inner epithelial layer, along with its mucous membrane, of the mammalian uterus. It has a basal layer and a functional layer; the functional layer thickens and then is shed during menstruation in humans and some other mammals, including apes, Old World monkeys, some species of bat, the elephant shrew and the Cairo spiny mouse. In most other mammals, the endometrium is reabsorbed in the estrous cycle. During pregnancy, the glands and blood vessels in the endometrium further increase in size and number. Vascular spaces fuse and become interconnected, forming the placenta, which supplies oxygen and nutrition to the embryo and fetus. The speculated presence of an endometrial microbiota has been argued against.

The Papanicolaou test is a method of cervical screening used to detect potentially precancerous and cancerous processes in the cervix or colon. Abnormal findings are often followed up by more sensitive diagnostic procedures and, if warranted, interventions that aim to prevent progression to cervical cancer. The test was independently invented in the 1920s by Georgios Papanikolaou and Aurel Babeș and named after Papanikolaou. A simplified version of the test was introduced by Anna Marion Hilliard in 1957.

Cytopathology is a branch of pathology that studies and diagnoses diseases on the cellular level. The discipline was founded by George Nicolas Papanicolaou in 1928. Cytopathology is generally used on samples of free cells or tissue fragments, in contrast to histopathology, which studies whole tissues. Cytopathology is frequently, less precisely, called "cytology", which means "the study of cells". 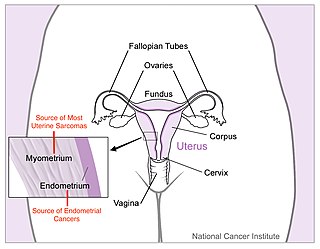 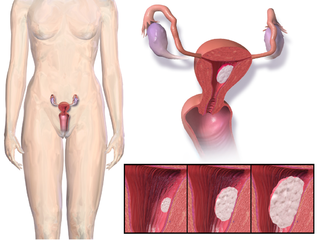 Endometrial cancer is a cancer that arises from the endometrium. It is the result of the abnormal growth of cells that have the ability to invade or spread to other parts of the body. The first sign is most often vaginal bleeding not associated with a menstrual period. Other symptoms include pain with urination, pain during sexual intercourse, or pelvic pain. Endometrial cancer occurs most commonly after menopause. 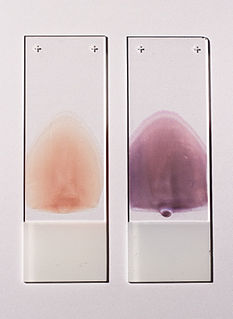 A blood film—or peripheral blood smear—is a thin layer of blood smeared on a glass microscope slide and then stained in such a way as to allow the various blood cells to be examined microscopically. Blood films are examined in the investigation of hematological (blood) disorders and are routinely employed to look for blood parasites, such as those of malaria and filariasis. 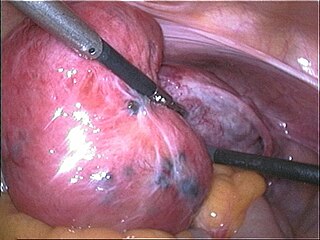 Adenomyosis is a medical condition characterized by the growth of cells that build up the inside of the uterus (endometrium) atypically located within the cells that put up the uterine wall (myometrium), as a result, thickening of the uterus occurs. As well as being misplaced in patients with this condition, endometrial tissue is completely functional. The tissue thickens, sheds and bleeds during every menstrual cycle. 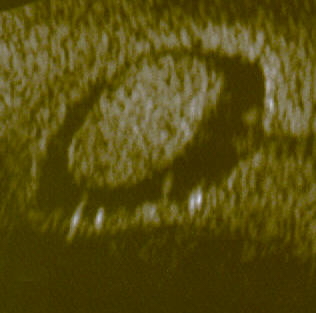 An endometrial polyp or uterine polyp is a mass in the inner lining of the uterus. They may have a large flat base (sessile) or be attached to the uterus by an elongated pedicle (pedunculated). Pedunculated polyps are more common than sessile ones. They range in size from a few millimeters to several centimeters. If pedunculated, they can protrude through the cervix into the vagina. Small blood vessels may be present, particularly in large polyps. 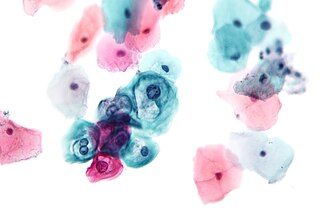 Papanicolaou stain is a multichromatic (multicolored) cytological staining technique developed by George Papanicolaou in 1942. The Papanicolaou stain is one of the most widely used stains in cytology, where it is used to aid pathologists in making a diagnosis. Although most notable for its use in the detection of cervical cancer in the Pap test or Pap smear, it is also used to stain non-gynecological specimen preparations from a variety of bodily secretions and from small needle biopsies of organs and tissues. Papanicolaou published three formulations of this stain in 1942, 1954, and 1960. 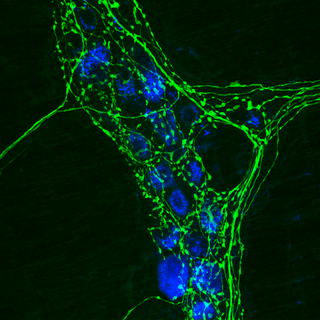 Immunocytochemistry (ICC) is a common laboratory technique that is used to anatomically visualize the localization of a specific protein or antigen in cells by use of a specific primary antibody that binds to it. The primary antibody allows visualization of the protein under a fluorescence microscope when it is bound by a secondary antibody that has a conjugated fluorophore. ICC allows researchers to evaluate whether or not cells in a particular sample express the antigen in question. In cases where an immunopositive signal is found, ICC also allows researchers to determine which sub-cellular compartments are expressing the antigen. 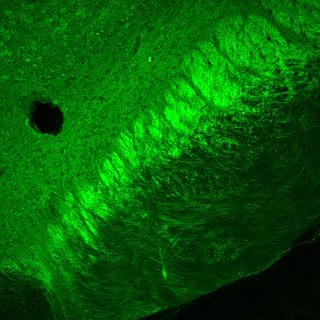 In the fields of histology, pathology, and cell biology, fixation is the preservation of biological tissues from decay due to autolysis or putrefaction. It terminates any ongoing biochemical reactions and may also increase the treated tissues' mechanical strength or stability. Tissue fixation is a critical step in the preparation of histological sections, its broad objective being to preserve cells and tissue components and to do this in such a way as to allow for the preparation of thin, stained sections. This allows the investigation of the tissues' structure, which is determined by the shapes and sizes of such macromolecules as proteins and nucleic acids. 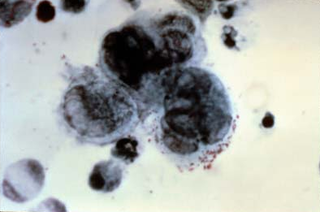 In dermatopathology, the Tzanck test, also Tzanck smear, is scraping of an ulcer base to look for Tzanck cells. It is sometimes also called the chickenpox skin test and the herpes skin test. It is a simple, low-cost, and rapid office based test.

Endometrial hyperplasia is a condition of excessive proliferation of the cells of the endometrium, or inner lining of the uterus. 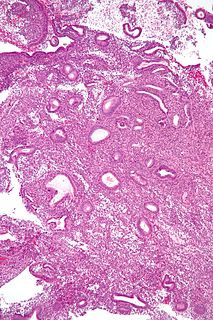 The endometrial biopsy is a medical procedure that involves taking a tissue sample of the lining of the uterus. The tissue subsequently undergoes a histologic evaluation which aids the physician in forming a diagnosis.

The Tao brush is a medical instrument used to perform an alternative method of endometrial biopsy, for the purpose of detecting endometrial cancer. 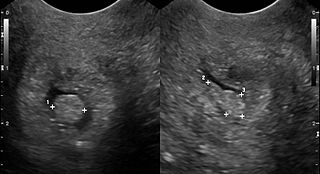 A cervical polyp is a common benign polyp or tumour on the surface of the cervical canal. They can cause irregular menstrual bleeding but often show no symptoms. Treatment consists of simple removal of the polyp and prognosis is generally good. About 1% of cervical polyps will show neoplastic change which may lead to cancer. They are most common in post-menarche, pre-menopausal women who have been pregnant.

A vaginal wet mount is a gynecologic test wherein a sample of vaginal discharge is observed by wet mount microscopy by placing the specimen on a glass slide and mixing with a salt solution. It is used to find the cause of vaginitis and vulvitis. 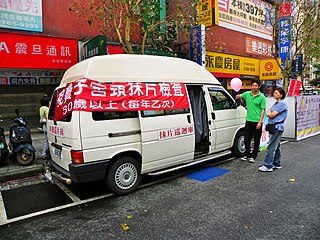 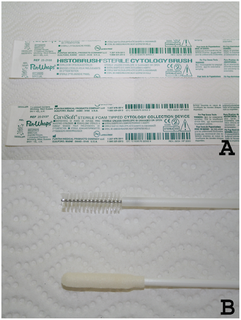 Liquid-based cytology is a method of preparing samples for examination in cytopathology. The sample is collected, normally by a small brush, in the same way as for a conventional smear test, but rather than the smear being transferred directly to a microscope slide, the sample is deposited into a small bottle of preservative liquid. At the laboratory, the liquid is treated to remove other elements such as mucus before a layer of cells is placed on a slide. The technique improves specimen adequacy and HSIL detection. The United Kingdom screening programmes changed their cervical screening method from the Pap test to liquid-based cytology in 2008.