Trista Mateer is an American writer and visual artist from Westminster, Maryland. She won the Goodreads Choice Award in 2015 for poetry with The Dogs I Have Kissed. [1] [2] Her collection Aphrodite Made Me Do It was also voted one of the best books of the year by Goodreads users in 2019. [3] She has been invited to speak on multiple occasions about cultivating a social media presence for poetry [4] and for the importance of queer representation in media. 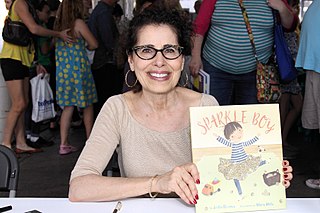 Sylvia June Day is a Japanese American writer of romance novels. She also writes under the pseudonyms S.J. Day and Livia Dare. She is a number one bestselling author in 28 countries. 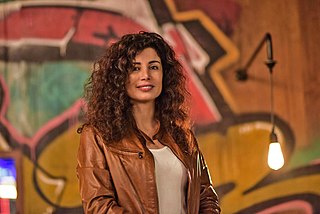 Joumana Haddad is a Lebanese author, public speaker, journalist and human rights activist. She has been selected as one of the world’s 100 most powerful Arab women by Arabian Business Magazine for her cultural and social activism. In 2021, she was on Apolitical's list of 100 most influential people in Gender Policy. She is founder of Jasad, a quarterly Arabic-language magazine specialized in the arts and literature of the body (2009–2011). Haddad launched a new TV show in November 2018 on Alhurra highlighting the topics of free expression and critical thinking. In September 2019, she founded a youth centered NGO in Beirut called the Joumana Haddad Freedoms Center. In February 2020, in partnership with the Institut Français in Lebanon, she launched the first International Feminisms Festival in the Middle East with a group of local and international co-organizers. 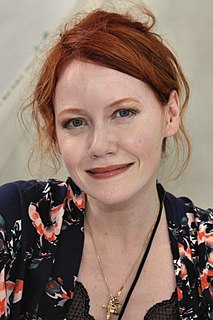 Richelle Mead is an American fantasy author. She is known for the Georgina Kincaid series, Vampire Academy, Bloodlines and the Dark Swan series.

Nancy Jo Sales is a New York Times bestselling author and journalist at Vanity Fair, New York magazine, and Harper's Bazaar, among others. In 2011 she wrote an article called "The Suspects Wore Louboutins" in Vanity Fair that was made into The Bling Ring. 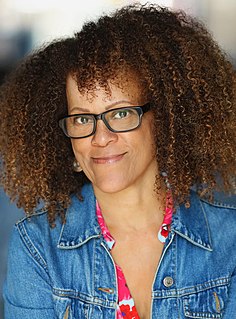 Bernardine Anne Mobolaji Evaristo,, is a British author and academic. Her eighth book, the novel, Girl, Woman, Other, won the Booker Prize in 2019, making her the first black woman and the first black British person to win it. In 2020 she won the British Book Awards: Fiction Book of the Year and Author of the Year, as well as the Indie Book Award for Fiction as well as many other awards. The novel was one of Barack Obama's 19 Favourite Books of 2019 and Roxane Gay's Favourite Book of 2019. In June 2020 she became the first woman of colour and the first black British writer to get to number 1 in the UK paperback fiction charts, where she held the top spot for five weeks. There are over 50 foreign language translations of Evaristo's books in process. Evaristo's writing also includes short fiction, drama, poetry, essays, literary criticism, and projects for stage and radio. Two of her books, The Emperor's Babe (2001) and Hello Mum (2010), have been adapted into BBC Radio 4 dramas. Her ninth book, Manifesto: On Never Giving Up is published by Penguin UK October 2021 and Grove Atlantic USA (2022).

Jessica Marie FreyFRY is a Canadian science fiction and fantasy author. While she is best known for her debut novel Triptych, Frey's work encompasses poetry, academic and magazine articles, screenplays, and short stories. Frey calls herself a "professional geek".

Kirstin Cronn-Mills is an American author of children's books, including the Minnesota Book Award finalist The Sky Always Hears Me And the Hills Don't Mind (2009) and Beautiful Music for Ugly Children (2012) which was a Stonewall Book Award winner and a Lambda Literary Award finalist. Her third novel, Original Fake (2016), was a Minnesota Book Award finalist in 2017, along with her third nonfiction volume for high school libraries, LGBTQ+ Athletes Claim the Field. Her fourth novel, Wreck, will be published in 2019.

The Goodreads Choice Awards is a yearly award program, first launched on Goodreads in 2009. 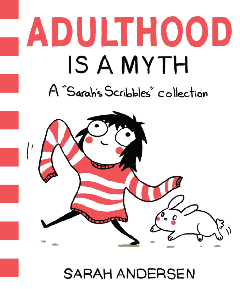 Sarah's Scribbles is a webcomic by Sarah Andersen started in 2011. Andersen initially published the webcomic on Tumblr, but has since released it on various services, such as Facebook, Instagram, Tapas and her own website. Sarah's Scribbles follows Andersen's experiences as a millennial and focuses on themes such as adulthood and maturity. The comic receives millions of views on the Tapas platform and has won multiple Goodreads Choice Awards and a Ringo Award. Andersen has published three print collections of the webcomic: Adulthood is a Myth;Big Mushy Happy Lump; andHerding Cats. 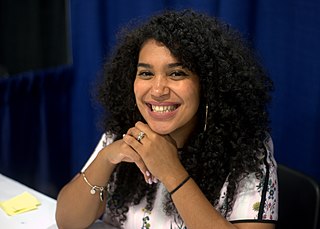 Elizabeth Acevedo is a Dominican-American poet and author. She is the author of The Poet X, With the Fire on High, and Clap When You Land. The Poet X is a New York Times Bestseller, National Book Award Winner, and Carnegie Medal winner. She is also the winner of the 2019 Michael L. Printz Award, the 2018 Pura Belpre Award, and the Boston-Globe Hornbook Award Prize for Best Children’s Fiction of 2018. She lives in Washington, DC. 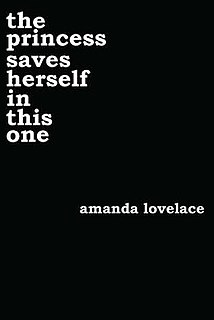 The Princess Saves Herself in This One is the debut collection of poetry by American poet Amanda Lovelace, first self-published in 2016 through CreateSpace and then published by Andrews McMeel Publishing in 2017. Its narrative arc follows a princess who is learning to become her own savior; the semi-autobiographical book's author is the princess. It is the first installment in a series called Women Are Some Kind of Magic, which focuses on the resilience of women. The book won the Goodreads Choice Award for poetry in 2016. 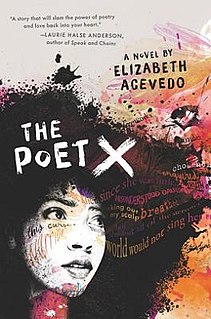 The Poet X, published March 6, 2018 by HarperTeen, is a young adult novel by Elizabeth Acevedo. Fifteen-year-old Xiomara, who goes by X, works through the tension and conflict in her family by writing poetry. The book was well received and won multiple awards at the 2019 Youth Media Awards.

Lang Leav is an international bestselling New Zealand novelist and poet. She is the author of Lullabies which won the Goodreads Choice Award in the category of Best Poetry (2014).

Two Boys Kissing, published in 2013, was written by American author David Levithan. Inspired by true events, the book follows two 17-year-old boys who set out to break a Guinness World Record by kissing for 32 hours. The book includes a "Greek chorus" of the generation of gay men who died of AIDS. Throughout the narrative, the book discusses topics such as relationships, coming out, gender identity, and hook-up culture.