Tristan Homer is a Canadian television producer and podcaster.

He was most recently the co-executive producer of the Netflix computer-animated series My Little Pony: Make Your Mark. [1]

He has also served as creative producer of the animated children's television program Alien TV [2] , and producer on Cupcake & Dino: General Services, [3] Almost Naked Animals, [4] Numb Chucks, [5] Winston Steinburger and Sir Dudley Ding Dong, [6] and as line producer on the series Max & Ruby, [7] as well as the Gemini-nominated television adaptation of Wibbly Pig. [8]

As a podcaster, Homer co-created the video series Jim Dupree: Enthusiast in 2005. The podcast was later adapted for television, and aired on BiteTV in Canada. [9]

Paul Robert Soles was a Canadian actor and television personality. He led the voice cast in such series as The Marvel Super Heroes (1966), voiced the title character in Spider-Man (1967), and portrayed Hermey in the 1964 television special Rudolph the Red-Nosed Reindeer; Soles was one of the last surviving participants of the special's voice cast.

John A. Derevlany is a writer, director, and performer known for co-creating the TV series Legends of Chima for LEGO. He also wrote every episode of the series and the Legends of Chima 4D movie playing at Legoland theme parks and Legoland Discovery Centers. Derevlany is also known for playing "Crackers the Corporate Crime Fighting Chicken" in Michael Moore's TV Nation. In addition, he created the preschool dance and movement show Animal Jam for Jim Henson Productions and the Discovery Channel, wrote many episodes of cartoon The Angry Beavers, and co-founded the heavy-metal ukulele band Uke Til U Puke.

Robert Tinkler is a Canadian voice actor who provides voices for a number of cartoons and anime shows. He voiced Max in The Adventures of Sam & Max: Freelance Police, Delete in the children's animated series Cyberchase, Pelswick Eggert in Pelswick, and Howie in Almost Naked Animals.

Ding Dong is a chocolate snack cake marketed under the Hostess brand name.

Will McRobb and Chris Viscardi are a team of American show-creators, writers and producers of television and screenwriters.

Joris Jarsky is a Canadian stage, film, and television actor who has received recognition for being a versatile actor. Jarsky is a graduate of the National Theatre School of Canada. Upon graduation, Jarsky was cast in Tarragon Theatre’s Production of “The Awakening” for which he was nominated for a Dora Award. Since then he has acted in over 70 film and television productions and worked across the globe. His films have played at festivals all over the world including the opening night of the Cannes Film Festival. In 2009 Jarsky had 3 films in the Toronto International Film Festival, one of which, “Toronto Stories”, garnered him an ACTRA Award nomination. He has starred alongside Mark Ruffalo in “Blindness”, Edward Norton in “The Incredible Hulk”, Catherine Deneuve “Nearest To Heaven”, Lauren Bacall ” The Limit” and Ryan Reynolds in “FoolProof” to name a few. He created, wrote, produced, and starred in the pilot “The Joseph Michael Joseph Show” which was picked up by 11Television Entertainment, a division of 3Arts Entertainment. In 2016 Jarsky was nominated for a Canadian Screen Award for his performance in the Incendo film, “First Response”. He has appeared as major recurring characters in the series “Wynona Earp” and “The Art of More”, starred alongside Kim Coates in the hit mini series “Bad Blood”, and guest starred on “The Good Doctor." Jarsky recently starred in “Ordinary Days” and “Birdland”, two films that drew high praise on the festival circuit across North America. Current projects include guest star spots in CBC’s “Murdoch Mysteries” and CTV’s “Carter,” as well as the recurring role of ‘Basil Tate’ in the new Netflix’s sci-fi drama, “October Faction."

Biggs is a Portuguese basic cable and satellite television targeted to children, teens and youth ages 8 to 14. It was launched on 1 December 2009 on the NOS platform. It airs live-action shows, films, anime and cartoon shows. It also used to air archived programs from Canal Panda. Its design is very similar to that of YTV and Disney XD. 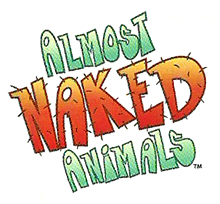 Almost Naked Animals is a Canadian animated television series produced by 9 Story Entertainment for YTV. The series was created by Noah Z. Jones, who is also the creator of the Disney Channel animated series Fish Hooks. It was based upon an art website that Jones created in 2005. The series premiered on January 7, 2011 on YTV, and ended on May 22, 2013.

Entertainment One Ltd., commonly abbreviated as eOne, is an American-owned multinational entertainment company. Based in Toronto, Ontario, Canada, the company is primarily involved in the acquisition, distribution, and production of films and television series. The company was listed on the London Stock Exchange before it was acquired by Hasbro on December 30, 2019.

Allan Charles Neuwirth is an American screenwriter, producer, author, designer, and cartoonist known for his work in film, television, and print, as co-creator of the syndicated comic strip Chelsea Boys.

Timothy Bain is an Australian writer. He is known for writing comedy, children's and animated series for television and as the creator and co-executive producer of ABC Kids' action-comedy series Kangaroo Beach.

My Little Pony: The Movie is a 2017 animated musical fantasy film in line with the continuity of the animated television series My Little Pony: Friendship is Magic, which itself is part of the fourth incarnation of Hasbro's My Little Pony toyline and franchise. The film was directed by Jayson Thiessen, written by Meghan McCarthy, Michael Vogel, Joe Ballarini, and Rita Hsiao, and produced by Stephen Davis, Brian Goldner, Marcia Gwendolyn Jones, and Haven Alexander. The plot follows the alicorn Twilight Sparkle, her five pony friends – collectively known as the "Mane 6" – and her dragon friend Spike embarking on a quest to save their home of Equestria from an evil conqueror while gaining new friends along the way. The film stars the show's regular voice cast of Tara Strong, Ashleigh Ball, Andrea Libman, Tabitha St. Germain, Cathy Weseluck, and Nicole Oliver reprising their roles and the guest voices of Emily Blunt, Kristin Chenoweth, Liev Schreiber, Michael Peña, Sia, Taye Diggs, Uzo Aduba and Zoe Saldana as new characters.

Cupcake and Dino: General Services is an animated streaming television series created by Pedro Eboli for Teletoon in Canada, Disney XD in Latin America & Brazil, and Netflix in the US.

Thomas Duncan-Watt is an Australian screenwriter and playwright. He has won three AWGIE awards for his screenplays from five nominations. His work on UK series Dennis & Gnasher earned the series its first BAFTA nomination. In 2017, he was one of the mentors at the Arts/Screen Hackathon, along with Sarah Houbolt and others, which was organized by Australia Council for the Arts.

Evany Rosen is a Canadian comedian and actress, most noted as a founding member of the comedy troupe Picnicface and as co-creator with Kayla Lorette of the Crave original series New Eden.