He has worked extensively for David Holmes on the award-winning series Killing Eve, the 2015 Ivor Novello winning Yann Demange film '71 [5] and "London Spy", and the film Ordinary Love and for Adrian Corker on the Tim Roth series "Tin Star (2017)".

Among others he scored the feature films Trick Or Treat (2019), the road film Hellbent (2018) and two John Hardwick feature films Svengali [6] and "Follow The Money".

In October 2014, Norwell released his record Mal Influence, on his Cinefonietta Label, an experimental album melding his classical influences with electronica. [9] Critiques have described it "as tough and breakable as glass...somewhere between chamber pop, the ambience of quieter Aphex Twin" [10] and that "it never adds up to anything less than compelling" [11] 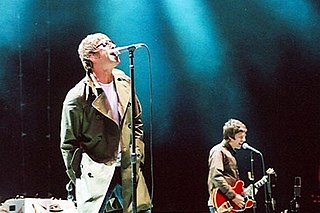 Oasis were an English rock band formed in Manchester in 1991. They were originally known as the Rain before evolving into Oasis, and initially consisted of Liam Gallagher, Paul Arthurs (guitar), Paul McGuigan, and Tony McCarroll (drums). Upon returning to Manchester, Liam's older brother Noel joined as a fifth member, finalising the band's core line-up. During the course of their existence, they had various line-up changes, though the Gallagher brothers remained as the staple members.

William John Paul Gallagher is an English singer and songwriter. He achieved fame as the lead singer and frontman of the rock band Oasis from 1991 to 2009, and later fronted the rock band Beady Eye from 2009 to 2014, before starting a solo career in 2017. Oasis had various line-up changes, though Gallagher and his older brother Noel remained as the staple members. 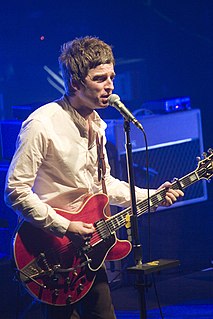 Noel Thomas David Gallagher is an English singer, songwriter and musician. He served as the songwriter, lead guitarist, and co-lead vocalist of the rock band Oasis. After leaving Oasis in 2009, he formed and became the lead vocalist, guitarist, and songwriter for Noel Gallagher's High Flying Birds. Oasis had various line-up changes, though Gallagher and his brother Liam remained as the staple members. He is widely considered to be one of the most influential songwriters in the history of British rock music, cited by numerous major subsequent artists as an influence.

Alan McGee is a Scottish businessman and music industry executive. He has been a record label owner, musician, manager, and music blogger for The Guardian. He co-founded the independent Creation Records label, running it from 1983 until its closure in 1999.

David Holmes is an electronic musician and composer. Born in Northern Ireland, Holmes worked as a DJ before releasing several solo albums that have incorporated elements of trip hop, big beat, electronic and rock. In the late 1990s, Holmes also began composing film scores, establishing a long-standing collaboration with director Steven Soderbergh that includes Out of Sight (1998) and the Ocean's trilogy. 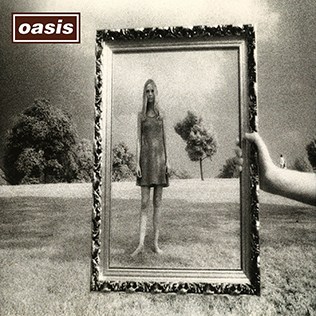 "Wonderwall" is a song by English band Oasis. The song was produced by Noel Gallagher and Owen Morris for the band's second studio album (What's the Story) Morning Glory?, released in 1995. According to Gallagher, "Wonderwall" describes "an imaginary friend who's gonna come and save you from yourself".

Talvin Singh OBE is an English musician, producer, and composer. A tabla player, he is known for creating an innovative fusion of Indian classical music and drum and bass. Singh is generally considered involved with an electronica subgenre called Asian Underground, and more recently as Indian and/or Asian electronica.

Asian underground is a term associated with various British Asian and South Asian Canadian musicians who blend elements of Western underground dance music and the traditional Asian music of their home countries in South Asia. The sound has roots in the South Asian Diaspora, and many notable musicians within the genre are immigrants or children of immigrants. The first well-known mention was the compilation album Anokha - Soundz of the Asian Underground released in 1997 and masterminded by Talvin Singh and Sweety Kapoor. It is not a strict musical genre per se, since the specific sounds can vary wildly. 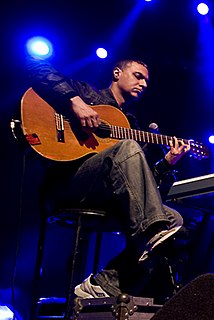 Nitin Sawhney, D.Mus is a British musician, producer and composer. A recipient of the Ivor Novello Lifetime Achievement award in 2017, among multiple international awards throughout his career. Sawhney's work combines Asian and other worldwide influences with elements of electronica and often explores themes such as multiculturalism, politics, and spirituality. Sawhney is also active in the promotion of arts and cultural matters, is chair of the PRS Foundation, on the senate of the Ivor Novello Academy, on the board of trustees of theatre company Complicité, and is a patron of numerous film festivals, venues, and educational institutions. In 2021 he was an ambassador for the Royal Albert Hall.

Iain Archer is a writer, producer and solo artist from Bangor, Northern Ireland. He is a two-time Ivor Novello Award winner, winning the 2004 Album Award – Final Straw by Snow Patrol and Most Performed Work in 2016 for Grammy nominated "Hold Back the River", which he co-wrote with James Bay. Additionally, Archer was a 2013 Ivor Novello Award nominee for Best Song Musically & Lyrically – "Two Fingers" by Jake Bugg. 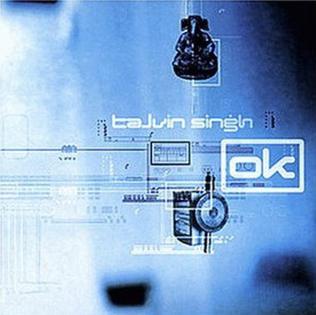 OK is the debut studio album by English / Indian tabla player and record producer Talvin Singh, released on Island Records in 1998. It won him the Mercury Prize for 1999. The record was included in the book 1001 Albums You Must Hear Before You Die. It took nine months of travelling around and recording to complete the album. Singh recorded in London and on Okinawa Island to capture folk singers, as well as in India to collaborate with the Madras Philharmonic Orchestra. 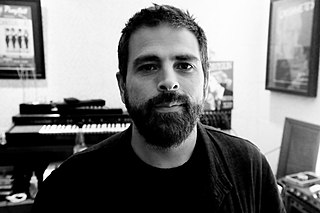 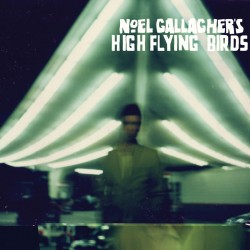 Daniel James Grech-Marguerat, also known as Dan Grech,, is an English recording engineer, record producer and mixer. His production style pulls together a blend of alternative and pop genres. He is recognized for bringing a contemporary a sound to alternative music and a left-leaning edge to pop music.

The English rock band Noel Gallagher's High Flying Birds have released three studio albums, one compilation album, four extended plays (EPs), one box set, twenty singles and thirteen music videos. Originally formed by eponymous frontman Noel Gallagher in 2010 following his departure from Oasis, the band released their self-titled debut album in October 2011. It topped the UK Albums Chart and has since sold over 820,000 copies in the UK. Noel Gallagher's High Flying Birds was supported by five singles, two of which reached the top 20 of the UK Singles Chart. B-sides from the first four of these were released in April 2012 as Songs from the Great White North... 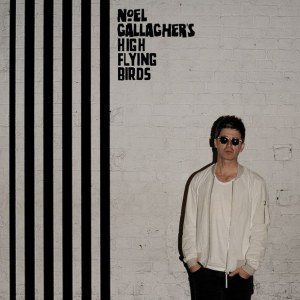 Chasing Yesterday is the second studio album by the English rock band Noel Gallagher's High Flying Birds. Written and produced by eponymous frontman Noel Gallagher, the album was recorded from 2012 to 2014 at Strangeways and Abbey Road Studios in London. It was released on 2 March 2015 by Gallagher's record label Sour Mash Records, preceded by the singles "In the Heat of the Moment" and "Ballad of the Mighty I". Chasing Yesterday topped the UK Albums Chart in its first week of release. 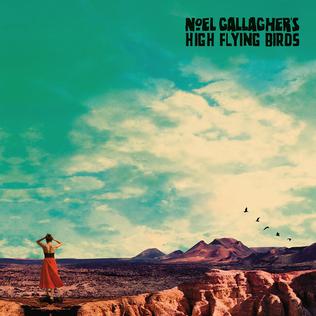 Who Built the Moon? is the third studio album by English rock band Noel Gallagher's High Flying Birds. It was released on 24 November 2017, through Sour Mash Records. The album was produced by David Holmes. 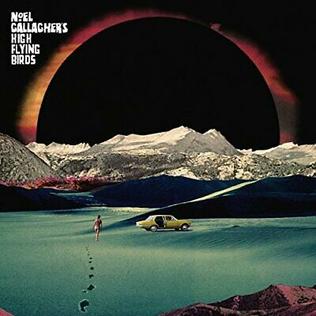 "Holy Mountain" is a song by English rock band Noel Gallagher's High Flying Birds. Written by frontman Noel Gallagher, it was released on 9 October 2017 as the first single from the band's third studio album Who Built the Moon? (2017). The song features Paul Weller playing organ. 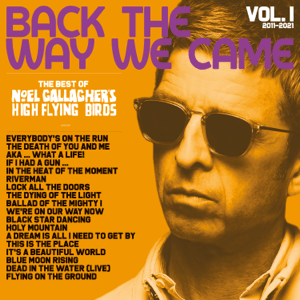 Back the Way We Came: Vol. 1 (2011–2021) is a compilation album by English rock band Noel Gallagher's High Flying Birds. It was released on 11 June 2021 by Sour Mash Records. The album was curated and compiled by Noel Gallagher. The standard 2-CD version of the album includes tracks from the band's first three albums, Noel Gallagher's High Flying Birds (2011), Chasing Yesterday (2015) and Who Built the Moon? (2017), and the three EPs Black Star Dancing (2019), This Is the Place (2019) and Blue Moon Rising (2020), plus two previously unreleased tracks, "We're on Our Way Now" and "Flying on the Ground", the former of which was released as a single the same day as the announcement of the album, on 29 April 2021. A deluxe edition includes a third CD of alternative versions, instrumental versions and remixes of various tracks.