Their first single 'Shiver' charted on the German DAC charts with remixes from Assemblage 23 and Echo Image. Released on the German label Intrapop and distributed by A Different Drum, 'Shiver' earned positive music reviews. Gray, their debut album on Section 44 Records, was released in 2005 followed by a second single "First Embrace" in 2006. Tristraum has appeared on dozens of various artists compilations and remixed over 25 other artists in their first two years together.

Norman and Erkelens launched Section 44 in 2005 to release Tristraum's debut album along with synthpop/electronic tributes to '80s synthpop pioneers Dead or Alive and Pop/Alt Rock band The Fixx. Section 44 Records has signed over a dozen artists from around the globe. From the United Kingdom: The Alphabet Girls and Eight to Infinity. From Costa Rica: Sybel. From Australia: Tycho Brahe. From Denmark: Fake the Envy. From USA: Eloquent, Provision, Rhythmic Symphony. From Sweden: Royal Visionaries. The label acquired World Synthpop Records in 2005 and Kiss My Asterix Records in 2006.

Velvet Acid Christ (VAC) is an electro-industrial band based in Denver, Colorado. The band was formed in 1990 by lead vocalist, musician, and producer Bryan Erickson, and later featured various ex-members of Toxic Coma. The project gained limited popularity in Europe's underground nightclub scene during the mid-1990s with the compilation Church of Acid (1996) before expanding into other markets in the goth and industrial subcultures. The band's discography includes 13 albums, the latest being Dire Land (2015).

Apoptygma Berzerk is a Norwegian musical group. They have achieved success with a brand of synthpop, and ballads backed with electronic rhythms, commonly known within the scene and referring to themselves as "futurepop". Apoptygma Berzerk has over 30 releases and won awards and Top 10 spots in Germany and Scandinavia. Apoptygma Berzerk has toured Europe, North America, South America, Israel and Australia with bands such as VNV Nation, Beborn Beton, Icon of Coil and Unheilig.

A Different Drum was an independent record label and online store based in Smithfield, Utah, founded in 1996. The label specialized in synthpop and related genres. A Different Drum has released hundreds of albums, singles, and compilations and was the biggest synthpop label in the U.S. 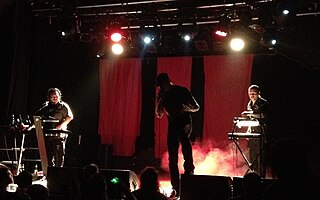 Icon of Coil is a Norwegian electronic music band. The band was established as a solo project in 1997 by Andy LaPlegua who was joined by former Sector 9 bandmate Sebastian Komor to perform live. With the release of Shallow Nation, the band's first single, Komor joined full-time. In 2000, Christian Lund joined the live lineup. Later that year the band's first full-length album, Serenity is the Devil, was released, which climbed to number one on the Deutsche Alternative Charts. Shortly thereafter, Lund became a full-time band member.

Echo Image is a Norwegian synthpop band. The band unofficially started in 1997 when Pål Magnus Rybom started experimenting with electronic music. Later that year Fredrik Hansen joined and Echo Image was officially formed with Trine Bilet joining towards the end of the year providing backing vocals and keyboards. Bilet is featured on the front cover of the Endless Day EP.

Leiahdorus is a synthpop band on the independent Section 44 Records label.

T.O.Y. is a German futurepop/synthpop band. The project was formerly known as Evils Toy, which was closer to electro-industrial in sound.

Interface is an electronic music group based on Long Island, New York. It was founded in 1993 by Eric Eldredge. Its career has been lined with a steady output of songs and dance remixes for other artists and several lineup shifts. Each of its three albums to date display a blend of various styles of electronic music, most notably trance, synthpop, electro-industrial and aggrotech, with a strong sense of melody and songwriting.

Faith Assembly is a Synthpop project run by Mark Stacy, who founded the project and currently continues it in the USA. Stacy started out releasing recordings on his own Record Label, The Diary of Winter Publishing, and later was taken on by the record label A Different Drum. 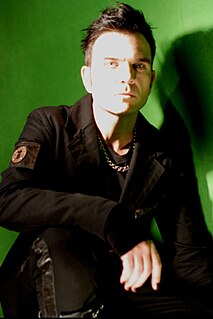 Christopher Anton, alternately styled christopher ANTON,, is an American singer-songwriter. Anton is known for being the vocalist of the synthpop band Information Society, as well as the synth rock band Pseudocipher. In 2010, Anton gained popularity as a solo artist with the release of his cover version of the dance single "Fade to Grey". After the success of "Fade to Grey", Anton released his debut album Destination: X.

Alter Der Ruine is an internationally touring electronic act based out of Tucson, Arizona that began in 2005. They are known for their creative diversity and intense live shows. Their current sound is a blend of Synthpop, indie, and electro although they started as a Power noise act. Each release has seen new and sometimes drastic influences creep in leading to an ever-evolving sound.

Crocodile Shop is an electro-industrial aggrotech EBM band formed in Berlin, Germany in 1987 by Mick Hale and R. A. Werner.

Section 44 Records is an independent record label and online store based in Colorado and specializing in electronic music and related genres. In 2004, Section 44 Records was formed by Pierre Norman and Randall Erkelens from the band Tristraum. Section 44 acquired the synthpop forum Sloth Radio and defunct label Kiss My Asterix Records. The label has released albums, singles, and compilations by The Alphabet Girls, Leiahdorus, Eight to Infinity, Eloquent, Empire State Human, Tristraum, and Tycho Brahe. Although based in the U.S., the roster includes international bands. Section 44 Records added Breye Kiser of Provision and Steven Cochran of Eloquent, and Royal Visionaries to its management and A&R in 2005.

Sebastian R. Komor is a Polish-born, Norwegian-raised electronica musician, best known for his collaborative work in Icon of Coil and Zombie Girl. A prolific artist, Komor has also released electronic music under a variety of solo projects and aliases since the late 1990s.

"Elis" is a song composed by the Electro-Gothic metal band Erben der Schöpfung, from its 2001 debut album Twilight. 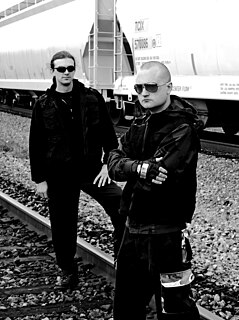 Asmodeus X is an American electro-industrial band whose music is frequently characterized as a mixture of EBM and darkwave and typically includes the use of environmental sampling. Their style is said to be influenced by the music of Laibach, Kraftwerk, Death in June, and Front 242, among others. The vocals have been described as following in the EBM/synthpop tradition of being “somewhat flat”, lending a “darker edge” to the music. The band is promoted as “the original and ex officio 'Black Corps' of the industrial underground”.

Rossetti's Compass is a synthpop and EBM music band created in November 2010 by the British musician Mark Warner. It was conceived from a desire to explore different directions in the electro musical sphere, from pure synthpop to dark and menacing electro and EBM. In 2013, the band released three albums, including a limited edition semi-live recording session. True to its self-imposed remit of exploration, the Rossetti's Compass catalogue of works includes track remixes for bands from across the genre, including A.W.o.L. Angst Pop, Kant Kino, HNN, Technomancer, Shatoo, Attrition, and Naked Lunch.

Ash Code is an Italian Dark Wave band formed in 2014 in Napoli by the singer Alessandro Belluccio, the keyboardist Claudia Nottebella and the bass player Adriano Belluccio. Ash Code music covers a wide range of genres including Dark Wave, post-punk, Synthpop and EBM. 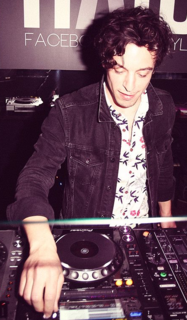 Anoraak is the musical project of French musician Frédéric Rivière, multi instrumentalist, singer, producer and DJ, former drummer of Pony Pony Run Run. and member of the Valerie Collective along with artists such as College, Maethelvin, The Outrunners, Minitel Rose and Russ Chimes. Coming from the rock scene at first, he later came to electronic music, starting Anoraak beside his drummer position.