A group of likeable slackers with little talent attempts to steal a prestigious jewellery collection exhibited at the highest floor of a tower. What they lack in experience, they make up for with street smarts. They think the stakes are too high for them, so they subcontract the heist, but swindle the subcontractor. They try to blackmail the exhibition's insurance agency, but end up tricked.

Lucio Fulci was an Italian film director, screenwriter and actor. 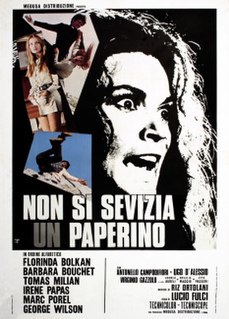 Nightmare Concert: A Cat in the Brain is a 1990 Italian horror film written and directed by Lucio Fulci. A Cat in the Brain is one of Lucio Fulci's final films and is self-reflexively summing up his career. The film is a meta-film in which the director appears playing himself, a tortured horror filmmaker who is driven by the violent visions that he experiences both behind the camera and off the set. Feeling like he's losing his grip on reality and disturbed by murderous fantasies, Fulci consults a psychotherapist. The "shrink" is a serial killer and using hypnosis, exploits the director's vulnerabilities to his own murderous ends. 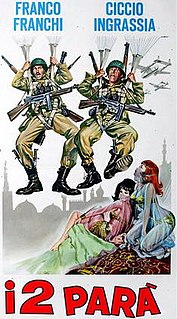 The Two Parachutists or I due parà is a 1965 Italian war comedy film directed by Lucio Fulci, starringh the comedy team of Franco and Ciccio.

Toto and the King of Rome is a 1952 Italian comedy film directed by Mario Monicelli and Steno. Italian horror film director Lucio Fulci worked on this film as an assistant director.

Ragazzi del Juke-Box is a 1959 Italian musical film directed by Lucio Fulci and starring Mario Carotenuto, Elke Sommer and Anthony Steffen. Lucio Fulci has a cameo in the film as a festival organizer. 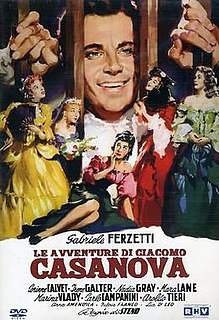 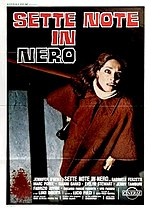 Sette note in nero is a 1977 Italian giallo film directed by Lucio Fulci and written by Roberto Gianviti and Dardano Sacchetti. Sette note in nero stars Jennifer O'Neill, Gianni Garko, Marc Porel, and Ida Galli. The film involves a woman who begins experiencing psychic visions that lead her to discover a murder, her husband is charged with the killing. The psychic must embark on an investigation with a paranormal researcher to clear her husband's name of the crime. 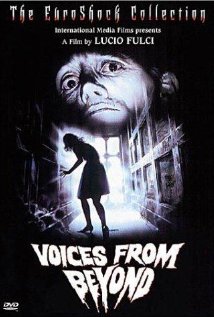 Voices from Beyond is a 1994 Italian horror film by director Lucio Fulci. The original shooting title of the film was Urla dal profondo. The story centers around the murder of a wealthy man despised by most of his relatives, with his spirit returning from the afterlife to guide his daughter in uncovering the identity of his killer.

Operazione San Pietro is a 1967 Italian comedy film directed by Lucio Fulci. The film is a sort of unofficial sequel to Operazione San Gennaro, a successful heist-comedy film that Dino Risi had filmed the previous year.

One on Top of the Other, also known as Perversion Story, is a 1969 Italian giallo film directed by Lucio Fulci. Written by Fulci and Roberto Gianviti, the film stars Jean Sorel, Marisa Mell, Elsa Martinelli, Alberto de Mendoza and John Ireland. The first giallo directed by Fulci, its plot concerns George Dummurrier (Sorel), an unscrupulous San Franciscan doctor who is suspected of orchestrating the death of his asthmatic wife Susan (Mell) as part of an insurance scam, despite her seeming reemergence as Monica Weston, a high-class stripper and prostitute.

My Sister in Law is an Italian commedia sexy all'italiana directed by Lucio Fulci and starring Edwige Fenech. 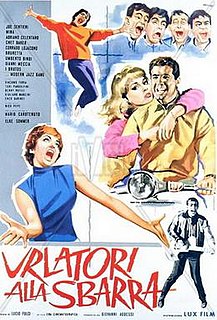 Howlers in the Dock is a 1960 Italian musicarello film directed by Lucio Fulci. It is also known as Howlers of the Dock in some reference books. The film was shown on Italian TV under a longer title, Metti, Celentano e Mina...Urlatori alla sbarra.

Renato De Carmine was an Italian stage, film and television actor. After graduating at the Accademia Nazionale di Arte Drammatica Silvio D'Amico, De Carmine worked mainly on stage, notably at the Piccolo Teatro in Milan under the direction of Giorgio Strehler. He also appeared in more than seventy films and television series and TV-movies, including Lucio Fulci's The Return of White Fang (1974). He died of acute anemia. 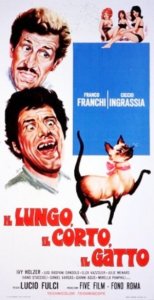 How We Robbed the Bank of Italy is a 1966 Italian crime-comedy film directed and co-written by Lucio Fulci, and starring the comedy team of Franco Franchi and Ciccio Ingrassia.

The Thieves is a 1959 Italian-Spanish criminal comedy film written and directed by Lucio Fulci and starring Totò and Giovanna Ralli.